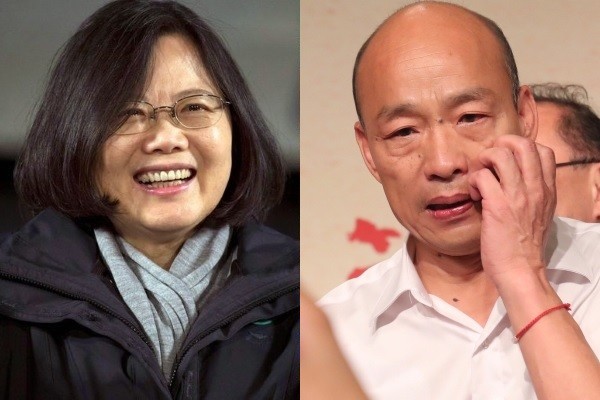 TAIPEI (Taiwan News) — Taiwan President Tsai Ing-wen (蔡英文) has continued to pull ahead of itinerant Kaohsiung mayor and Kuomintang (KMT) presidential candidate Han Kuo-yu (韓國瑜), according to the latest poll, despite the withdrawal of Foxconn tycoon Terry Gou (郭台銘) from the race.

Gou announced late on Monday (Sept. 16) that he would not take part in the 2020 presidential election, turning the race into a blue-green battle between Han and Tsai. According to the latest survey released by the Green Party, 49.1 percent of respondents chose Tsai, while only 32.25 percent opted for Han.

This represents a gap of 17 percent, with Tsai maintaining an even greater lead than the 16.3 percent shown in an ETtoday poll posted last week. The Green Party said that it was the largest gap seen so far in its presidential election polls.

The survey was carried out in collaboration with the SET TV show "Just Want to Complain" (94要客訴) on Tuesday (Sept. 17). With Gou's announcement that he was dropping out of the race, the Green Party said it had anticipated a bump for Han.

However, the survey results actually showed a slight increase in support for Tsai and significant decline for Han. As the gap between Tsai and Han widens, 60 percent now believe Tsai will defeat Han in the general election.

On its Facebook page, the Green Party said that the results showed that many recent disputes involving Han have caused him to lose the trust and support of voters. "It appears Han became his own worst enemy," said the Green Party.

The poll was evenly distributed between cell phones and landlines. A total of 787 valid samples were collected with a 95 percent confidence level and a sampling error of plus or minus 3.49 percentage points.