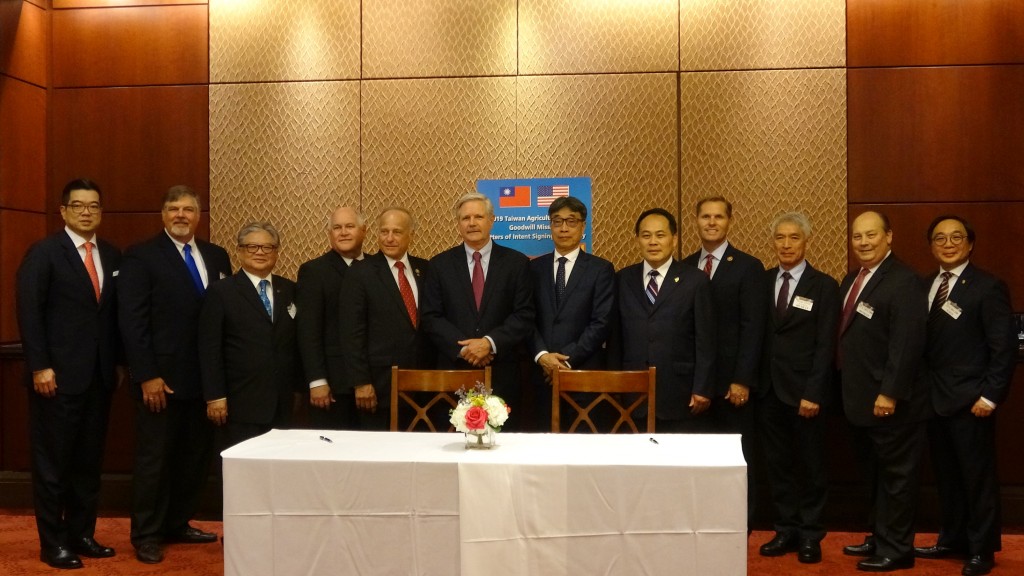 TAIPEI (Taiwan News) — A Taiwanese delegation signed an agreement with the U.S. on Wednesday (Sept. 18) to purchase billions of dollars worth of corn, soybeans, and beef from American farmers.

The delegation, led by Council of Agriculture Deputy Minister Chen Junne-jih (陳駿季), sealed the US$3.7 billion (NT$114 billion) deal with local agricultural companies on Capitol Hill on Wednesday (Sept. 18). David Stilwell, assistant secretary of state for the Bureau of East Asian and Pacific Affairs, attended the signing ceremony to show his support for the economic ties between the two countries, according to reports.

Over the past four decades, Taiwan and the U.S. have developed a comprehensive and long-enduring relationship, sharing common interests and values based on the Taiwan Relations Act and “one-China” policy, remarked Stilwell. The first of his post to attend an event hosted by the Taiwanese authorities, Stilwell said the ceremony can be seen as an example of the two countries’ solid friendship.

A bipartisan group of more than 20 representatives and senators were among those who witnessed the signing of the memorandum of understanding, including those representing the states of Oklahoma, Georgia, Kansas, and Minnesota, where agriculture plays an important role in the local economy.

Taiwan has agreed to buy high-quality U.S. agricultural goods in large quantities and with better prices, said Chen. He expressed hope that the purchase of U.S. products will further deepen the bilateral relationship in trade and other areas.

According to the agreement, Taiwan will buy corn, wheat, soybeans, and beef from the U.S. Chen said the government’s policy toward U.S. beef exports remains unchanged and that the beef being purchased is among the products already approved by the government.

Congressman Ted Yoho, a member of the House Committee on Foreign Affairs, said the deal represents closer ties between the U.S. and Taiwan. It sends a signal to the world that the U.S.-Taiwan relationship will only become more robust in the future, he said.