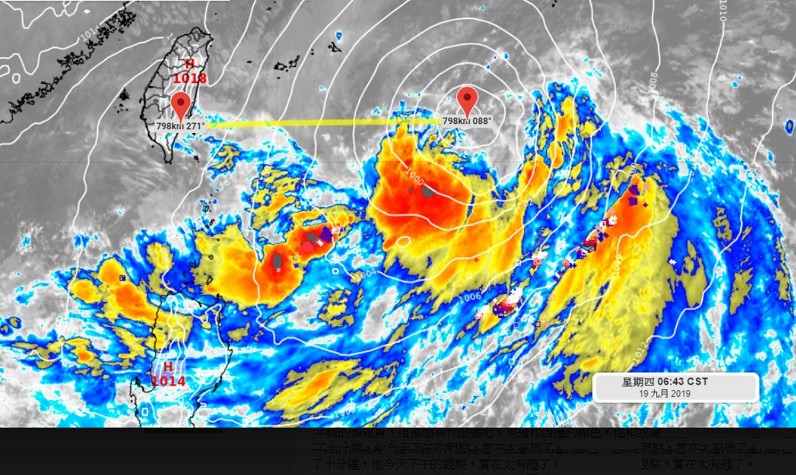 TAIPEI (Taiwan News) — A tropical depression to the southeast of Taiwan is moving northward, liking bringing rain to northern and northeastern Taiwan and possibly intensifying into a tropical storm.

The Central Weather Bureau (CWB) said that the outer bands of clouds from the tropical depression are starting to affect Taiwan and strengthen northeasterly winds. The clouds have already started bringing intermittent rains to northern and northeastern Taiwan, and the mountainous areas of central and southern Taiwan could also see scattered showers.

The tropical depression, which is about 800 kilometers east of Taitung, has continued to integrate over the past two days. At present, it has a good chance of intensifying into Tapah, the 17th tropical storm of the year.

The CWB said that, due to the northeasterly winds, there will be strong gusts registering at 8 to 10 on the Beaufort scale in Kaohsiung, eastern Taiwan, the Hengchun Peninsula, Penghu, and Matsu. Large waves and powerful riptides are likely along coastal areas. As for temperatures, the weather bureau said that lows on Thursday morning would range between 23 and 26 degrees Celsius. Due to rainfall, northern Taiwan will experience highs of 29 to 31 degrees while the rest of the island will see highs of 32 to 34 degrees.

With the center of the depression so close to Taiwan, there is a strong chance the country may at least be affected by its periphery. WeatherRisk Explore Inc. President Peng Chi-ming (彭啟明) predicted that the tropical system will be at its closest to Taiwan on Friday (Sept. 20) and Saturday, when its peripheral circulation will affect the northern and northeastern parts of the country.

Peng said that the tropical system is likely to pass between Japan's Miyako Island and southwest Okinawa Island, thus missing Taiwan's maritime area. However, if it shifts slightly westward, Taiwan will feel a stronger impact, according to Peng.