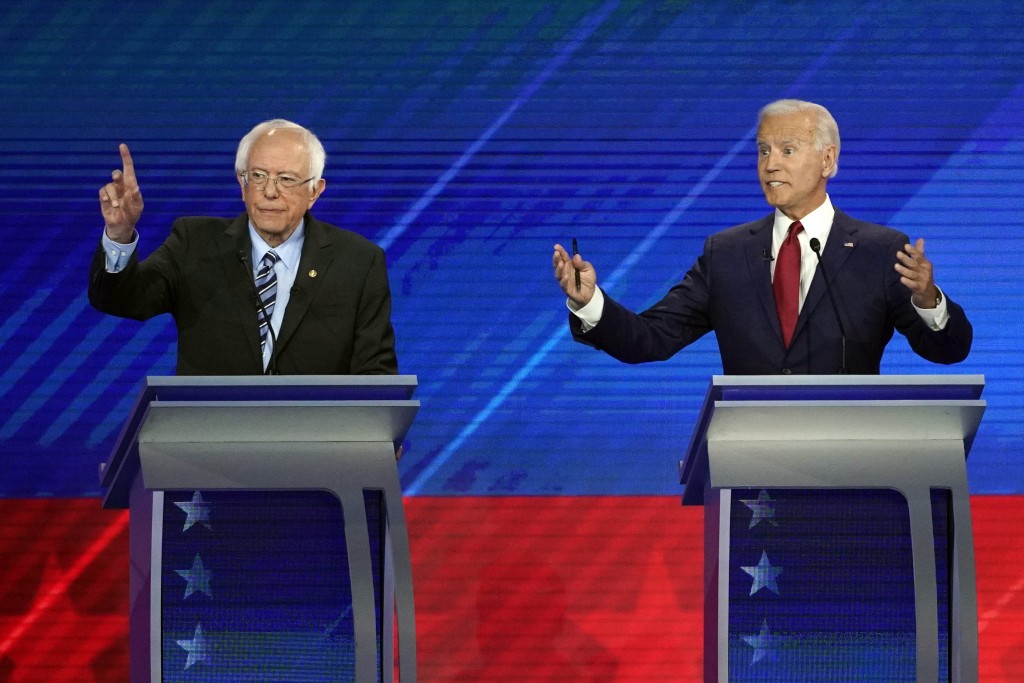 PHILADELPHIA (AP) — The high-stakes fight for working-class voters moved to Pennsylvania on Tuesday as a slate of Democratic White House hopefuls vowed to use the power of the presidency to crack down on corporate America and strengthen organized labor.

But beneath all the agreement at the AFL-CIO conference, a feud between two leading candidates, Joe Biden and Bernie Sanders, began to spill out into the open. Neither mentioned the other by name onstage. Yet both moved to undermine the other's credibility with a group of voters that may hold the key to the 2020 presidential election.

Sanders was the most aggressive when he ticked down a list of unpopular votes from Biden's decadeslong record in politics as he faced hundreds of union members in a Philadelphia convention hall.

Speaking to reporters afterward, the Vermont senator repeatedly called out Biden by his first name, charging that "Joe" has a long record of voting against the interests of the working class.

"All I wanted to do today was make it clear that in terms of the needs of working people, I don't have a record I have to apologize for," Sanders said.

Earlier in the day, Biden took a jab at Sanders by reminding union members that the health care plan championed by the Vermont senator — known as "Medicare for All" — would ultimately force union members from their private insurance plans to a government-backed system.

"In mine, you can keep the health insurance you bargained for if you like it," Biden said.

The tension between the two leading candidates came during what organizers called a "workers' presidential summit," an event in downtown Philadelphia that gave the Democratic Party's 2020 class an opportunity to speak to hundreds of union officials in a premier swing state.

A Warren spokeswoman said she had "prior commitments" in New York, noting that she attended an AFL-CIO forum over the summer.

Arguably, no group of voters will play a more critical role in 2020 than those gathered at the Pennsylvania Convention Center on Tuesday afternoon. Trump won the presidency on the backs of white working-class voters in Pennsylvania, Michigan in Wisconsin — three states that hadn't supported a Republican for president in almost three decades before Trump.

Biden has built his decades-old political brand as a native of working-class Scranton, Pennsylvania. He reminded union members on Tuesday about his nickname "Working-class Joe" and called labor unions "the backbone of the country."

Yet his long record in Washington gives his rivals in both parties ample political ammunition. Some conference attendees received flyers highlighting the low points of Biden's record.

The former Delaware senator is the only 2020 Democratic candidate who voted to support the North American Free Trade Agreement. As vice president, he helped implement a rescue package for the nation's big banks. He also wrote a 2005 bankruptcy bill backed by credit card companies. And as the only 2020 contender in Congress back in 2002, he is the only candidate who voted to authorize use of military force in Iraq.

Biden also supported the trade deal written by the Obama administration known as the Trans-Pacific Partnership that Trump ultimately killed once he took office. Still, in the Senate, he voted against a number of trade deals, including those with Singapore, Chile and Oman.

Until Tuesday, there was little public tension between Sanders and Biden, although Sanders, like other Democratic contenders, has long hoped that Biden's early advantages in the Midwest would ultimately fade because of his record on trade.

Sanders, by contrast, aggressively opposed the trade deals. That's not to say Sanders does not have tough questions to answer, however.

His signature health care plan, Medicare for All, would end the private insurance system. That's something many union members oppose because it would wipe away the health care benefits they fought to win.

But on Tuesday, Sanders was decidedly on offense.