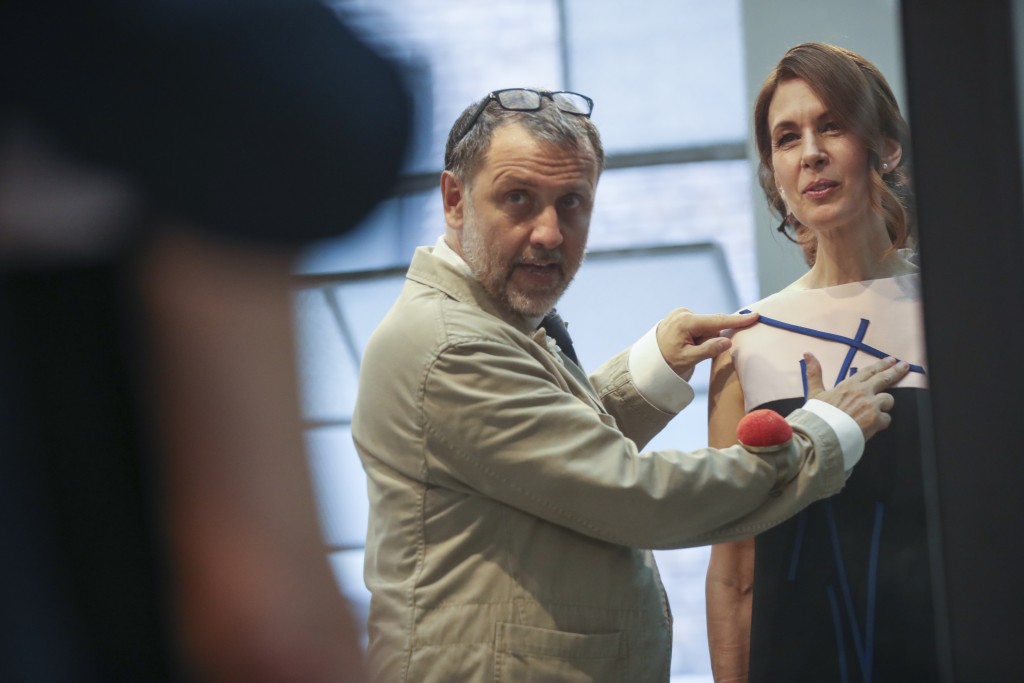 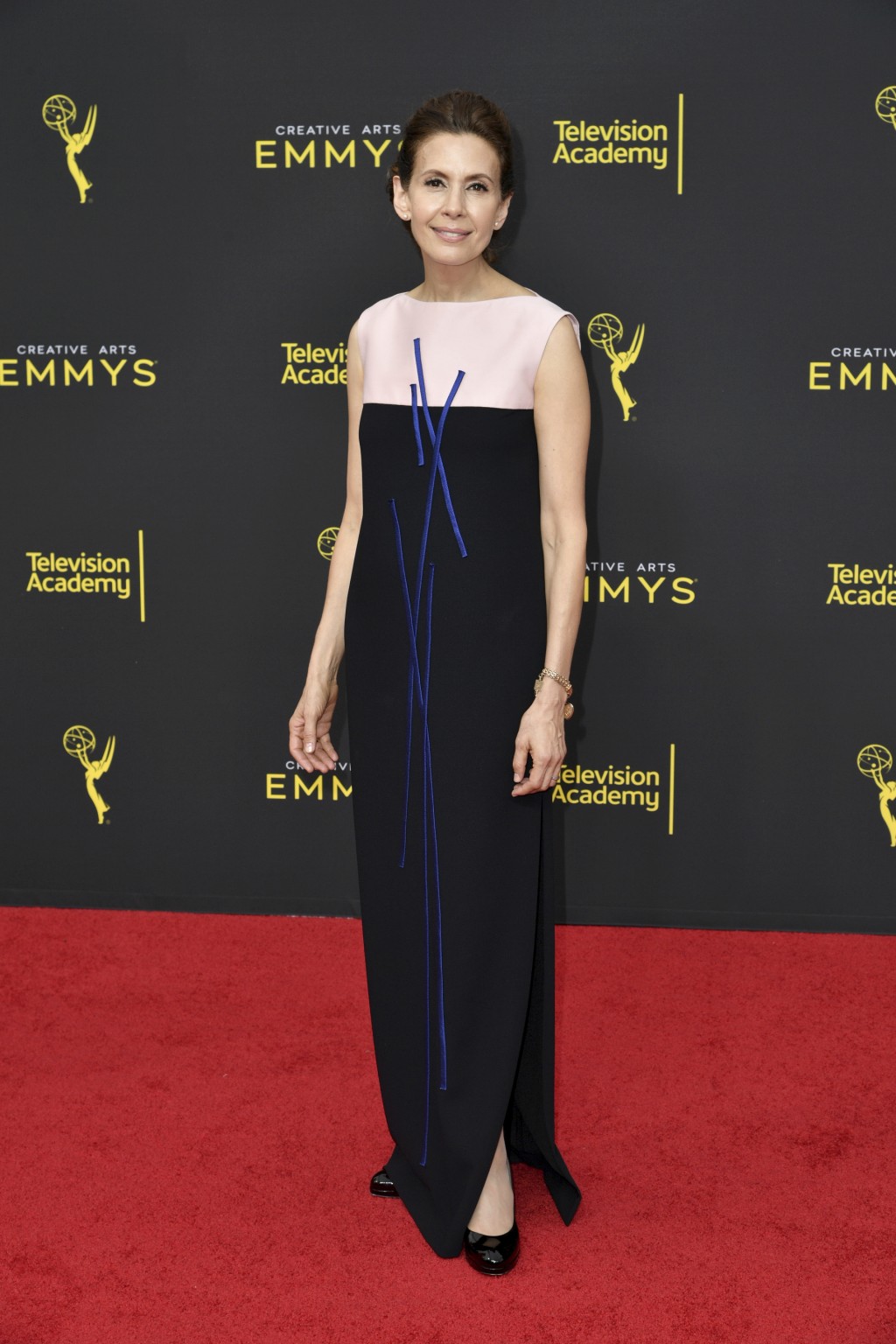 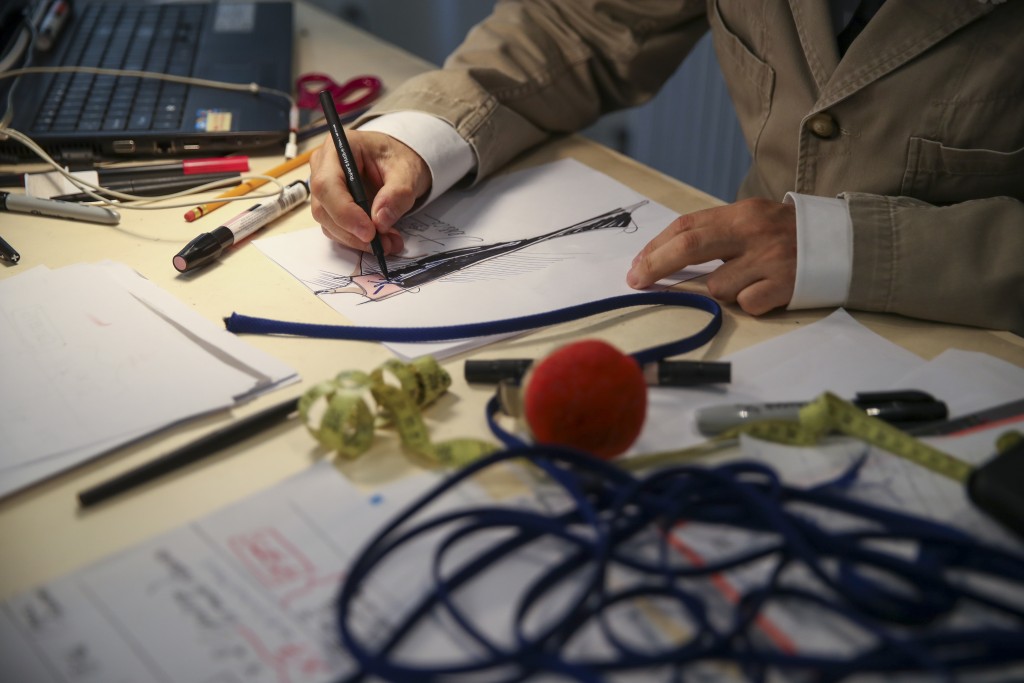 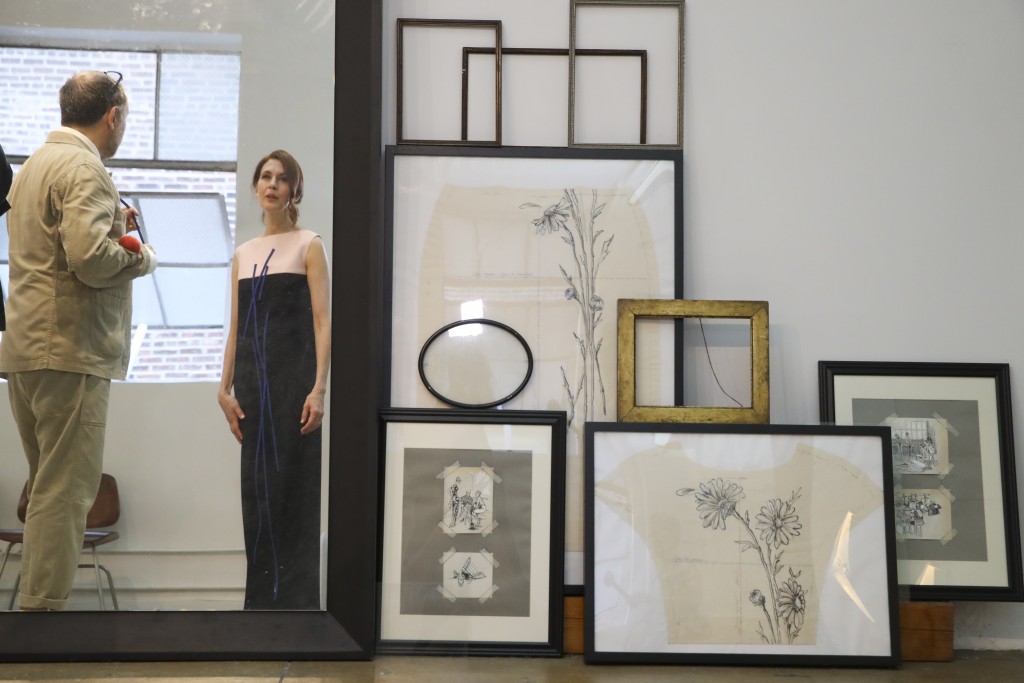 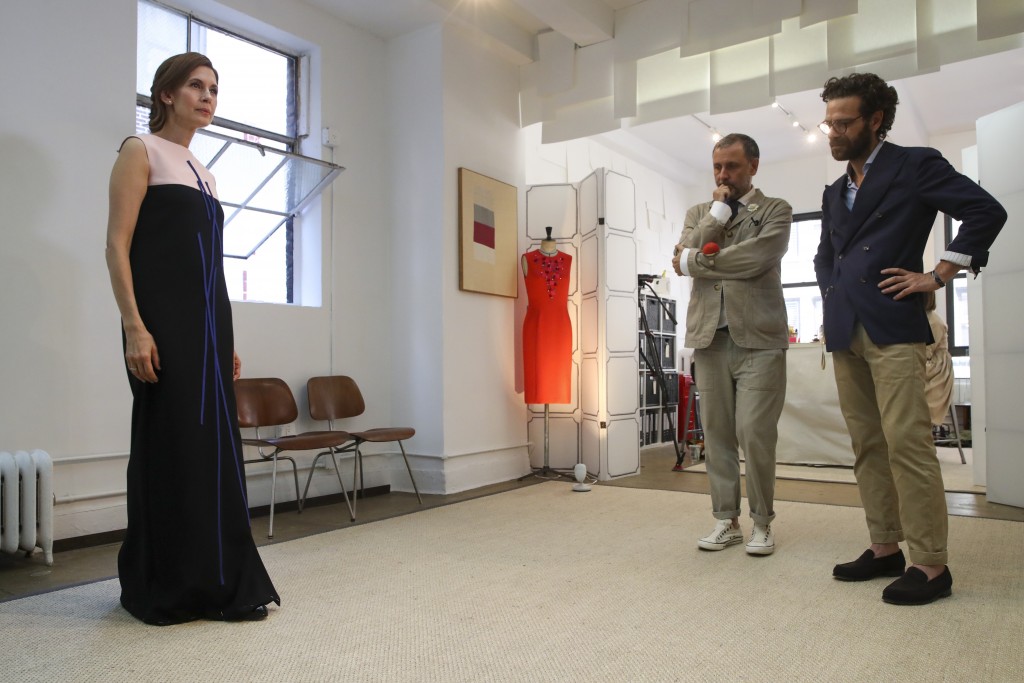 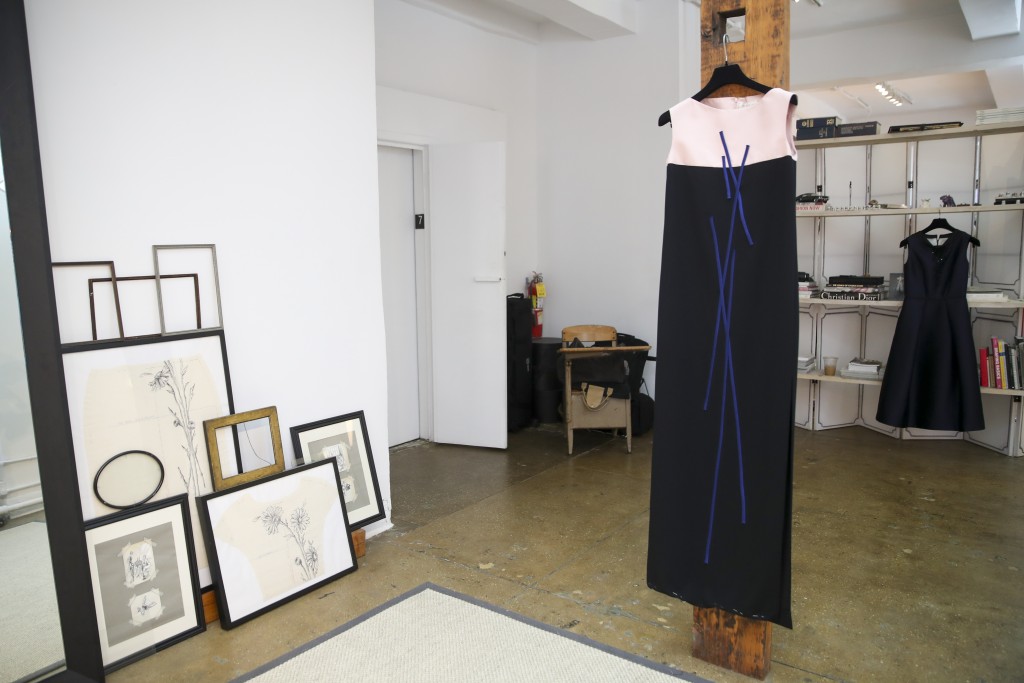 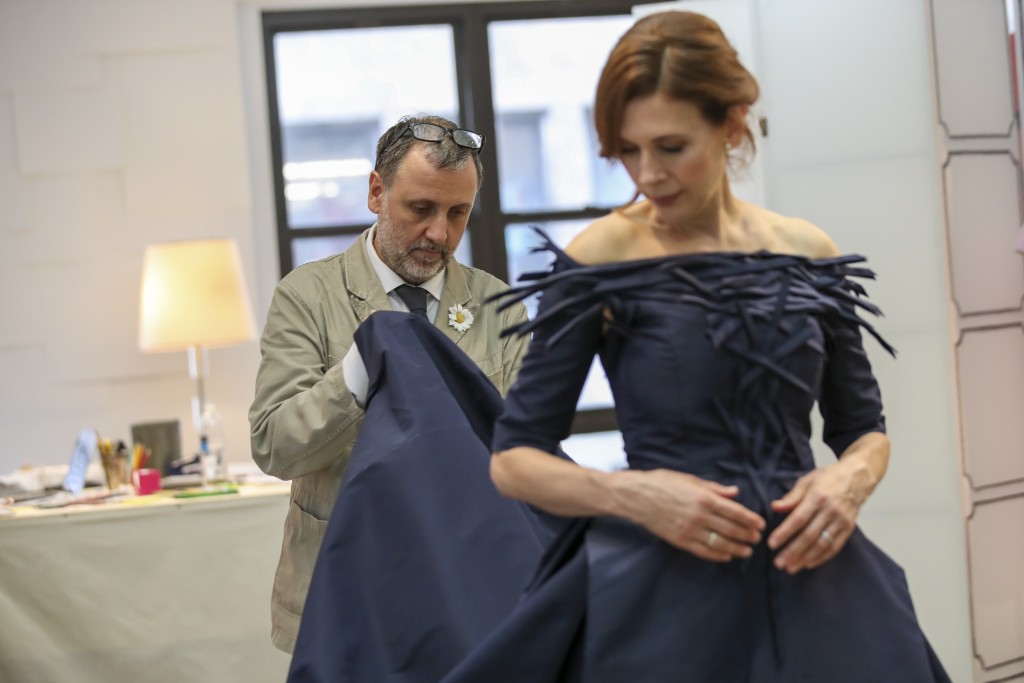 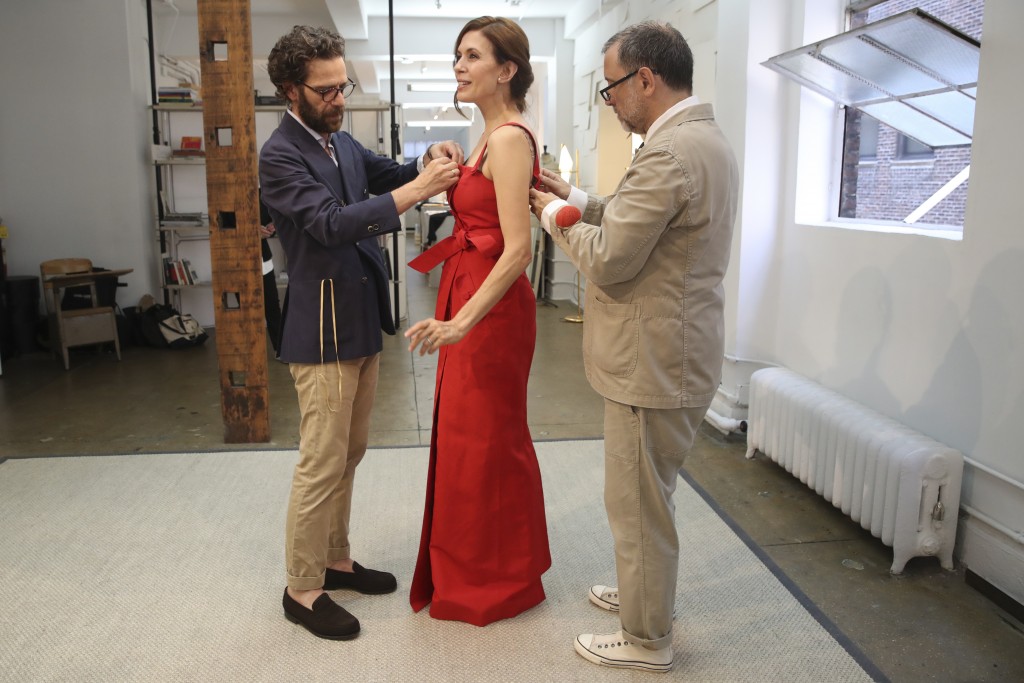 NEW YORK (AP) — Jessica Hecht, the "Special" actress, inherited at least a couple of things from her mother: "I'm lucky to be sample size. My mother gave me many gifts and this was a very specific one."

That, she laughed, and "a lot of neurosis."

Being a size 2 came in handy as Hecht was deciding on just the right red carpet look for her big night Sunday at the creative arts Emmys, to air Saturday on FX ahead of the main slate. She didn't win, but she had a ball picking out a dress.

For fashion assistance, she headed straight to Atelier Caito for Herve Pierre, a nearly 2-year-old collaboration between the Frenchman who styles first lady Melania Trump, and Nicolas Caito, a compatriot and veteran patternmaker.

While creative director at Carolina Herrera, Pierre dressed the 54-year-old Hecht a couple of times. For the Emmys, he offered several options on her fitting visit to the fledgling brand's airy studio, where workers cut and sewed at high tables as others tapped on their laptops nearby. Of three dresses, one stole Hecht's heart and had her beaming on the red carpet.

It was a bicolor column gown with an empire bodice in peony pink silk and wool, and a skirt in black silk crepe. Skeletal lines in silk pique applique, in an ultramarine blue inspired by a painting by the post-war French nouveau realist Yves Klein, adorned the front, from just below the neck to just above the hem.

A side slit wasn't too daring and offered movability.

"The cut is perfect," Hecht told Pierre and Caito as she inspected herself in a full-length mirror, gently touching the fabrics as she practice-walked in a pair of comfortable black heels she had brought along. "I could eat a dinner in this dress. When you stop breathing, it's the worst."

And the other options? There was a sporty, sleeveless, bright red trench-style with buttons, and a sexy navy gown with a full skirt. The blue was off the shoulder with tight sleeves that stopped at the elbows. Cutouts in the underarms lent comfort and mobility. It had a riot of three-dimensional line applique up top that extended off the dress at the neck. And it had a train.

Hecht wasn't looking, in particular, for a train. The black just skimmed the ground.

Pierre quoted Coco Chanel as he listened to Hecht's short but sure reasons for loving the black.

"Mademoiselle Chanel always said if you spend more than 10 minutes to describe a dress, it means that the dress is wrong," he said. Hecht needed far less.

There's a word in Yiddish that Hecht's mother uses "to describe a dress that has too much going on, which is ungapatchka," she told Pierre.

Hecht wasn't interested. She wanted simple elegance, from her planned chignon hairstyle and simple jewelry to the shoes she hand-carried from the Upper West Side.

Hecht said it was important that her dress honor the tone of "Special," the show for which she was nominated. It's a short-form Netflix series based on the memoir of Ryan O'Connell, who stars, writes and executive produces the first season. O'Connell, who is gay with mild cerebral palsy, decides to leave home for the first time, along with his loving, ever-attentive mother, to strike out on his own. Hecht deftly plays the mom, Karen Hayes, in the eight episodes of 15 or so minutes each.

"In some way, I want to reflect the integrity of the show," Hecht said of her Emmys look. "There's something quirky and kind of sensitive about the show that I wanted to find in the dress."

Hecht extolled the virtues of the pockets on the red and blue gowns. The black was bereft, but it wasn't enough to knock it out of first place.

At awards ceremonies, Hecht said, "people have a whole way of being." In the black, she said, she could be the "mystery to define that dress."

A mother of two, including her Emmy date Stella, Hecht said it would have been "nerve-wracking" to wear a dress that put her on display, required tape in strategic spots, or screamed for special undergarments.

Of the splashy look so many celebrities go for on red carpets, she said: "The wow factor is always exciting for the viewer but you sort of wind up comparing who was blingiest, and that to me is sort of not the point of the event. I'm more interested in seeing the person underneath the dress. The wow factor is maybe great when you're under 30."

The navy had a bit of wow. She said it would be great in a film, especially if one is dramatically running away, which she was not.

The new series isn't Hecht's first turn at television. She's perhaps best known for supporting roles in "Friends" and "Breaking Bad." The lesbian wedding of her character, Susan Bunch, to Ross' ex-wife, Carol, made a "Friends" splash in 1996.

As an Emmy nominee, Hecht said she was most nervous about what she was going to wear because, "I didn't want to be self-conscious. At this stage in my life, it's like a great party. I wasn't really thinking anything like this would happen."

Pierre dressed Hecht for the Tonys seven or eight years ago.

"I just loved the way he thinks. He makes all these incredible references to art, which makes me feel elevated," Hecht said.

She loved the hint of the "perfect" blue hue in the line embellishment on the gown she chose. It made her feel as if "she's been dropped into this beautiful simple painting that I can inhabit and not think too much, and that's my whole goal."

And what would her "Special" character, Karen Hayes, have to say about her choice?

"She would think it was really unique," Hecht said. "She'd be thrilled because I chose something different."