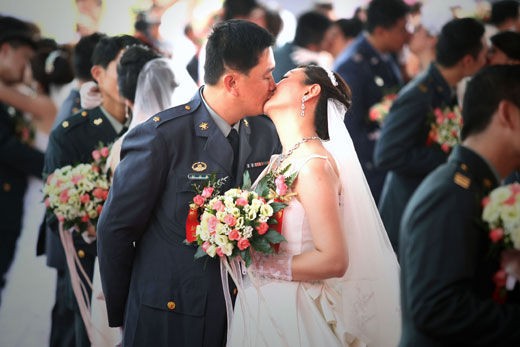 TAIPEI (Taiwan News) -- For the first time ever, three same-sex couples have signed up for the annual mass military weddings for two branches of Taiwan's armed services.

According to Ministry of National Defense (MND) statistics, three same-sex couples have signed up to take part in Navy and Air Force collective weddings this fall, reported UDN. The Air Force will have a male-male couple participate in its mass ceremony, and the Navy event will see both a male-male and female-female couple wed, but the Army does not yet have a same-sex couple registered for its group wedding, reported CNA.

The Air Force's mass wedding is slated for Oct. 26 at Pingtung Airbase. Based on the practice in previous years, an Air Force commander will likely ask the newlyweds to kiss for 99 seconds at the climax of the ceremony. The Navy, led by the Marine Corps Command, is expected to hold its group wedding on November 15, and the details are still in the planning stages. According to local reports, the Air Force couple includes an officer, while the two Navy couples are made up of non-commissioned officers.

The Army Command on Sunday (Sept. 15) said that the implementation plan of the 2019 mass wedding ceremony will be the same as previous years. All Army volunteers who meet the legal requirements of Taiwan can sign up for its group wedding event.

By the time registration closed for the Army's 2019 mass wedding ceremony at the end of August, a total of 154 couples had signed up. The Army emphasized that its position remains unchanged and that all qualified officers and enlisted soldiers are welcome to sign up for the ceremony. The MND said that it handled the applications this year, the first in which same-sex marriage has been legal in Taiwan, in accordance with administrative principles. Officers, non-commissioned officers, and enlisted personnel who submit registration forms to military headquarters before Dec. 31 of this year can participate in next year's joint marriage ceremony upon completion of the review process.