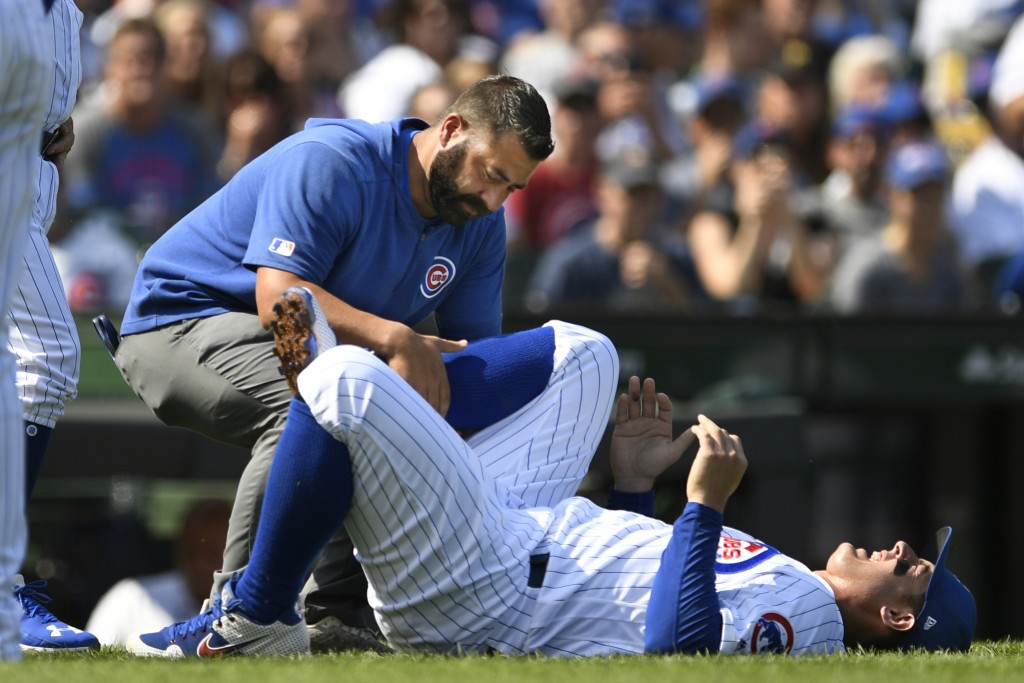 CHICAGO (AP) — Star first baseman Anthony Rizzo was pulled from a game Sunday with a sprained right ankle, putting a damper on the Chicago Cubs' 16-6 victory over the Pittsburgh Pirates that completed a three-game sweep.

Rizzo was injured fielding a bunt at first base, had to be helped off the field and could not put pressure on the leg. X-rays taken at Wrigley Field showed no fractures. He'll get an MRI on Monday.

Chicago's postseason pursuit has already been hindered by an injury to shortstop Javier Báez, who is out for the rest of the regular season with a hairline fracture of his left thumb.

The Cubs maintained their one-game lead over Milwaukee for the second NL wild card.

Kris Bryant homered twice, and Ian Happ, Kyle Schwarber and Jonathan Lucroy also connected for the Cubs, who outscored the Pirates 47-15 in the series.

ST. LOUIS (AP) — Ryan Braun overcame a 4-3 deficit with a grand slam off Junior Fernández with two outs in the ninth. Milwaukee won for the ninth time in 10 games and closed within three games of the NL Central-leading Cardinals.

Tommy Edman hit a two-run homer with one out in the bottom half off Josh Hader, who struck out Harrison Bader and pinch-hitter Tyler O'Neill for his 33rd save. Bader hit a pair of solo homers.

TORONTO (AP) — Pitchers Dellin Betances and Jordan Montgomery made their season debuts for the Yankees after lengthy layoffs.

Betances, a 31-year-old right-hander, recovered from a strained lat muscle and struck out Reese McGuire and Brandon Drury, his only two batters. New York hopes Betances will be a factor in the playoffs, joining an already strong bullpen that includes Aroldis Chapman, Zack Britton, Adam Ottavino, Tommy Kahnle and Chad Green.

Recovered from Tommy John surgery, Montgomery made his first major league appearance since May 1 last year. He allowed three runs and four hits in two innings. He threw 26 of 41 pitches for strikes.

Randal Grichuck homered twice, including a tiebreaking three-run drive in the fifth off Nestor Cortes Jr. (5-1).

Andrew Benintendi had a pair of hits for the defending World Series champions, who have won three in a row. Boston began play trailing Tampa Bay by 10 games for the AL's second wild card.

Rick Porcello (13-12) allowed two runs and five hits in five innings, and Brandon Workman pitched a scoreless ninth for his 14th save.

Rhys Hoskins homered for Philadelphia, which fell 4½ games behind the Cubs.

PHOENIX (AP) — Eugenio Suárez homered twice to tie the New York Mets' Pete Alonso for the major league lead with 47 homers, and Trevor Bauer (11-12) held his former team to one run and four hits over eight innings as Arizona dropped 5½ games behind the Cubs

Raisel Iglesias pitched the ninth for his 31st save.

DETROIT (AP) — Edwin Jackson (3-10) allowed five runs in five innings for Detroit (44-104), which lost two of the first three games of the four-game series against the Orioles (49-100) and opened a 4½-game advantage for the worst record in the major leagues — and the top pick in next June's amateur draft.

Asher Wojciechowski (3-8) won for the first time since July 26, allowing two runs and eight hits in five innings. He had been 0-5 in his previous eight starts.

Howie Kendrick homered and drove in three runs as Washington clinched its eighth winning season in a row and remained 1½ games ahead of Chicago for the top NL wild card.

Atlanta's magic number to clinch the NL East remained at four as the Braves were blanked for the fourth time, the fewest in the NL.

KANSAS CITY, Mo. (AP) — Wade Miley (14-5) allowed two runs and in six innings, rebounding from a pair of bad starts, and Houston tied the Yankees for a big league-leading 98 wins.

Rookie left-hander Jesus Luzardo allowed one run over three innings for his first big league save.

Tampa Bay trailed 6-1 before Austin Meadows' 31st homer, a three-run drive off Ty Buttre with two outs in the eighth. Hansel Robles struck out pinch hitter Ji-Man Choi, then worked around a leadoff walk in the ninth for his career-high 21st save.

CLEVELAND (AP) — Roberto Perez hit a three-run homer for the Indians, who lost two of three to Minnesota and trail the AL Central-leading Twins by 4½ games

Eddie Rosario homered twice and Miguel Sanó and rookie LaMonte Wade Jr. connected as the Twins became the 13th team — and first since the 2009 Philadelphia Phillies — to have four players reach 30 homers in the same season.

Tyler Rogers (2-0) struck out one in a perfect eighth, and Will Smith worked around a walk and a wild pitch in the ninth for his 33rd save. Giants rookie Mauricio Dubón homered.

San Diego (68-81) has not won more than 77 games since 2010. The Padres are one defeat from matching the team mark for consecutive losing records, set from their expansion season of 1969 through 1977.

SEATTLE (AP) — José Ruiz (2-2) walked Tom Murphy with the bases loaded in the ninth, giving Seattle its second straight walk-off win. Kyle Lewis hit a three-run homer in the eighth that cut the Mariners' deficit to 10-9, the fourth homer during his first week in the major leagues.

Austin Adams (2-2) struck out Chicago's Nos. 1 through 3 batters in the top of the ninth.