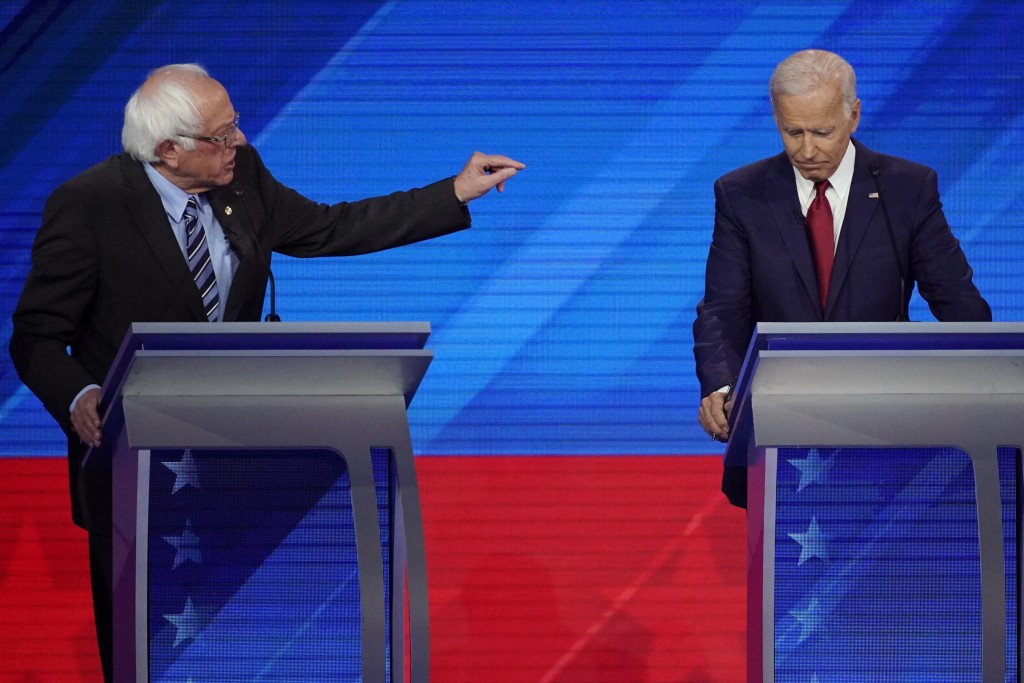 Campaigning in the early caucus state of Nevada, the 78-year-old Vermont senator said one of the things that "disturbed" him about Thursday's debate was that he was hoping "to have a serious discussion about the health care crisis in America."

"I was not pleased that Vice President Biden distorted what Medicare for All is and, in fact, simply parroted the line coming from the health care industry," Sanders told about 300 people at a town hall meeting at the Carson City Convention Center.

"Apparently the vice president thinks it is just wonderful for people to be paying $1000 a month ... just for health care premiums. Having deductibles of $4,000 or $5,000 or more — not a problem. Paying the highest prices in the world for prescription drugs — not a problem. Well, I think those are problems," he said.

Sanders took heavy fire on his single-payer health insurance proposal at Thursday night's debate in Houston, with Biden and others hammering the Vermont senator for the cost and the political palatability of effectively eliminating the existing private insurance market.

The former vice president went hardest at Sanders when the senator argued that the estimated $30 trillion cost over a decade is cheaper than the "status quo," which he put at $50 trillion — with most of the money being what Americans spend privately on premiums, copays and out-of-pocket costs. Sanders' argument is that most U.S. households would pay less overall under his system, even if their taxes go up.

Biden said that Sanders would effectively be handing Americans a pay cut, arguing that employers who now pay a share of workers' premiums would pocket that money instead of giving workers raises if the government were to cover all health care costs. Biden punctuated the point with one of the quotes of the night: "For a socialist, you've got a lot more confidence in corporate America than I do."

Biden has aggressively defended the Affordable Care Act that was created while he was vice president under President Barack Obama. Biden released a proposal in July to add a "public option" to the 2010 health care overhaul, with expanded coverage paid for by tax increases on the wealthiest Americans.

Sanders repeated his refrain Friday that health care is a human right and that Medicare for All would cover every man, woman and child in the country. It requires no premiums, no deductibles and no out-of-pocket costs and would expand Medicare to include such things as dental care, hearing aids and home health care, he said.

"It's not a terribly radical idea because in one form or another it exists in countries all over the world, including Canada," Sanders said. "Is it free? No. It is funded out of the general fund in a progressive manner."

Sanders said the primary function of the existing American health care system — the costliest in the world — is to make profits for drug and insurance companies. He dismissed a concern raised by a supporter of President Donald Trump in the audience who suggested Medicare for All would prevent him from selecting his own doctor.

"You can go to any doctor you want," Sanders said. "Anybody who tells you Medicare for All limits your choices of doctors are not telling you the truth."

Sanders lost the 2016 Democratic caucuses in Nevada to Hillary Clinton 55% to 45% primarily because of her strength in Las Vegas and Clark County. But he carried northern Nevada's Washoe County, where he scheduled a rally Friday evening at the University of Nevada, Reno.

He also planned to campaign Saturday in Las Vegas.