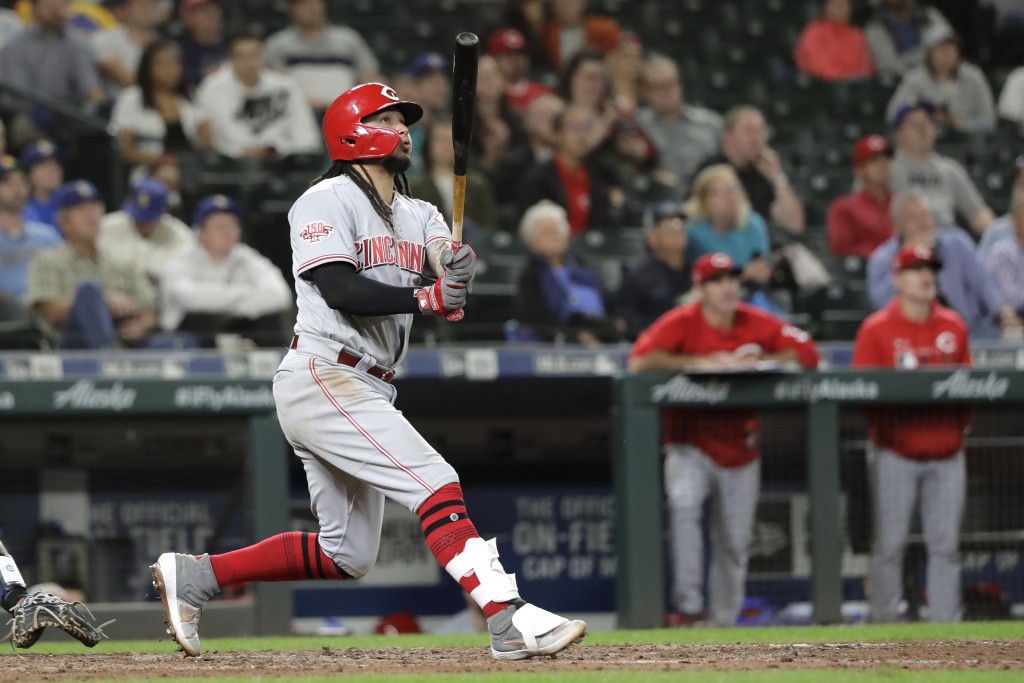 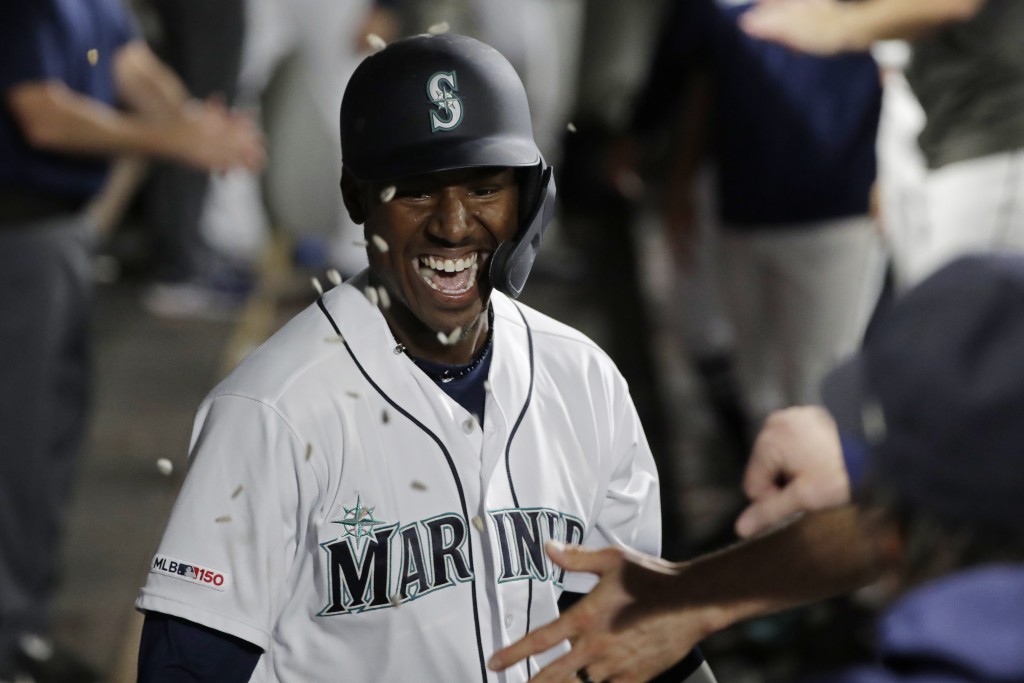 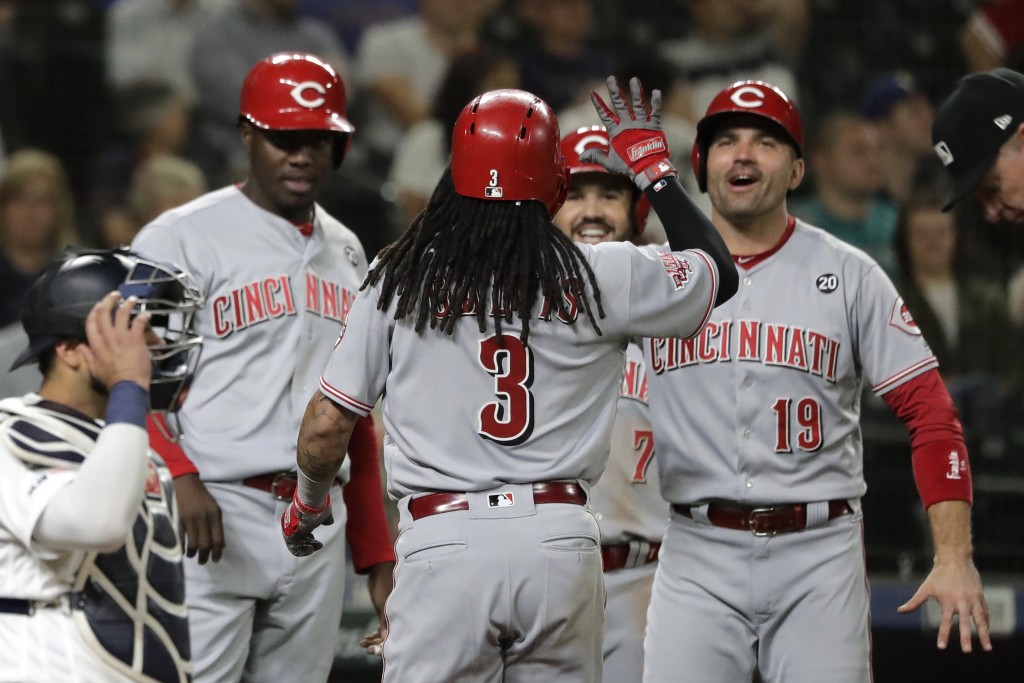 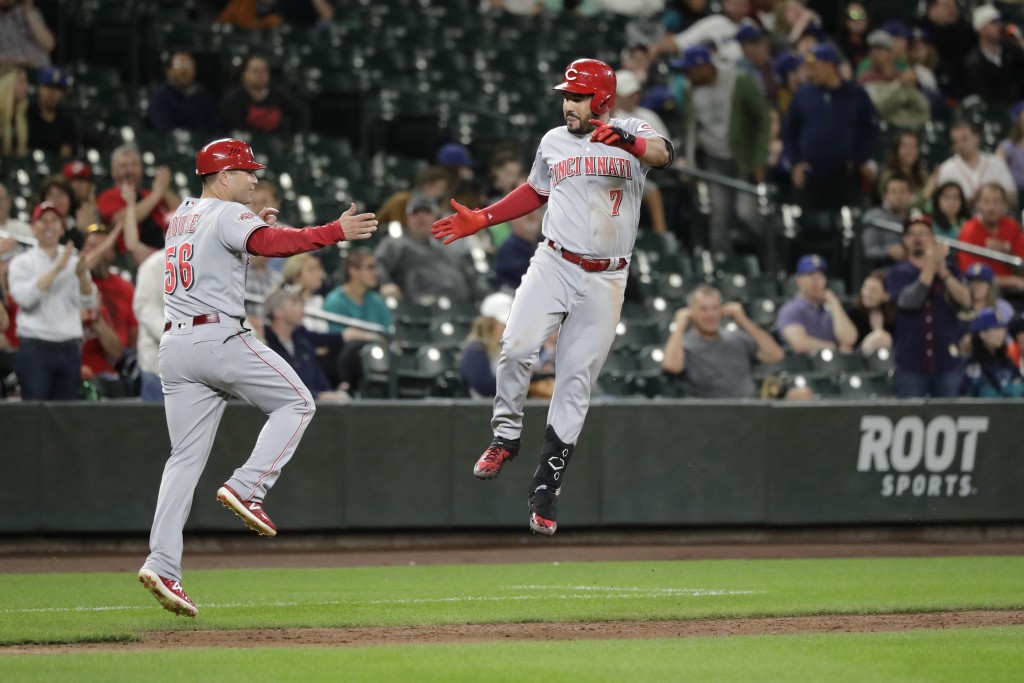 Galvis' second slam of the season and third of his career capped a five-run rally in the seventh inning for a 7-5 lead.

Lewis hit a solo shot off the scoreboard in left field in the fifth, becoming just the second player in major league history to homer in each of his first three games.

Lewis joined Trevor Story as the only players to accomplish the feat. Story connected in his first four games — totaling six homers in that span — for Colorado in 2016.

The 24-year-old Lewis, the picked 11th overall in the 2016 draft, also doubled and singled.

Called up Tuesday from Double-A Arkansas, Lewis homered in the fifth inning for Seattle's first hit against the Reds' Trevor Bauer. On Wednesday, he homered in the seventh to end Sonny Gray's no-hit bid.

Seattle tied a team record by starting seven rookies. Dylan Moore connected for his ninth home run since making his debut this year and shortstop Donnie Walton picked up his first career hit.

Not all the Mariners rookies had as much success, though.

Highly regarded prospect Justin Dunn started for Seattle and walked five before getting pulled with two outs in the first inning. He gave up sacrifice flies to Aristides Aquino and Phillip Ervin and 37 pitches, 23 for balls.

Moore's homer tied it at 2 in the second and Omar Narvaez added his career-high 20th home run for a 4-2 lead in the third.

With the appearance of Dunn and fellow rookie pitcher Art Warren, the Mariners extended their major league record to 67 players used this season and set a new standard with 42 pitchers taking the mound. The previous record of 40 pitchers was shared by the 2017 Mariners and the 2014 Texas Rangers.

Reds: It's highly unlikely CF Nick Senzel will play again this season, general manager Dick Williams said. An MRI shows Senzel has tears in the labrum of his right shoulder. Senzel will meet with doctors to determine the extent of the injury.

Williams said Senzel might not require surgery, and that even if he does, he would likely be ready for spring training.

Mariners: OF/DH Domingo Santana (right elbow strain) could see the field this weekend or early next week, manager Scott Servais said. Santana began throwing lightly on the Mariners' last road trip. Servais said he'll be available as a pinch-hitter or DH at first and could return to his right field position during the final homestand of the season. . Reliever Matt Magill was available again Thursday after missing several days with a sore back.

Mariners: LHP Yusei Kikuchi (6-9, 5.24 ERA) will open the home series against the Chicago White Sox. He's allowed one run and seven hits in his last two appearances, striking out 13 over 14 innings.