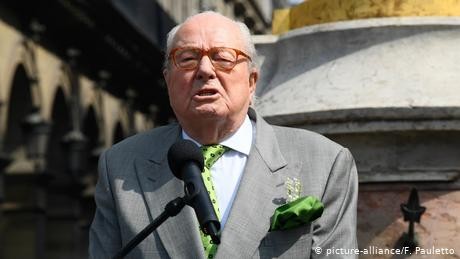 The charges surround allegations that the former leader of the far-right party for more than 40 years illegally claimed money from the European Parliament to pay his France-based staff, lawyers said.

The 91-year-old Le Pen was one of the longest-standing members of European Parliament, acting as an MEP from the 1980s up until this year.

After the European Parliament lifted his immunity earlier this year, he was investigated over the improper spending of EU funds.

He was questioned for more than four hours on the specifics about the jobs of three of his aides, his lawyers said. Le Pen is "very tired of all this," lawyer Frederic Joachim said, condemning the case as "an incursion of the judiciary into the legislature."

While he was an MEP, Le Pen had used his parliamentary immunity to stop anti-corruption investigators from questioning him about the case in June of 2018.

Despite losing his immunity, he has refused to appear before judges.

Le Pen's estranged daughter Marine, who is head of the now-renamed National Rally, has already been charged in the same case.

Investigators suspect the National Front misused EU money — an estimated nearly €7 million ($7.7 million) — which was designated for parliamentary assistants in Brussels to pay staff for party work in France.