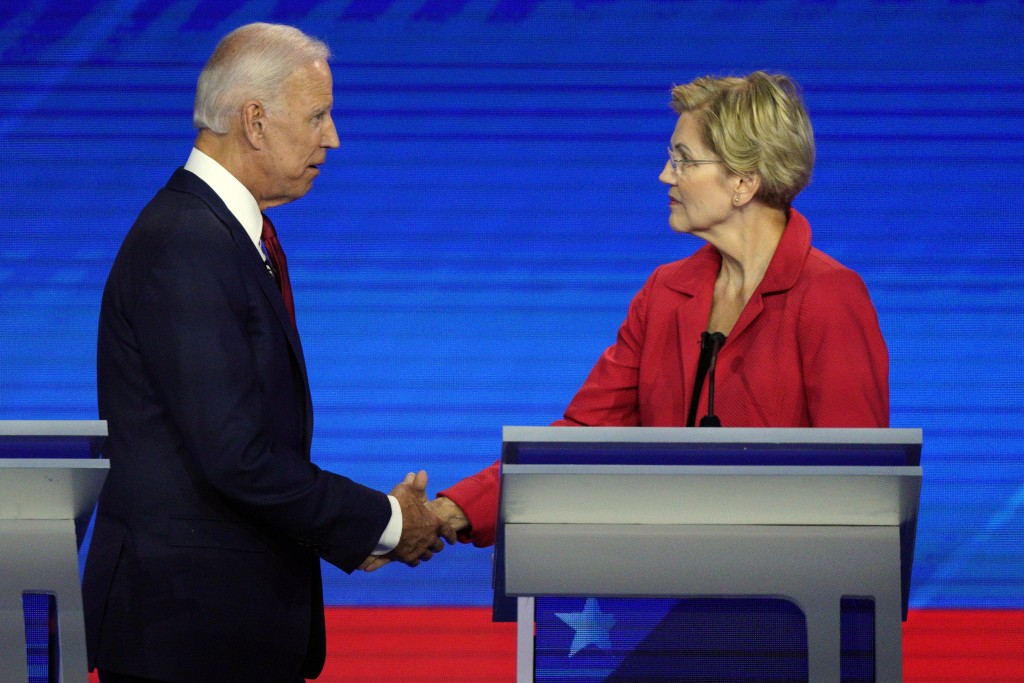 WASHINGTON (AP) — Joe Biden is the Democratic front-runner. And there were moments in Thursday night's debate where he looked the part.

Standing between a pair of liberal senators offering radical change, he unabashedly embraced his more moderate position on health care, forcefully pressuring Bernie Sanders and Elizabeth Warren to level with Americans about the steep cost of implementing a fully government-run system. He was more polished and practiced than in previous contests. And he repeatedly leaned on the legacy of former President Barack Obama, who remains the most popular Democrat in the nation.

"I'm for Barack — I think the Obamacare worked," he declared.

But the debate was punctuated by moments that highlighted why Biden can't shake questions about his consistency and whispers about his fitness for office, despite his lead in most national polls and early state surveys. Most glaringly: a meandering answer near the end of the debate about his past statements on racial inequality. Biden said poor parents should play the "record player" for their children before veering off into comments about Venezuela.

Biden's standing in the Democratic contest is the source of much debate within the party. Is he an experienced elder statesman who can calm an anxious nation and peel back some of the white working class voters who helped send President Donald Trump to the White House? Or is the 76-year-old past his prime and out of step with a party that is growing younger, more diverse and more liberal?

Thursday night's contest provided fresh fodder for each of those theories.

Biden was at his best in his lengthy exchange with Sanders and Warren over the future of health care in America. He confidently pressed them over the cost of their sweeping "Medicare for All" proposals, exposing Warren's unwillingness to say whether middle class Americans would see a tax increase under her plan (Sanders says they would, but argues the rise would be offset by lower health care costs).

In a retort to Sanders, who has said he expects employers would pass on health care savings to their workers, Biden exclaimed: "For a socialist you've got a lot more confidence in corporate America than I do."

Biden was the focus of fierce criticism from his rivals in both of the previous Democratic debates. But those attacks did little to diminish Biden's standing in atop polls, nor have a series of verbal flubs and misstatements throughout the summer.

The other reality: the candidates who have launched the sharpest attacks on Biden have gained little ground or already dropped out of the race. Sen. Kamala Harris, for example, bested Biden in the opening debate with a highly personal critique over his decades-old position on federally mandated school busing, but any boost for her candidacy was short-lived.

Perhaps mindful of that reality, most candidates sidestepped overt criticism of the vice president in Thursday's debate.

The one notable exception was Julian Castro, who served as Obama's housing secretary and is in need of a jolt to break out of the lower tier of candidates. In a highly charged moment, Castro challenged Biden's memory — a barely veiled reference to questions about the former vice president's age.

"Are you forgetting already what you just said two minutes ago?" Castro said during an exchange on health care.

In a post-debate interview, New Jersey Sen. Cory Booker laid into Biden as well, saying there were many people concerned about Biden's ability to carry the ball "across the end line without fumbling."

Castro and Booker were zeroing in on real questions that are being asked about Biden. Is he too old to serve as president? If he were the nominee, would he make a mistake at a critical moment that could clear the way for Trump?

Biden's stumbles later in the debate magnified those questions. He struggled through an answer about the war in Iraq and gave a grab-bag answer to a question about how to repair the legacy of slavery in America. He appeared to suggest that poorer families needed help learning how to raise their children.

Biden's supporters argue that ultimately, those answers — and the questions they raise — matter less to voters than their overall impressions of the former vice president. Indeed, there is a deep reservoir of goodwill for Biden in the Democratic Party, shaped in large part by the eight years he served as Obama's No. 2.

Which leaves little doubt as to why Biden spent much of the debate reminding Americans about those years, urging them to see him as the rightful heir to legacy of the last Democrat to occupy the Oval Office.

Editor's note: Washington bureau chief Julie Pace has covered the White House and politics for AP since 2007. Follow her at http://twitter.com/jpaceDC