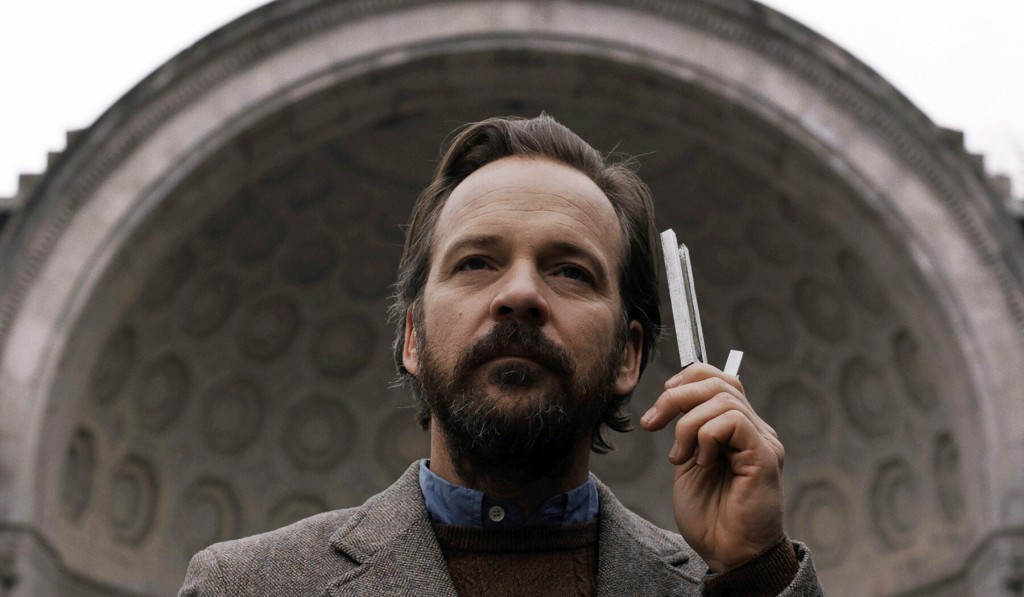 Market it right, and you can get people to pay for literally anything these days. Especially in Manhattan.

That's why it's not especially shocking when, at the start of the "The Sound of Silence," the lead characters of Peter and Ellen meet because she's hired him to tune her apartment.

Yes, we said tune her apartment, and no, she doesn't live inside a piano. Peter (an excellent, excruciatingly sensitive Peter Sarsgaard) is a "home tuner," able to detect the imperceptible frequencies coming from, say, your refrigerator or toaster — which in turn are affecting your mood and behavior. Ellen (a terrific Rashida Jones) is stressed and can't sleep, and friends have suggested that Peter, whose work has been written up in The New Yorker no less, can help.

So far, so good. We've all paid for things that sound much less sensible, and hey, The New Yorker!

The somewhat frustrating thing about "The Sound of Silence," a debut effort by director Michael Tyburski, who co-wrote the script with Ben Nabors, is not that we're asked to buy into this boldly quirky premise, but that we sometimes can't tell if the filmmakers themselves buy into it. There are moments in which the movie seems to veer decidedly toward self-knowing comedy but never quite gets there, and then turns so sad as to be tragic. The ambivalence becomes distracting, like so much white noise.

The lead performances, though, are compelling — both intelligent and vulnerable. In his lived-in tweed suit, Sarsgaard is moving as a dignified (and indignant) man utterly certain he's made a key breakthrough. If he's right, your aural environment — your neighborhood, your block, even your kitchen — determines how you feel and also the choices you make.

Peter traipses around the city with his tuning forks and his headphones, testing wind patterns in the park and making house calls. At Ellen's place, he lies on her bed to better recreate her morning routine, then gives the diagnosis: she needs to replace her toaster.

Peter certainly makes the lives of his clients better, helping them sleep or improving their love lives. But he craves hard-won recognition in the academic world, especially the honor of being published in the New American Journal of Sound. An old professor friend who pretends to support him (an entertainingly wry Austin Pendleton) proves a disappointing ally.

And the professor's assistant (Samuel Diaz), who offers logistical support, has his own self-advancing goals in mind. He suggests that Peter could monetize his knowledge. This isn't about commerce, Peter replies sharply.

Peter takes the same stance when offered an opportunity by a slick entrepreneur, the head of a company called Sensory Holdings, to make some money by selling an aurally pleasing atmosphere to clients. He doesn't want to sink that low.

Meanwhile, Ellen is getting more curious about Peter, finding his intensity somewhat seductive. For a while, we do too, especially when he explains that Bach and Beethoven, no less, used neurological techniques to impact their listeners that went unnoticed at the time.

But even Ellen has to draw the line somewhere, and she can't quite stomach the certainty with which he tells her that her apartment is emitting the musical note of C Minor, "a sign of resignation," and that unseen forces are governing her choices.

"It's getting late," she replies wearily, preferring to keep believing that she has some control over her life.

There's a devastating scene in which Peter encounters an academic idol (Tina Benko), a leading specialist in the field of sound, and asks if she has seen the work he sent her. Her withering response could send a dagger through the heart of anyone who's ever dreamed a dream or submitted an article or even handed in a term paper.

At this point, and a few others, we could use a little comic relief, perhaps just a hint of self-aware humor — even if just to add dimension to a film, originally developed from a short, that is just a bit too monochromatic (second dictionary definition: "of a single wavelength or frequency") to hold our interest for the long haul.

"The Sound of Silence," an IFC Films release, is unrated by the Motion Picture Association of America. Running time: 85 minutes. Two and a half stars out of four.