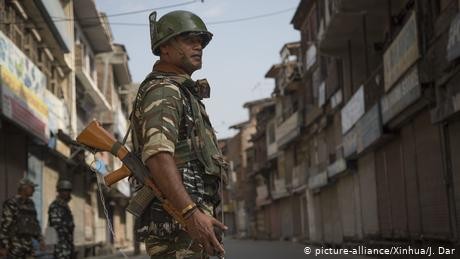 In early August, the government in New Delhi withdrew the northern state of Jammu and Kashmir's autonomous status, declaring it a union territory under India's jurisdiction.

The decision was followed by a security clampdown in the region, including curbs on internet and telephone services.

The move dealt a further blow to India's relations with Pakistan, which claims parts of Kashmir. In response, Pakistan decided to downgrade diplomatic ties and suspend trade with India.

In an interview with DW, Pakistan's ambassador to Germany, Jauhar Saleem, spoke about the importance of the Kashmir issue in Islamabad. He said Pakistan considers the Indian government's actions in Kashmir to be no less than a genocide.

DW: Genocide in Kashmir. Isn't that a little too extreme?

Jauhar Salim: The fact is that a tragedy is unfolding there as we speak. This is real state oppression and I look at international l media every day. There hasn't been a day since August 5 that I haven't seen a story — and a story which has saddened me and a lot of other people I'm sure. And by the way, I also look at the Indian media. Even in the Indian media media I see so many articles which are depicting the unfolding situation.

DW: But no one is referring to it as genocide, I'm just asking you if genocide is too extreme a description.

Even if you don't get into semantics, the fact is that there are three dimensions to the situation right now. First there's the human rights angle and there have been a lot of statements on that all over the world, such as from the Human Rights Commissioner Michelle Bachelet. Nobody can condone what is happening in Kashmir. There are the 8 million people who were locked down. There's also a curfew — and what is a curfew? Curfew means you go out of your home and you know you could be shot dead. Then there are no telephones no internet. Can you imagine that happening in Berlin or any other place in the world?

But the Indian government says that the situation is slowly being restored to normal. Are they lying?

That's not what I read in the Indian newspapers. Just a couple of days back, I was reading very strong commentaries in the Indian media, totally doubting the Indian [government's] statements. I am not even talking about the international media here. The second dimension [from earlier answer] is a political dimension. This is an international dispute; Jammu and Kashmir is a disputed territory between two countries. And this dispute has been going on for the last 70 years.

Not at all. In fact it's India that is trying to undermine the Simla agreement. I've read the agreement many times, and it clearly suggested that one is not allowed to change the status of all the territory that is under their occupation.

And they're doing just that. Simla says that the two sides would talk and try to resolve it, but India hasn't made a serious attempt at that.

There hasn't been meaningful dialogue. An international dispute, even if it has to be resolved between two parties, is still an international dispute. And the third dimension that I was talking about is the security dimension. South Asia is the most populous region in the world and these are two nuclear powers. And this type of dangerous situation between these two neighbors, these two nuclear neighbors, is very very dangerous. There could be a miscalculation, as was the case a few months back.

This cliche has been going on for years. These words don't mean anything anymore because, you see all those articles in the international media, and the Indian media as well. Are they all lying? These words now sound really hollow.

So Pakistan is not the epicenter of global terrorism, is what you're saying…

If Pakistan is doing such a fantastic job fighting terrorism why is the Financial Action Task Force (FATF) putting Pakistan on its watchlist?

And there are a number of other things. The US State Department, an ally, lists a number of terror organizations: Harkat-ul-Mujahideen, Jaish-e-Mohammed, Lashkar-e-Toiba, which are active in India and headquartered in Islamabad, Punjab and Lahore.

What we have done against such terrorist or militant organizations is recognized by the world. FATF is a watchdog. It has to do its job. Unfortunately, it was India at FATF that was co-chair and tried to politicize the matter. They were trying to use it as an opportunity to undermine Pakistan, which is very unfortunate.

So the FATF can be manipulated to suit any country's aims?

There was an attempt to manipulate it and we hope it will not be manipulated. There were many countries in recent [FATF] meetings, which actually checked India's attempt to politicize it. We are cooperating with the FATF. This is true for many developing countries, this is not just against Pakistan. This is a global organization with a global agenda.

Are we at a stage in which there is such a deadlock in ties between India and Pakistan? Is there no way forward?

It makes me laugh to see this. You know why? Because when they [India] accuse Pakistan of terrorism, they have to look at their sullied hands too. We've faced all the terrorism in Balochistan and in other parts of Pakistan. We've had Indian spies like Kulbhushan Jadhav, a serving naval officer, who was basically masterminding terrorist operations in Pakistan.

But the International Court of Justice (ICJ) asked Pakistan to retry Kulbhushan Jadhav because it found that Pakistan had not followed proper procedure.

The ICJ only asked Pakistan for consular access, which we have provided.

...and for retrying him. I have the judgment with me. I'm happy to read it out.

Even more importantly than that, Ajit Doval, the Indian National Security Adviser, is on record having made all those statements, like 'we have made Pakistan bleed through all these actions.' This so-called policy of offensive defense — what is that policy?

The policy is basically fomenting and helping supporting terrorism in Pakistan. People always talk about Bombay [Mumbai terror attacks in 2008]. But what about the Samjhauta Express, where are all those culprits, who were involved and in that particular terrorist act against Pakistanis in India? All of them were freed. So basically, the world has stopped listening to that.

Read more: Anger boiling over in Kashmir amid continuing lockdown

I think there's a lot of finger-pointing between India and Pakistan and we're both aware of that. What would you suggest is the way forward that is practicable and can be implemented by both countries, given the history and the way diplomacy has potentially not been working in the past few years?

That's a good point: what is the way forward? First of all, India has to withdraw all these actions that they've taken [security clampdown in Kashmir] because these actions have plunged the region into a very dangerous situation. That should be the starting point.

First of all, lift all the curfew, resume the communication links there. Our foreign minister is on record saying that after that, we will send our ambassador back to India. We will resume dialogue with India and then the two sides have to sit and speak seriously and in a meaningful way, with an open mind.

And I'm sure that you know there are no issues in the world which cannot be resolved by dialogue. Europe is such a big example. But then you have to be serious. You have to be meaningful. You have to be ready to give and take.

This interview was conducted by Biresh Banerjee for DW TV and has been edited for length and clarity.

DW also contacted the Indian ambassador to Germany,Mukta Dutta Tomar, for an interview. The request was declined.