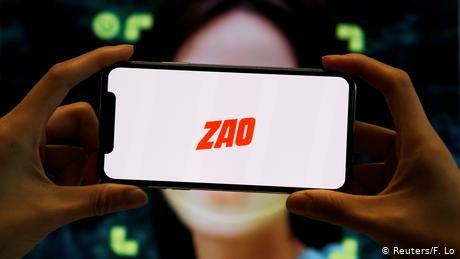 It's fascinating, but also a bit creepy. With China's new app Zao, you can become a film star in just a few seconds. Just take a selfie and see your face transformed into that of Leonardo DiCaprio's in the blockbuster "Titanic" almost instantaneously.

The app uses deepfake technology; the term is a composite of "deep learning" - artificial intelligence-based machine learning technologies -and "fake." Currently, the free advertising-funded app is only available in China, and last weekend it was the most frequently downloaded app in the country. Within hours, social media channels such as Weibo and WeChat were flooded with Zao videos.

Experts say that it's the best AI deepfake app on the market. But at the moment, it is still obvious that the faces are "fakes." They look like masks and since there are only a few film scenes in the app library, users can't just become anyone. Yet.

Professional studios have already created fake speeches by politicians to underline what technology will one day be capable of. The potential for abuse is alarming. Deepfake algorithms could eventually be used to manipulate elections, defame people or cause unrest by spreading fake news on a large scale. Facebook CEO Mark Zuckerberg has warned that deepfake videos take misinformation to a whole new level.

Even generally technology-friendly internet users in China are concerned. Journalists from various tech magazines who examined the Zao app's end-user agreement quickly pointed out how lax it was and how users no longer had the rights to their images. Since these observations were not censored they spread fast.

The developers of Zao, Momo, which is listed on the Nasdaq and owns one of the most popular dating apps alongside Tantan, had secured all the rights to the uploaded pictures. The fakes could even be sold to third parties, without the users being asked.

Within hours, the app store was filled with angry comments. One user said that the app should be removed from the internet before society was harmed.

Momo succumbed to public pressure even before the authorities interfered. Users who upload their doctored faces now have to consent before they are used further.

For a long time, the interest in new technologies in China has been greater than the concern about data protection. This is gradually changing. People seem less worried about mass surveillance than about their money. They are worried that the technology will help others access their smartphones.

China has the largest mobile market in the world, with 1.4 billion subscribers and over 800 million internet users. Many smartphone users already make payments using facial recognition. So of course many are very worried about identity theft and the potential of apps such as Zao to cause havoc.

It is not the first time that Chinese internet users have demonstrated angry concern. Last year, Robin Li who founded the Chinese search engine Baidu, sparked a furor in cyberspace when he said in an interview that the Chinese people were willing to give up data privacy for convenience.

Thousands rejected the claim, others said he was "shameless" and called on him not to speak in their name.

However, his point was not entirely unfounded.

The tide is changing. Many users are increasingly sick of the ubiquitous advertising and the personalized push notifications, which also tell third parties about users'' consumer behavior.

There have also been many cases of online fraud that the authorities are finding difficult to keep under control. Chinese internet users are increasingly angry and vocal about this. China's internet security law, which came into effect in 2017, has also come under fire. Companies and internet service providers are supposed to protect their users and delete contents that violate their rights; they are also supposed to gather evidence and if necessary hand it over to the authorities.

It is a mass surveillance system that functions well. The law has 79 articles – that's only 20 fewer than the European Data Protection Regulation – but it's very vague, especially regarding what information the state can access and how.

Pressure for more data protection will lead to the law being fine-tuned and companies are already adapting. China's leading third-party payment platform Alipay clearly stated that Zao could not dupe its facial recognition system so customers should not worry unnecessarily. While WeChat blocked videos that had been made with Zao with a warning.

The Chinese government wants to know what citizens are up to and is in cahoots with tech companies, allowing them to use data to develop artificial intelligence or e-commerce platforms. This is all part of the grand plan for China to be the global tech leader. A world power that does not have state-of-the-art technology is unimaginable in today's world.

But the data protection law is being expanded. AI apps will be forced to better protect user data. The state's role is not yet defined and whether it will limit access or hold companies that violate the law liable.

What is clear is that many in China continue to welcome new technologies with great enthusiasm. The government will always be interested in certain data but it also knows — as with climate change — that it cannot ignore data protection concerns.

When a large number of people say "enough is enough," Beijing has to listen - even if the government was not elected democratically.

Frank Sieren has lived in Beijing for over 25 years.