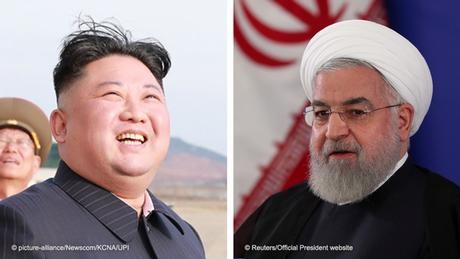 US President Donald Trump calls his administration's strategy for keeping nuclear weapons away from Iran and containing a nuclear North Korea "maximum pressure" - a tough-talking, sanction-heavy policy designed to force adversaries into compliance.

Trump's former National Security Adviser John Bolton was a primary architect of maximum pressure. After his ouster earlier this week, there have been reports that Bolton was fired for his ultra-hawkish stance on Iran and North Korea.

Whether maximum pressure will subside without Bolton remains to be seen. Even before the neo-conservative adviser joined Trump's foreign policy team, the administration's approach had been criticized as erratic and volatile.

After threatening to destroy North Korea in 2017 and holding two summits that ended without a substantial agreement, there is still little evidence that US policy is getting closer to pressuring the regime in Pyongyang to give up its nuclear arsenal. And North Korea continues to antagonize its neighbors, conducting at least eight missile tests since July.

With Iran, maximum pressure has meant tearing up an international nuclear deal, while pushing the regime in Tehran away from the international community.

In 2017, the world was on edge at the thought of nuclear "fire and fury" on the Korean Peninsula. Then the Trump administration adopted a more conciliatory tone. With Iran, Trump appears to be following a similar negotiating pattern of escalation followed by seeking compromise. But there are important strategic differences to consider.

An imperfect deal is better than no deal at all

North Korea already has nuclear weapons, but Iran does not. This is partly because an "Agreed Framework" between North Korea and the US fell apart in 2002 after both sides failed to meet their commitments. The failure of diplomacy in the wake of its collapse eventually allowed Pyongyang to test a nuclear weapon in 2006.

The 2015 nuclear deal with Iran, officially called the Joint Comprehensive Plan of Action (JCPOA), was far more thorough. Unlike North Korea, observers agree that Iran had been in full compliance with the JCPOA. Despite this, and against the protest of the deal's other signatories, Trump pulled the US out in May 2018, seeking a better agreement.

In August at the G7 meeting, Trump promised "tremendous progress" to both North Korea and Iran if they cut new deals with the US.

But North Korea is a different kind of negotiating partner than Iran. Pyongyang has always been a pariah state, having pursued nuclear weapons for decades as a bargaining chip to ensure its survival. Iran does not seek US-led international recognition and it does not need the nuclear deterrence and weapons-based legitimacy sought by Pyongyang. It has also never been clear whether Tehran was willing to pay the high price of international isolation in exchange for nuclear weapons.

'The enemy of good enough'

"Iran also has the knowledge and capability to build nuclear weapons but chose to stop short of doing so because it is fundamentally not in its interest," Daryl Kimball, executive director of the Arms Control Association in Washington, told DW.

This is why Iran agreed to freeze nuclear development in exchange for sanctions relief in 2015. The deal wasn't perfect; critics said it allowed the regime in Tehran access to billions of dollars. But non-proliferation experts agreed that it was effective in limiting Iran's development of weapons-grade nuclear fuel.

"The Trump administration chose the perfect to be the enemy of good enough, thus endangering the JCPOA - a plan that has prevented Iran from becoming another North Korea," said Ali Vaez, Iran director at the Crisis Group, a think tank in Washington.

Now Trump says he wants to negotiate a new deal with Iran - one that will include a permanent ban on all uranium enrichment, more intrusive inspections and a restriction on ballistic missiles. Tehran is not likely to agree to any of this and the Islamist regime would probably lose domestic credibility by seeking rapprochement with the US after Trump's confrontational tactics.

"Unlike North Korea, Iran has domestic politics. No Iranian politician can afford to negotiate under duress with a US president who continues to bully and insult the Iranian leadership," Vaez told DW. "Without a change in tone and tempering of the maximum pressure strategy, Iran is unlikely to meet the Trump administration at the negotiating table."

A report released this week by Bloomberg said that Trump had discussed the easing of sanctions on Iran in return for meeting with Iranian President Hassan Rouhani, an idea that was rejected by Bolton. Trump fired him soon thereafter.

If Trump seeks a Singapore-style summit with Iran, a diplomatic breakthrough, symbolic or otherwise, looks unrealistic as the US continues to strong-arm Tehran.

The nuclear deal was already a major diplomatic step forward, and the policy of sanctions relief was proving more effective than it had been with North Korea.

"North Korea wanted to build nuclear weapons, ostensibly to deter US aggression, and was able to evade sanctions imposed on its economy, which is far smaller and far less dependent on international trade than Iran," said Kimball.

Iranian society is more dynamic, international and open than North Korea. It has an oil economy and a middle class with a young population ready to join the international community. Tehran has more to lose. That was the logic behind the JCPOA, but this doesn't mean that the regime will lose face domestically under duress to accept a tougher deal.

"Not surprisingly, Trump's ill-conceived 'maximum pressure' campaign has done nothing to force changes in Iran's regional behavior or push Iran into accepting new US demands, rather it has sharply increased tensions in the Persian Gulf and decreased Iran's incentives to continue compliance, " said Kimball.

"Iran's decision to breach some of the JCPOA nuclear limits is not part of an effort to 'race' toward getting a bomb. Iran is not interested in pursuing nuclear weapons and is seeking to leverage stronger action by Europe, China and Russia to provide the sanctions relief that it was promised when it agreed to the deal."

"There is no evidence that Iran has had an active nuclear weapons program since 2003. But if the JCPOA collapses and Iran is attacked by the US or Israel, all bets will be off," said Vaez.

Bolton has called North Korea and Iran an "axis of evil." To keep his nightmare from becoming a reality, the US and its allies should return to an Iran policy that allows all sides to save face while ensuring that Islamic Republic does not become a nuclear-armed, internationally isolated pariah that is even more dangerous to the region than it is already.

"The key lesson: don't abandon an effective, detailed written agreement that blocks weapons-related nuclear activities of a proliferant state without a viable 'plan B,' especially when your allies continue to support the agreement," Kimball said.