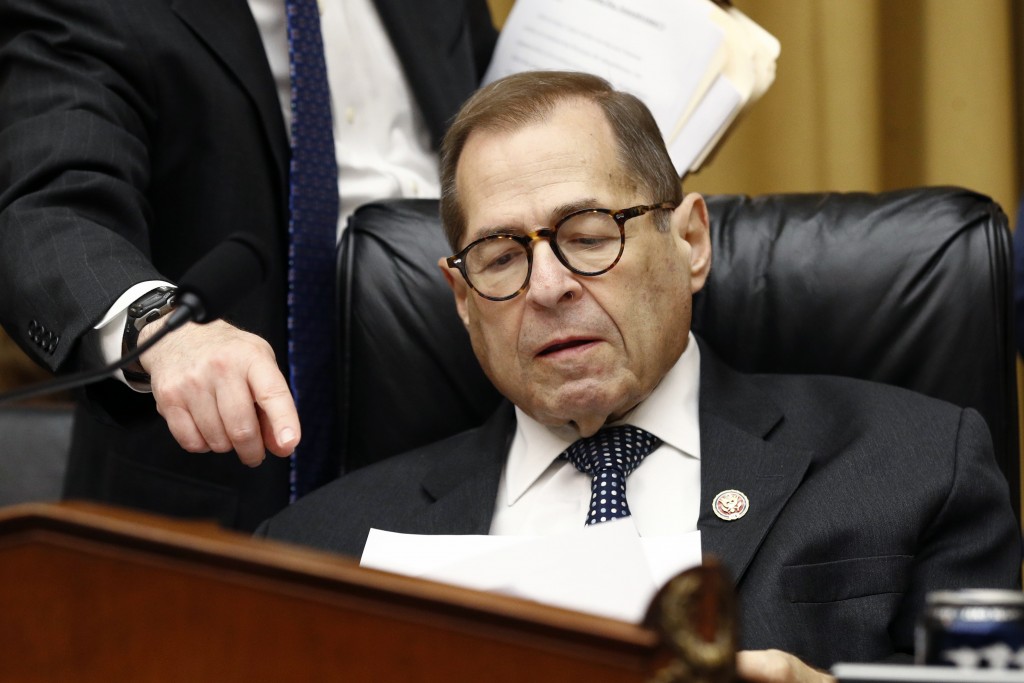 WASHINGTON (AP) — The House Judiciary Committee is preparing for its first impeachment-related vote, set to define procedures for upcoming hearings on President Donald Trump even as some moderates in the caucus are urging the panel to slow down.

The vote Thursday, while technical, is an escalation as the Judiciary panel has said it is examining whether to recommend articles of impeachment. It would allow the committee to designate certain hearings as impeachment hearings, empower staff to question witnesses, allow some evidence to remain private and permit the president's counsel to officially respond to testimony.

As the committee moves forward, some moderate House Democrats — mostly freshmen who handed their party the majority in the 2018 election — are concerned about the committee's drumbeat on impeachment and the attention that comes with that continued action. Several of the freshmen met with House Judiciary Committee Chairman Jerrold Nadler on Wednesday and expressed concerns about the path ahead.

"It's sucking the air out of all the good stuff that we're doing, so that's our concern," said Florida Rep. Donna Shalala, a freshman Democrat who attended the meeting. She said very few constituents in her swing district asked her about impeachment over the August recess.

Rep. Anthony Brindisi, a freshman Democrat from New York who was also at the meeting, said that the people in his district "are calling for action on prescription drug prices, health care, border security and infrastructure — not clamoring for impeachment probes and investigations. Congress should be focused on getting things done that can improve the lives of working people."

The vote signals that the Judiciary Committee, which is comprised of some of the caucus's most left-leaning members, is serious about moving forward with an impeachment process. But it's still very unclear whether that process will ever move beyond the panel's work, given that House Speaker Nancy Pelosi has urged caution. She has told her colleagues that the public still isn't supportive of taking those steps.

The committee would still have to introduce impeachment articles against Trump and win approval from the House to bring charges against the president. The Republican-led Senate is extremely unlikely to convict him and remove him from office.

Still, the committee has persistently advanced the impeachment issue — partly to bolster two lawsuits against the Trump administration as the White House has repeatedly blocked witness testimony and document production. The lawsuits say the material is needed so the panel can decide whether to recommend articles of impeachment.

Pelosi has said she wants to see what happens in court before making any decisions on impeachment. But she said Monday that she had signed off on the Judiciary vote, saying that "it's a logical thing for a committee to establish its rules of procedure."

The committee says the resolution is similar to procedural votes taken at the beginning of the impeachment investigations into Presidents Richard Nixon and Bill Clinton.

"The adoption of these additional procedures is the next step in that process and will help ensure our impeachment hearings are informative to Congress and the public, while providing the president with the ability to respond to evidence presented against him," Nadler, D-N.Y., said in a statement. "We will not allow Trump's continued obstruction to stop us from delivering the truth to the American people."

The resolution that the committee will consider would set parameters for the panel's impeachment hearings in an attempt to give lawmakers more powers to investigate the president. It would allow committee lawyers to question witnesses for an additional hour — 30 minutes for each side — beyond the five minutes allowed for committee lawmakers. Evidence would be allowed in private session to protect the confidentiality of sensitive materials, and any full committee or subcommittee hearing could be designated by Nadler as part of the committee's probe into whether to recommend articles of impeachment.

The first hearing under the new impeachment rules would be with Corey Lewandowski on Sept. 17. Lewandowski was frequently mentioned in special counsel Robert Mueller's report, which the committee has been investigating. According to Mueller's report, Trump asked Lewandowski to deliver a message to then-Attorney General Jeff Sessions asking him to limit Mueller's probe.