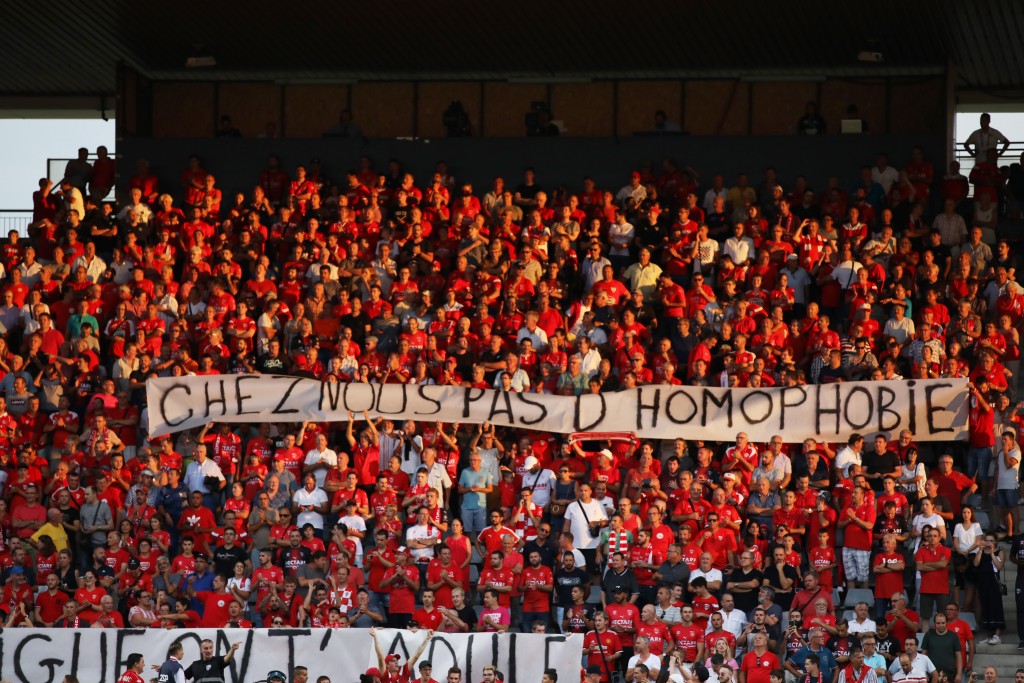 PARIS (AP) — The French league insisted Wednesday that referees still have the right to stop matches in case of homophobic chanting, despite the national federation president urging them not to halt play.

Referees were told by French soccer federation president Noël Le Graët on Tuesday to ignore a FIFA directive and no longer stop matches when there is homophobic chanting. In response, anti-discrimination groups urged Le Graët to resign.

Several league games in France's top two divisions have been halted by referees this season.

Representatives of anti-discrimination groups and French soccer fan groups met with the French league — or LFP — on Wednesday to discuss the matter ahead of the resumption of league matches this weekend.

"Our delegates have a working framework. If there are, and only if there are discriminatory chants, will they alert the referee, who will be finally the only one who will take the decision to interrupt the game or not," said Didier Quillot, the LFP's general director. "Homophobia is a plague and there is no place for it in the stadiums."

LFP president Nathalie Boy de la Tour said soccer fans are not discriminatory in general but that the language some supporters use has no place.

Pierre Barthélemy, lawyer for the National Supporters Association of soccer fans, said fans will work harder to improve the situation.

"Supporters are sensitive to all forms of discrimination," he said. "Supporters wish to participate and to contribute where they can to the fight for diversity, for equality and for respect."

Among the anti-discrimination groups attending was SOS Homophobia, whose co-president Jeremy Faledam welcomed the discussions.

"We are starting a dialogue," he said. "Sanctions are being taken — it allows us to start speaking about this subject. That's good."

The debate was sparked by Le Graët's comments in a radio interview on Tuesday.

"To say that football is homophobic, and could be the only symbol of homophobia in France, that's a bit strong. I don't accept it," Le Graët said. "We'll make sure there are no more banners (in stadiums); that's different. But stopping games, no."

"I know him well and I can assure you that he's someone who's always fought against all forms of discrimination in football," Deschamps said after France's 3-0 win against Andorra on Tuesday in European Championship qualifying. "We all hope there won't be any problems, but there are. It's up to the authorities, including the sports minister, to find the best solutions."

Sports minister Roxana Maracineanu met with Le Graët at Tuesday's match. In a statement Wednesday, the FFF said Le Graët has pledged his "full commitment" to fighting "all forms of discrimination."

Griezmann, who has featured on LGBT magazine Têtu's front cover and has said he would openly welcome gay players, told RTL radio that referees should stop games "whether it's for homophobic chant or racist chants," because eventually "people will stop doing it."

But Lloris, the France captain, thinks the opposite.

"As a player I'm against stopping matches. It's not the appropriate solution, whatever the form of discrimination," Lloris said. "You have to fight against it, of course, but stopping matches isn't necessarily the right solution. It's not going to stop a minority of imbeciles from doing what they do inside a stadium. There are other solutions and we have to support the LFP, they will make the right decisions."

The high-profile first division match between Nice and Marseille on Aug. 28 was halted for several minutes during the first half after Nice fans unfurled three banners with homophobic messages. There was also chanting against the LFP with an anti-gay slur oft used by French fans.