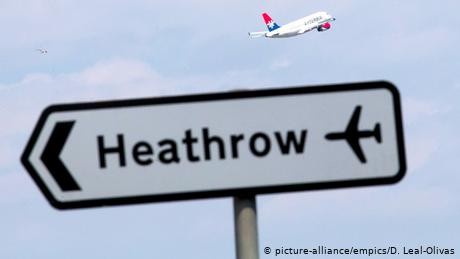 Activists from the Heathrow Pause group said they would still try to shut down London's main Heathrow Airport using drones on Friday, despite a series of preemptive raids by police.

The climate group aims to ground flights by flying drones close to the airport, seeking to pressure the UK government to reduce the country's CO2 emissions.

Police arrested three men and two women on Thursday on suspicion of conspiracy to commit public nuisance. Two of the group members were being interviewed by German newsmagazine Der Spiegel at the time of the arrest at a cafe in north London.

Despite the arrests, Heathrow Pause said it would go ahead with the action on Friday.

"The action will carry on exactly as planned, peacefully and non-violently, regardless of today's events, we have contingency measures in place," the group said in a statement immediately after the five were detained.

Under Heathrow's own rules, the airport must close if drones are spotted within a 5-kilometer (3-mile) exclusion zone around it.

Read more: Psychology behind climate inaction: How to beat the 'doom barrier'

Members of the group — an offshoot of the Extinction Rebellion activist movement — have said they do not plan to operate drones while aircraft are in the air, but instead are aiming for a symbolic action.

Earlier in the week, police said they were confident there would be no repeat of the chaos seen last December at Gatwick Airport, which also serves the UK capital. However, they also warned that any attempted disruption of the airport was a serious crime.

Extinction Rebellion shut down parts of London for more than a week in April in a series of actions that included the blockage of several major roads and businesses. At the time, the group said it planned to carry out an action to shut down Heathrow Airport.