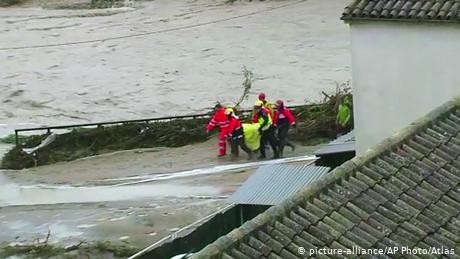 Spain was bracing for more severe weather on Friday after a day of flooding and high winds turned deadly.

A 61-year-old man and his 51-year-old sister died when their vehicle was swept away in the fast-moving floodwaters. The accident occurred in the municipality of Caudete, some 100 kilometers (60 miles) southwest of the city of Valencia.

Read more: Will it soon be too late to save the climate?

The local AVAMET weather service shared footage of cars being swept away.

It also showed torrents of water engulfing the nearby town of Ontinyent, after the Clariano River burst its banks in the heaviest rainfall since agency records began in 1917.

"We had 300 millimeters of rain. We haven't seen that for a century," Jorge Rodriguez, mayor of Ontinyent, told Spanish public broadcaster TVE.

The region of Alicante and the province of Albacete were also badly affected.

"Our thanks for their work and all our solidarity with the thousands of people affected by torrential rains," Sanchez tweeted.