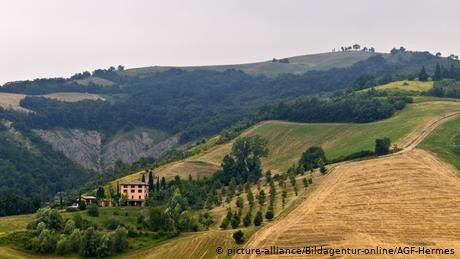 The "Lovers of Modena," two people buried centuries ago side by side with their hands intertwined, were both men, researchers have found.

The men were buried between the 4th and the 6th century AD near Modena in northern Italy, where their skeletons were discovered in 2009.

Researchers at the University of Bologna were able to use a new technique in which they extracted proteins from the dental enamel of both individuals to determine that the skeletons, always assumed to have been a female-male couple, were in fact two males.

The group of scientists published their findings on Wednesday in Scientific Reports, a journal of the Nature group.

The poor preservation of the remains made it previously impossible for scientists to perform any genetic analysis to establish the sex of the corpses.

"At present there are no other known burials of this type," Federico Lugli, one of the researchers at the University of Bologna, told Italy's Rai News.

"In the past, several graves were discovered with pairs of individuals lying hand-in-hand, but in all cases it was a man and a woman. What the connection was between the two individuals in the Modena burial remains a mystery for the moment."

Scientists have previously unearthed embracing couples. The "Lovers of Valdaro," a male-female couple, were discovered in Mantua, Italy, and other male-female couples have been found in Turkey, Greece and Siberia.

The researchers speculate in the study that the two men could have been fellow soldiers, friends, or relatives — possibly brothers or cousins, given the proximity of their ages.

Although the scientists cannot "exclude that these two individuals were actually in love," social attitudes and religious restrictions of the time period have lead researchers to reject any theory that this was a "deliberate manifestation of homosexual relationship."

The study's findings will have important implications for furthering an understanding of funerary practices of the time period in Italy, researchers.