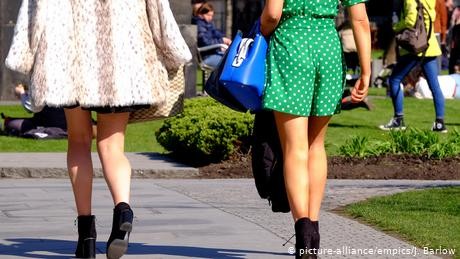 Germany's Justice Minister Christine Lambrecht plans to present a law that would make upskirting — the act of secretly taking images under a person's clothes without consent — a criminal offense, she said on Thursday.

"The term upskirting hides a disgusting intrusion into women's privacy ... And that's why I'm determined to tackle the issue and change the legal situation," said Lambrecht.

The practice of taking photos of a person under their skirt is currently categorized as a misdemeanor in Germany, unless the victim is verbally insulted or physically abused, in which case it is upgraded to a criminal offense. If the photos damage the reputation of the victim, the offender can be fined or imprisoned for up to two years.

This categorization does not make it clear to perpetrators that their "humiliating and degrading behavior" is unacceptable, Lambrecht told German broadcaster RND.

Read more: The war on upskirting in Germany

Lambrecht told Germany's lower house of parliament, the Bundestag, that her ministry would begin drafting a law.

The German states of Rhineland-Palatinate, Baden-Württemberg, Bavaria and North Rhine-Westphalia have already announced their plans to introduce similar laws that will go before the upper house, the Bundesrat, this month.

The drive to criminalize upskirting in Germany is spearheaded by Ida Marie Sassenberg and Hanna Seidel from the southern German city of Ludwigsburg. The two women launched an online petition in April of this year, which has accumulated over 90,000 signatures.

"The most disgusting thing about upskirting is that you might not even realize it has happened," Seidel told DW in August.

Through their activism, Sassenberg and Seidel are seeking to ensure offenders are punished more harshly. "We get lots of letters from different women who support what we are doing," Sassenberg said. "A lot of them say that after complaining of being upskirted, they are told to wear trousers or jeans instead of short skirts."

Earlier this summer, a man accused of upskirting over 500 women on public transport and in supermarkets was arrested in Madrid, Spain.

England and Wales, which outlawed the practice earlier this year, have implemented harsh punishments for offenders, who can be given up to two years in prison and must be registered as sexual offenders. Other countries which have banned upskirting include India, New Zealand, Australia and Finland.