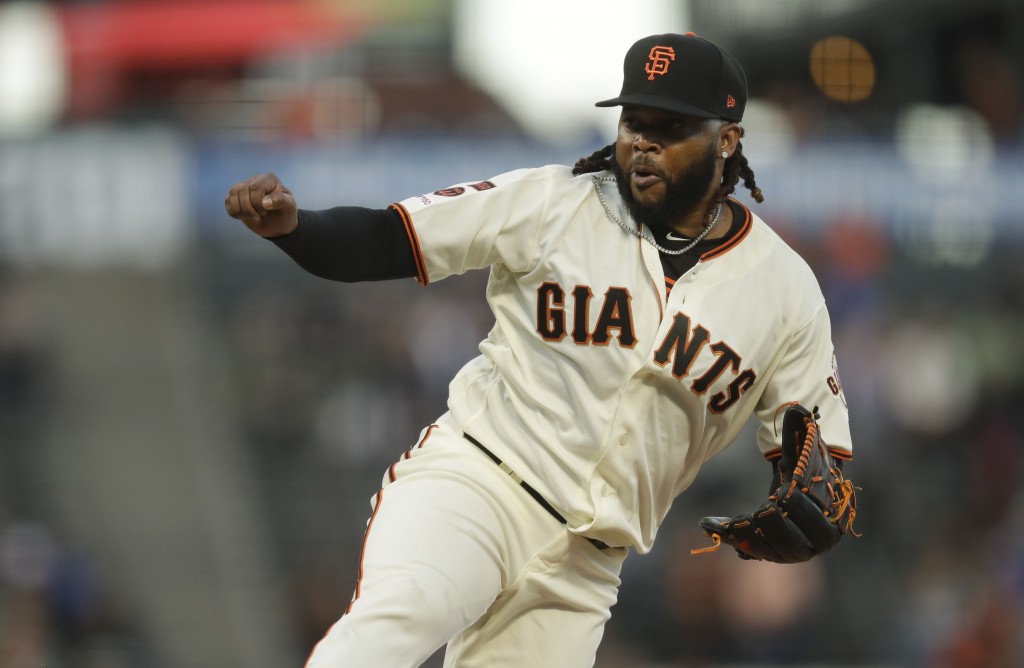 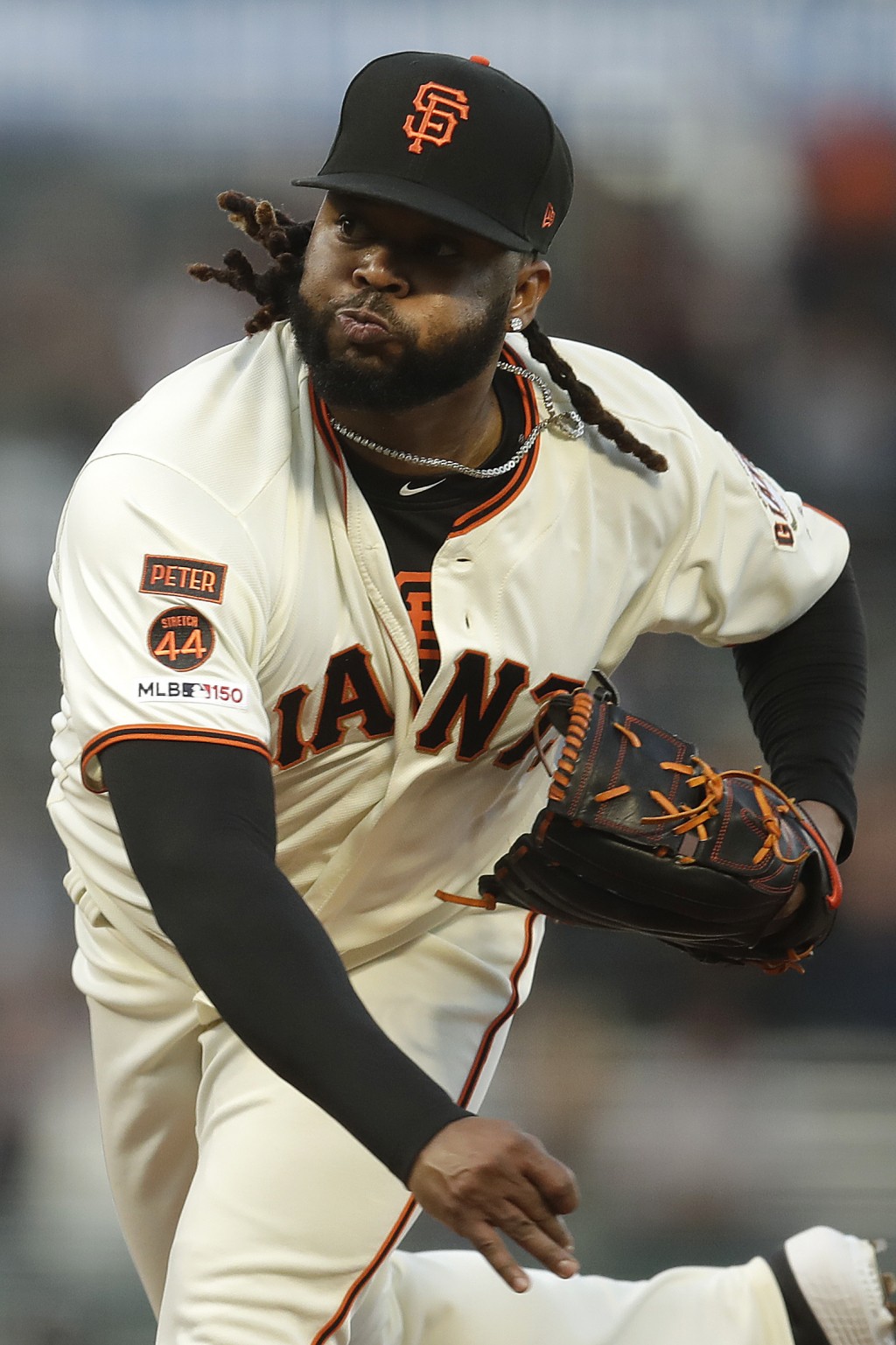 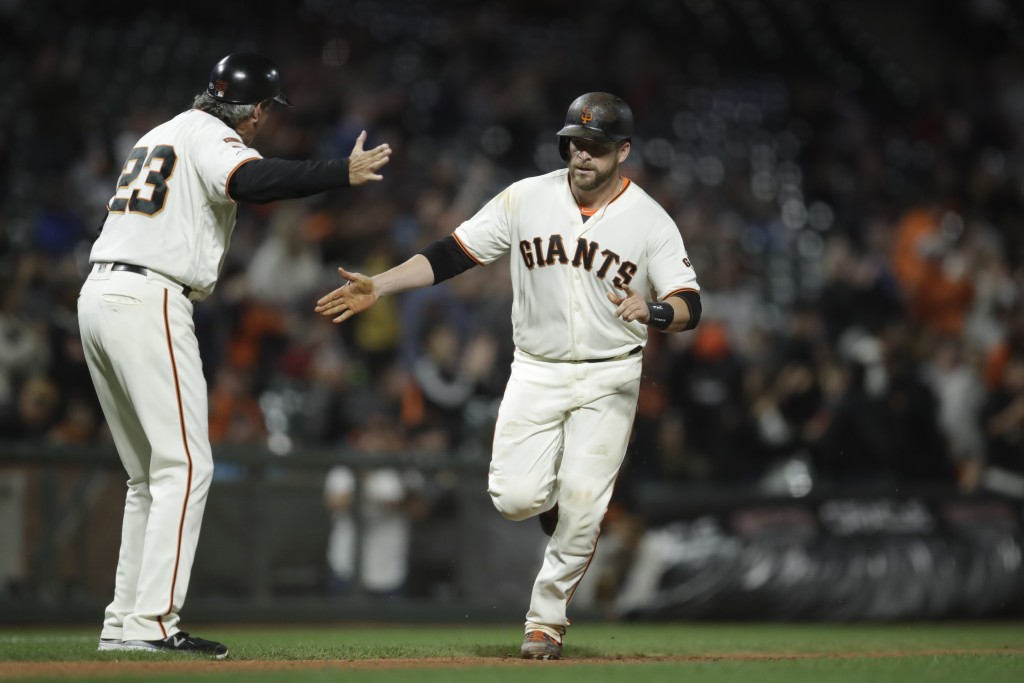 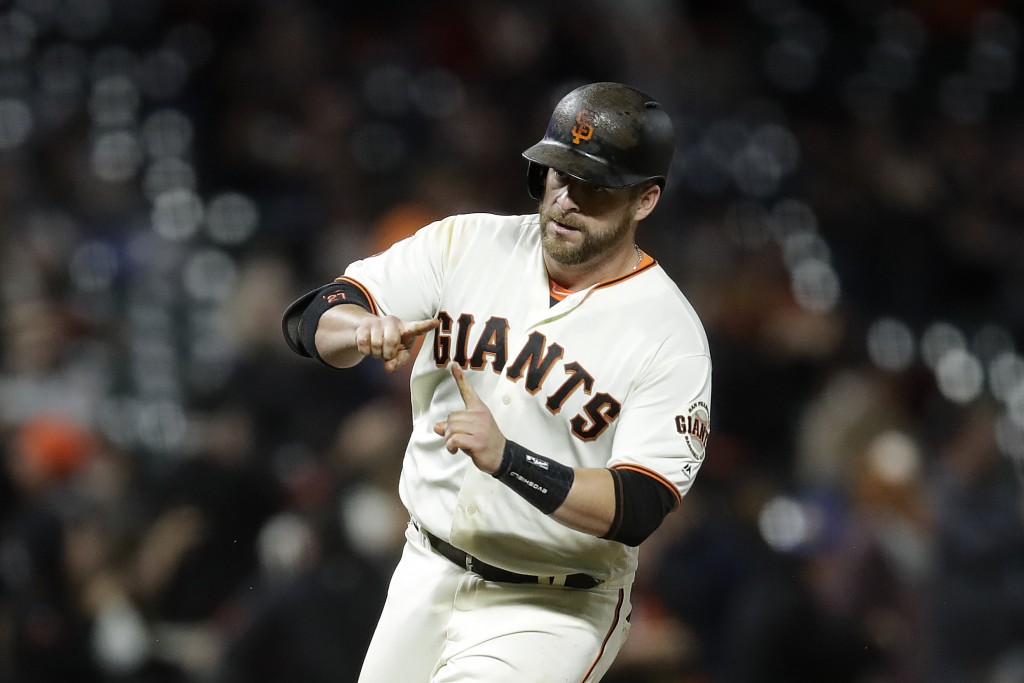 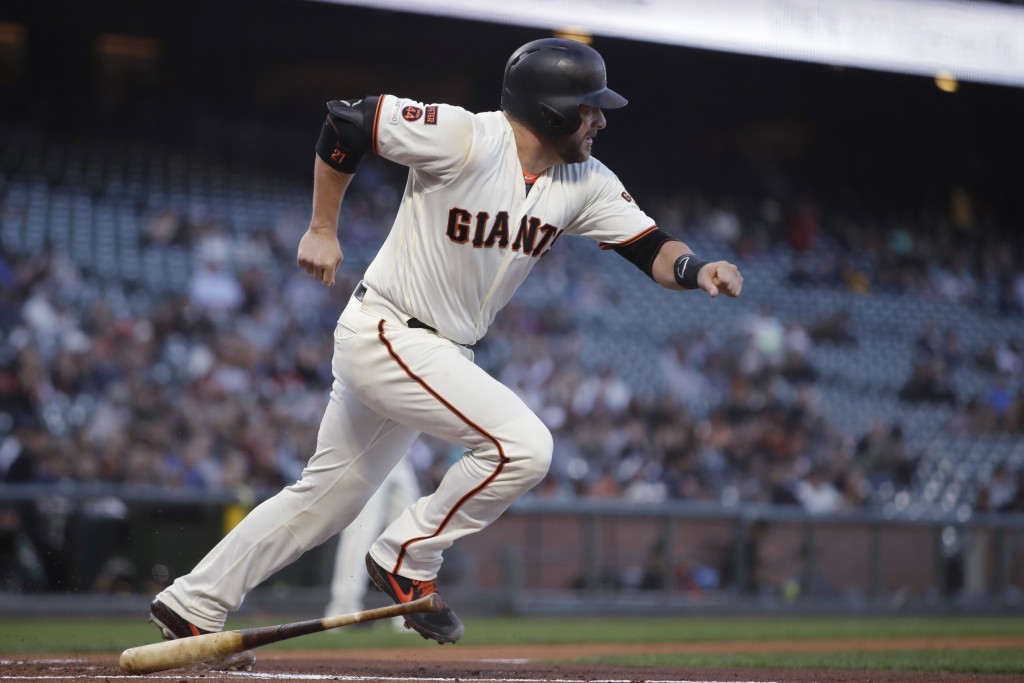 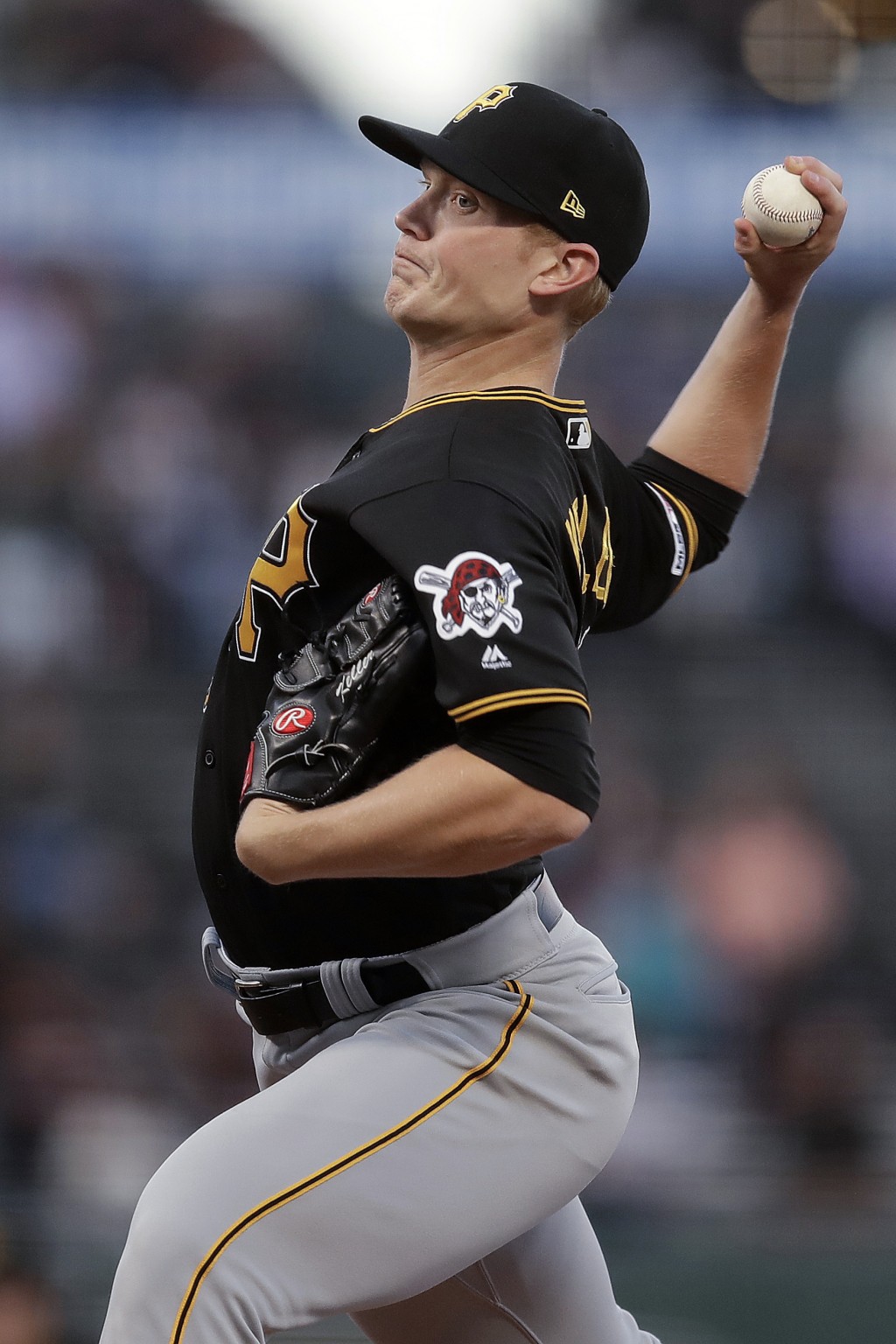 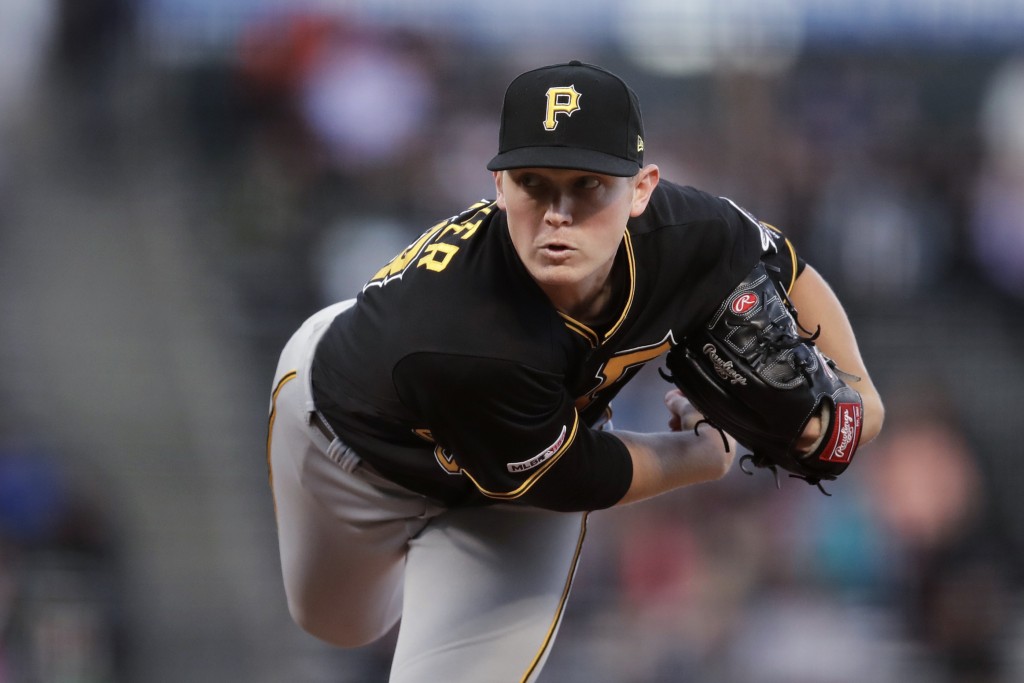 SAN FRANCISCO (AP) — Cap on backward and with confident head shakes and fist pumps, Johnny Cueto dazzled over five shutout innings in his long-awaited season debut to pitch the San Francisco Giants past the Pittsburgh Pirates 5-4 on Tuesday night.

The charismatic right-hander, far fitter and stronger than before he got hurt, returned to the mound for the first time in more than 13 months following Tommy John surgery. Cueto allowed one hit, struck out four and walked one. He had been scheduled to throw about 70 pitches and wound up at 69.

Stephen Vogt hit a two-run homer and drove in four runs. His two-run single in the first off rookie Mitch Keller (1-4) staked Cueto to a quick lead and Brandon Crawford added an RBI single as four of the first five batters got hits.

Keller had left his start last Tuesday against the Marlins after taking a line drive off the wrist on his pitching hand in the second inning.

Cueto went 1-2-3 in the first on 11 pitches with a strikeout and two groundouts before turning his cap around just for fun and pumping his fists.

He punched his hand into his glove in celebration, chomping his gum all the while.

Cueto, who pitched his first 7 1/2 seasons with Cincinnati, is 21-4 with a 2.13 ERA over 31 career regular-season starts against the Pirates. He has won nine straight decisions, not including playoffs, facing Pittsburgh since his last loss on May 30, 2012.

Cueto drew cheers from the small number of fans in the ballpark when he took the field to warm up some 30 minutes before first pitch, then received a rousing ovation during pregame introductions.

The 33-year-old Cueto pitched in the big leagues for the first time since July 28 last year. He came back in better shape than before thanks in large part to a healthier diet that included fish and salads.

Cueto won 18 games for San Francisco in 2016 and started the All-Star game that year while dealing with the discomfort he referred to as stabbing pain in the pitching elbow for three years .

Shaun Anderson earned his first save as the Giants won at home for only the sixth time in their last 18 games.

Plate umpire Paul Emmel was replaced in the top of the sixth by second base umpire Mike Estabrook. Emmel took a pitch from Keller off his right hand.

Cueto is in the fourth season of a $130 million, six-year contract he signed before the 2016 season.

"It's easy when you're in a situation like Johnny's, you can be comfortable. You're set for life but he wants to get back and compete, and compete at the highest level. He's taken such great care of himself and worked hard to get to this point," manager Bruce Bochy said. "... Players appreciate other players' talent, the gifts and talents that they bring, and Johnny with how good he is but also he's got an entertaining aspect to his game. That's who he is. He likes to entertain but he's got great focus, too. What's incredible with all the twists and turns and the quick pitching is remarkable control. That's where his focus is and the other part has become second nature to him. That's what you appreciate when you watch him, he's an artist."

Pirates: RHP Kyle Crick required season-ending surgery on the index finger of his pitching hand resulting from an injury sustained in a clubhouse altercation with fellow reliever Felipe Vázquez before Monday's game, and the Pirates held a team meeting Tuesday. Both players were fined an undisclosed amount. Crick underwent a procedure Tuesday to repair the extensor tendon, performed by Dr. Scott Hanson in San Francisco. The club expects him to be ready for games come spring training. "The behavior exhibited by these two players last night is unacceptable, inconsistent with the standards expected of a major league player and will not be tolerated by the organization," general manager Neal Huntington said. No other details of what happened were provided. ... CF Starling Marte was out of the lineup for a second straight game nursing a tender left wrist that he sprained catching a flyball Sunday against St. Louis. Manager Clint Hurdle said he could be available to pinch-run but of batting said, "We're going to work on the hitting part of it."

Giants: Closer Will Smith is dealing with back inflammation and it's unclear when he will pitch again. "We're trying to get him back to where he's comfortable throwing off the mound. He's not quite there yet," Bochy said. ... OF Alex Dickerson missed his seventh straight game with a right oblique injury but the hope is he will return this weekend against Miami. He was scheduled to do more hitting off a tee. "If he can take a swing without making a grimace I'll put him in there," Bochy said. ... LHP Williams Jerez designated for assignment as the Giants cleared 40-man roster room for Cueto's return.