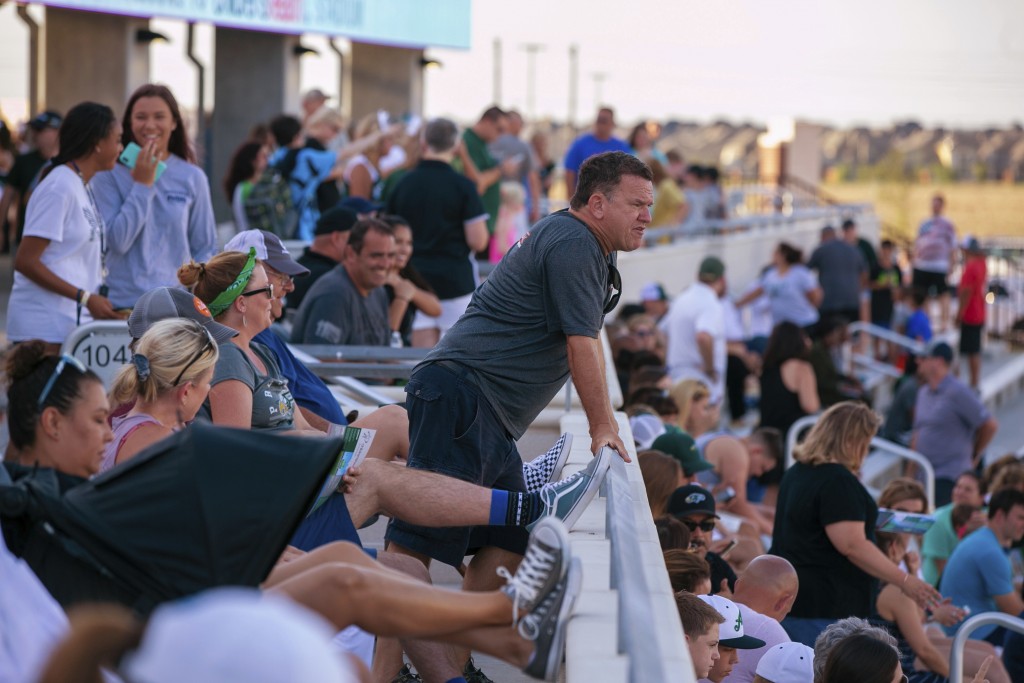 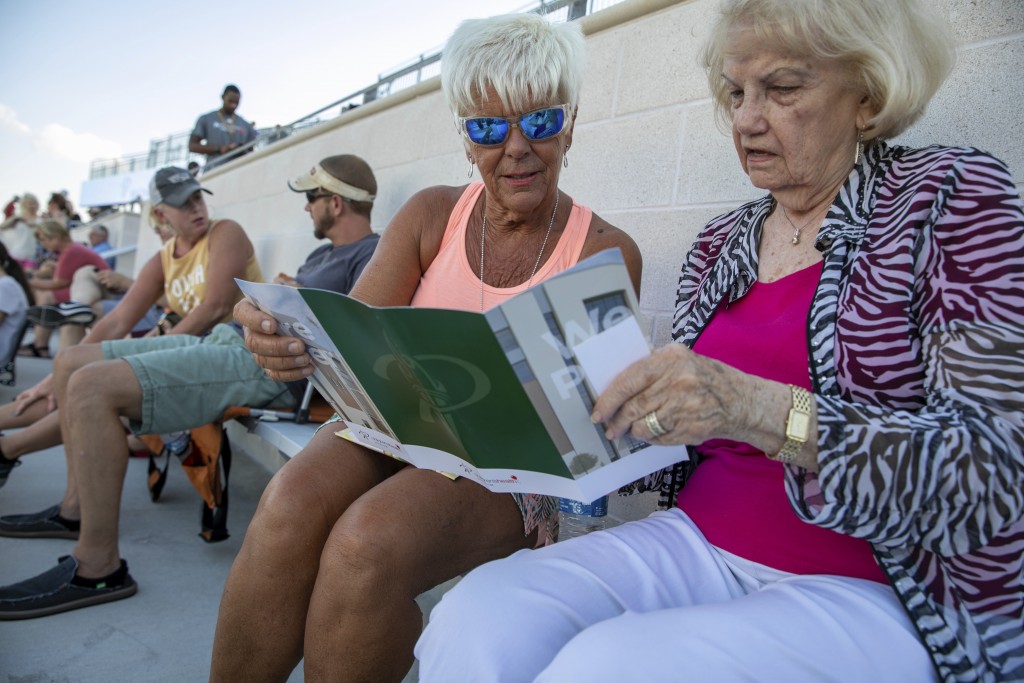 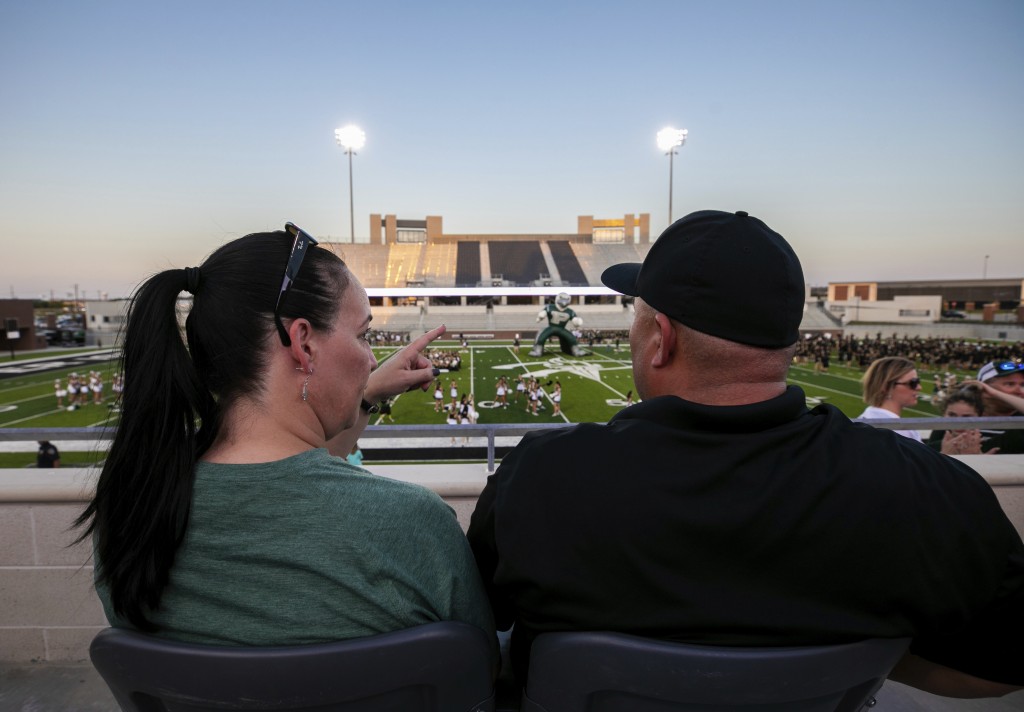 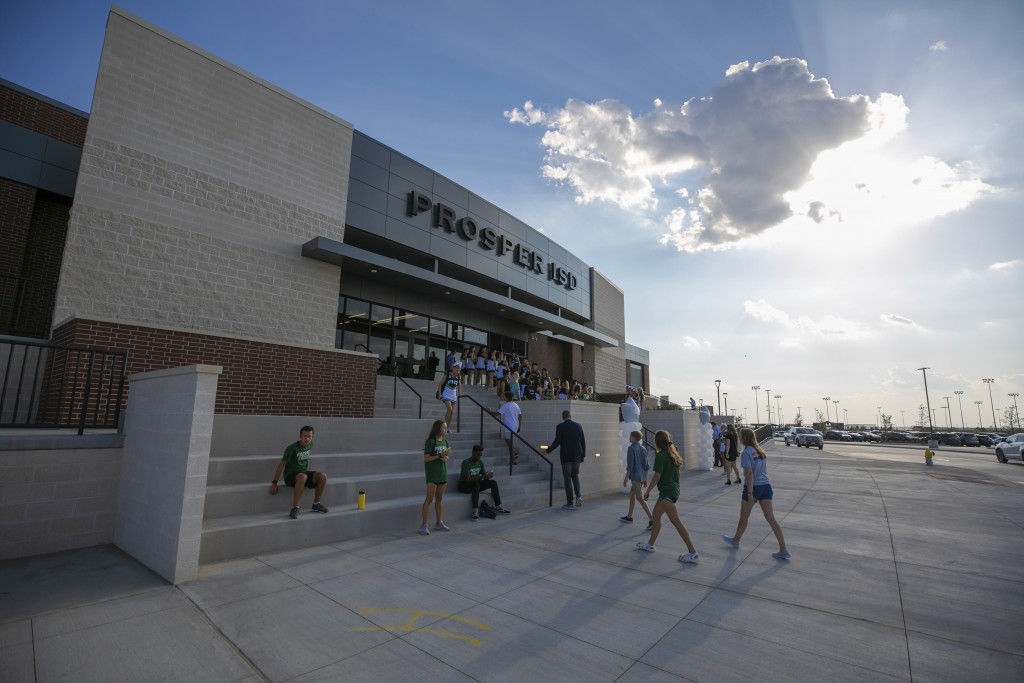 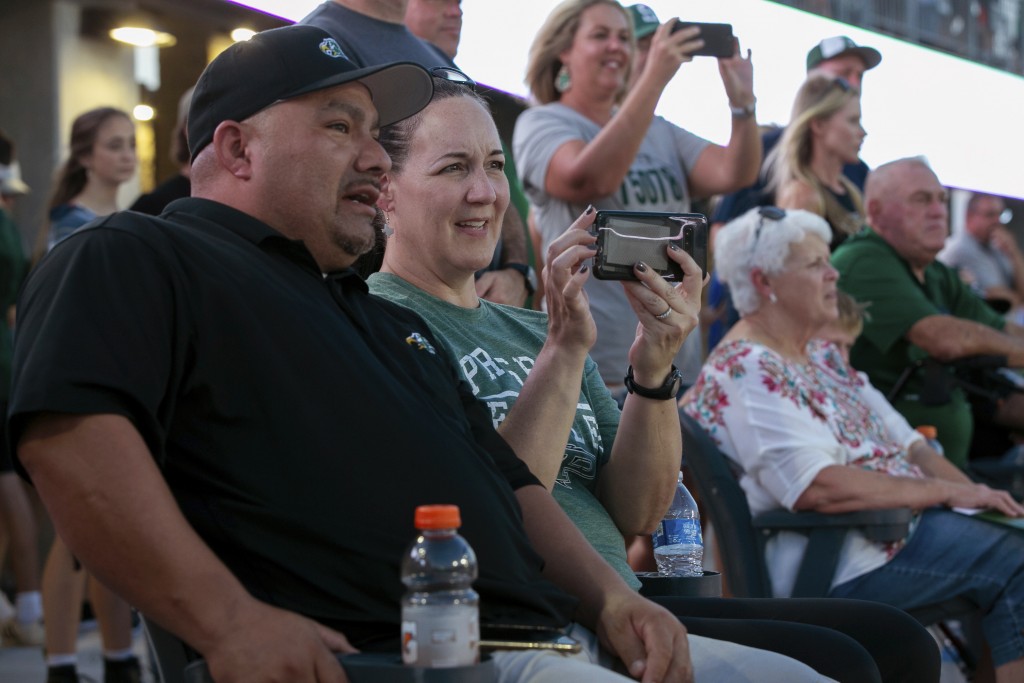 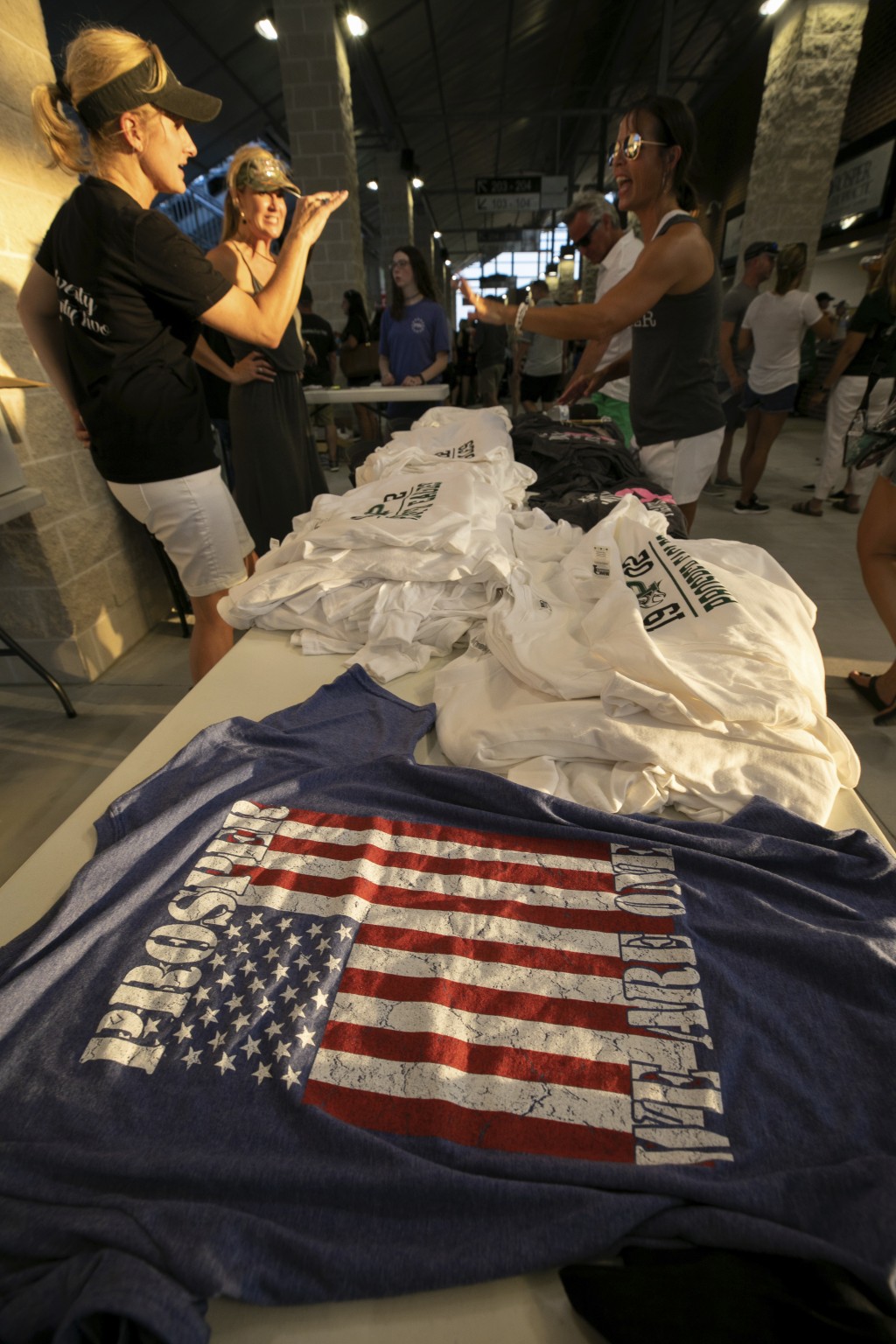 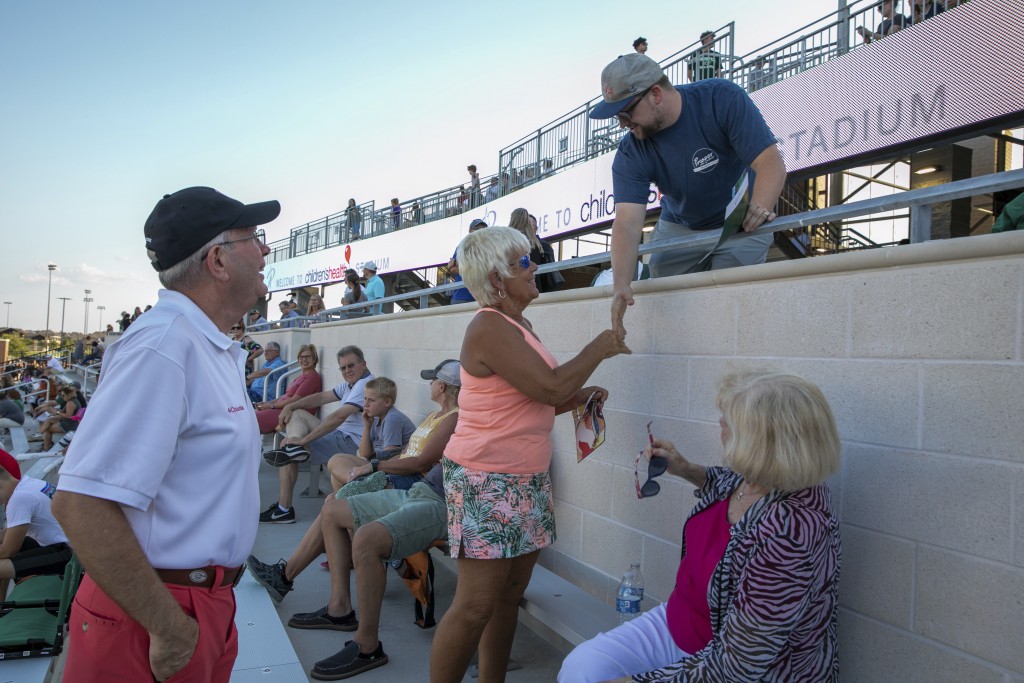 PROSPER, Texas (AP) — Thirty new students are from Arizona, and nearly 100 moved from California. But the small town of Prosper, Texas, is expecting more growth — a lot more — so it built a $53 million high school football stadium outside Dallas, just two years after finally getting a Walmart.

The scoreboard is 63 feet tall, the biggest at any Texas high school, and on a Saturday night it blared Aerosmith's "Dream On" as band mom Lisa DeMarco settled into one of the 12,000 seats. She's heard "a few liberals" have moved in, but doesn't know any.

"It's a red state. I love the Second Amendment part of it, and I don't like the fact there's a lot of people talking blue," said DeMarco, herself a newcomer from Georgia.

By holding Thursday's presidential debate in Houston, Democrats are out to show the rest of the country they can finally win again in Texas, propelled by fast-changing suburbs like Prosper that are beginning to trend more liberal after decades of Republican dominance. But for Democrats, the transformation may not come by 2020.

For years in Texas, Democrats have counted on shifting demographics, especially a soaring Hispanic population and more left-leaning voters moving in from other states, to turn the state blue. But even after big gains in 2018 — including flipping two congressional districts — conservative bastions like Collin County reflect the difficult task still ahead.

Although Democrats might finally break GOP control of the statehouse and are encouraged that five Republican congressmen are retiring, Texas is still seen as President Donald Trump's to lose. The suburbs around Prosper's hulking new stadium — which, in true Texas fashion, even has a naming rights deal — are a key asset, as least for now.

Thousands of new high-paying jobs and transplants with college degrees to Dallas' wealthy north suburbs haven't changed overnight the politics of Collin County, which surpassed 1 million in population last year while adding the fourth-most new residents of any county in the U.S.

Republican Sen. Ted Cruz still carried the county by 6 points in 2018 even as other suburbs flipped. The GOP easily held onto the county's main congressional district and again swept the statehouse seats, although some were close calls.

Local Democrat Mike Rawlins said some races here might've been closer had the state party not written them off as lost causes. "They viewed this as being a Republican county for so long, so why bother?" said Rawlins, who heads up the Collin County Democratic Party.

Now it's seen as a bellwether, along with sprawling Tarrant County around Fort Worth, which went blue last cycle.

"Suburban Dallas will probably be the most intensely looked at and scrutinized to see where we really are with voters," said Stacy Hock, a Republican donor and chairwoman for the Texas GOP's 2020 strategy campaign.

Talk of Texas turning blue isn't new. In 2014, veterans of President Barack Obama's campaign swooped in to launch Battleground Texas to great fanfare, only to see Democrats at the top of the ticket get pummeled.

But this time, Democrats have the 40 House seats they picked up in the 2018 midterm to show they're gaining ground. Especially competitive are the suburbs becoming less white or with well-educated women put off by Trump.

This week, Texas Democrats announced plans to send out 1.5 million vote-by-mail applications in 2020, and they expect to have more than 1,000 field organizers.

For Republicans, losing the largest state in their bloc, with 38 electoral votes, would all but sever the path to the White House. Texas hasn't gone for a Democrat in a presidential election since Jimmy Carter, and a Democrat hasn't won a statewide office in Texas since 1994.

The GOP still has a significant buffer: Trump won Texas by 9 points in 2016. Republicans also hold nearly two-thirds of the state's congressional delegation. Democrats would have to win every district where they came within 5 points last year to close the gap.

Support for Trump isn't hard to find in affluent Collin County and in Prosper, about 40 miles north of Dallas. The president's best ally remains an economy that has supercharged the county's growth. Toyota moved the automaker's U.S. headquarters and 4,000 jobs here in 2017. State Farm filled a sleek new 2-million-square foot campus with 7,000 employees.

Fiscal conservativism and support for business keep people here voting Republican, said Harry LaRosiliere, mayor of Plano, the county's largest city. He's not a fan of Trump but called it a stretch that the president would lose the county.

"Last year was the first year I got a tax refund," he said. "As much as I didn't like what he's saying in office, it was nice getting a refund."

In 2016 Trump won Collin County, which is nearly 56 percent non-Hispanic white, by nearly 60,000 votes. Cruz followed suit last year, but only by a third of that margin with a similar turnout.

Republicans are warning Trump to take Texas seriously in 2020, and GOP volunteers in Collin County are hitting the ground earlier than they have in decades.

"If Republicans perform as poorly in the suburbs as we did in 2018, it's going to be another disastrous cycle," Republican strategist Matt Mackowiak said. "We all realize that."

In Prosper, where the population has tripled to 25,000 over the last decade, one in every five new students in the city's school district last year came from out of state. Kelly Geissler, who moved from Wisconsin four years ago, said she doesn't want to see Texas change.

"The business is here, the work is here, the schools are growing so that creates jobs. People want a better way of life so they come here," she said. "Why would you want to make it like where it was not so good?"