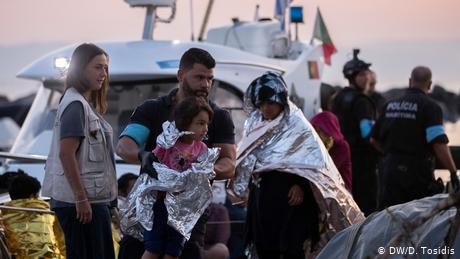 Germany's Interior Ministry on Thursday called for Greece to step-up deportations to Turkey, as well as for stronger efforts to stem the flow of illegal crossings to Greek islands in the first place.

Stephan Mayer, the parliamentary secretary in the Interior Ministry, said, "We urgently need to make progress in small repatriations to Turkey, to improve the deteriorating conditions at certain hot spots on the islands."

Speaking with the Funke Mediengruppe news publisher, Mayer described the situation on the Greek destinations closest to Turkey as "very difficult."

More and more migrants have been crossing to Greece in recent weeks, overwhelming the already strapped local services.

Greece's new conservative Prime Minister Kyriakos Mitsotakis had earlier praised deportation efforts, saying they were improving, however, the EU Commission has said there was still much more work to be done.

Mayer insisted that there be a more "comprehensive implementation" of a 2016 EU-Turkey migration pact meant to keep migrants from taking the often perilous journey to Greece. At least 1,163 people died during the crossing between March 2015 and March 2016.

The pact, meant to curtail human trafficking and prevent deaths in the Aegean Sea, included billions of euros in aid to Ankara and the agreement that refugees be immediately returned to Turkey.

Since that deal was struck, only 1,904 people have been deported to Turkey, while 24,348 Syrians who arrived in Europe via Turkey have been settled in EU countries.

The government has said Merkel spoke to Turkish President Recep Tayyip Erdogan about the situation over the phone on Wednesday, following a threat from Erdogan on Saturday that he would reopen the borders to Europe for Syrian refugees.