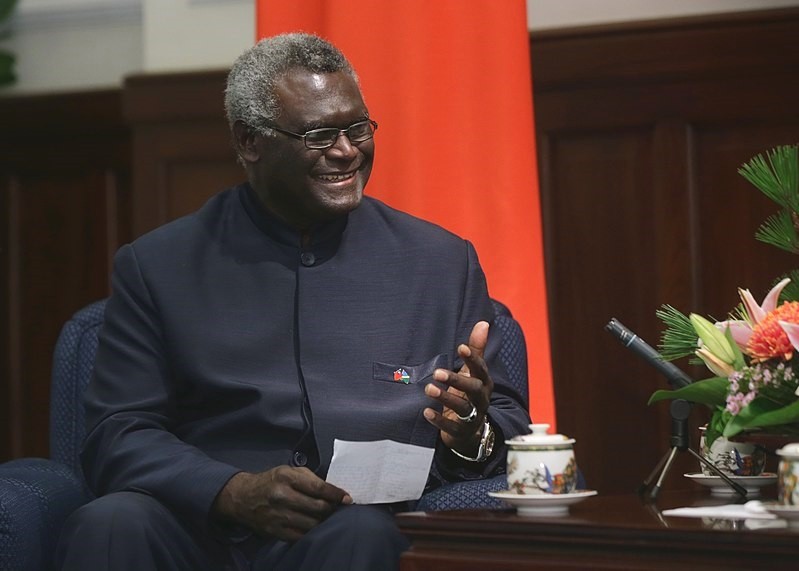 TAIPEI (Taiwan News) -- In the strongest signal yet that the Solomon Islands is getting set to switch diplomatic ties from Taiwan to China, Prime Minister Manasseh Sogavare said that Taiwan "is completely useless to us."

During an interview recorded in July on "The Little Red Podcast" with Graeme Smith," a fellow at the Department of Pacific Affairs at the Australian National University, Sogavare strongly hinted that the South Pacific island nation is preparing to cut ties with Taiwan in favor of communist China. Although Sogavare has been a champion of ties with Taiwan over the years, he signaled that his patience is wearing thin when he said, "To be honest, when it comes to economics and politics, Taiwan is completely useless to us."

Sogavare then made reference to the Australia-led Regional Assistance Mission to Solomon Islands (RAMSI) in 2006, when riots were taking place in the country against Chinese-owned property after allegations emerged that Chinese businessmen had paid for the rigging of the general election. Sogavare recalled an incident in which he dispatched police officers to undergo training by Taiwan, only to be confronted by Australia:

"I sent 40 police officers to go and train in Taiwan in 2006. That's when RAMSI was already in this country. And you know what Australia did? The foreign affairs minister himself went to Taiwan and says: "Stop the training; that area is ours.'"

Sogavare asserts that if China had been their diplomatic ally at the time, it would have ignored pressure from Australia and continued with the training. "If this was China … they wouldn't give a damn to Alexander Downer if he goes there and says: ‘You stop -- get out of here,'" said Sogavare.

He then implied that China, notorious for its debt-trap diplomacy, would somehow better promote the Solomons' interests as a sovereign nation. "They'd say 'Get the hell out of here.' This is a sovereign decision by a sovereign government," said the prime minister.

The Solomon Islands leader then claimed that an advantage of throwing his lot in with China would be entering into military arrangements and "[getting] China to help us establish a military force." He said the same would not be true with Taiwan: "In terms of economics and geopolitics, we cannot flex our muscles. So they are completely useless to us in that sense."

When asked what the advantages were of switching diplomatic recognition to China, Sogavare said that Fiji, a diplomatic ally of the communist regime, "can flex their muscles" and say "You behave yourself. I have another friend here." He said there is also a perception that China is "doing great in other countries" in the region, such as building roads in Papua New Guinea and Vanuatu.

Sogavare claimed that the Solomon Islands is actually a net lender to Taiwan because although it receives US$100 million (about NT$3 billion) in aid from the country each year, Taiwanese fishermen process $2 billion worth of tuna caught in the Solomons' waters in Thai canneries. He indicated that he would like to see more Taiwanese investment in job-building projects, such as building tuna processing plants in his country.

As for the risks of falling under China's sphere of influence, Sogavare said that he heard there were many problems with Chinese encroaching on land in Tonga. He also touched on the issue of China's notorious debt-trap diplomacy as being a source of concern.

The prime minister said that it was interesting that ordinary Solomon Islanders are writing in the newspapers "Oh no, no, no, no. Let’s not go down that path." However, he indicated that even they could be swayed, saying "It will be very interesting when you start to [tell] them 'Well, this is what we will get if we switch.'"