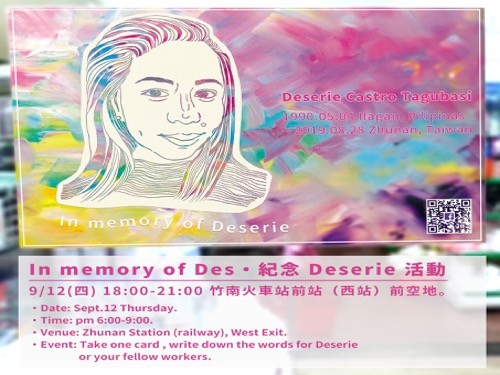 TAIPEI (Taiwan News) -- A memorial for Deserie Castro Tagubasi, a Filipina factory worker who died from an acid spill at an electronics factory in western Taiwan, will be held this evening (Sept. 12) in Miaoli County.

The 29-year-old migrant worker was wearing protective clothing to clean circuit boards with hydrofluoric acid in an electronics plant run by Tyntek Corporation (鼎元光電) in Miaoli's Zhunan Science Park on Aug. 28. However, as she turned around, she accidentally knocked over the container and the substance spattered the back of her legs, which the clothing did not cover.

She suffered chemical burns over a large surface of her legs, and while colleagues tried to help her, she still died after her transfer to hospital, reports said. As few hospitals are equipped to deal with burns from hydrofluoric acid, the woman had to be transferred by ambulance from the factory in Miaoli to the Veterans’ General Hospital in Taipei, where she succumbed to her wounds that same day.

The memorial, called "In memory of Des," is meant to be both a remembrance of Tagubasi and an opportunity to establish ties between migrant workers and local Taiwanese in Miaoli, organizers said to CNA. Memorial attendees will be given cards on which they can write their condolences and include words of support for migrant workers.

Sha Yen-hsi (沙彥羲), manager of Iasangart art workshop, told CNA "After the event, the cards in memory of Tagubasi will be given to her family, while those with messages for other migrant workers will be pinned on the walls of shops in the area." Sha expressed the hope that this effort will help raise awareness of migrant workers in the local Taiwanese community and ideally "open the doors to friendship."

The memorial will be held on the west side of Miaoli's Zhunan Station from 6 p.m. to 9 p.m. this evening. 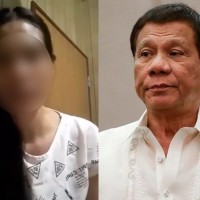