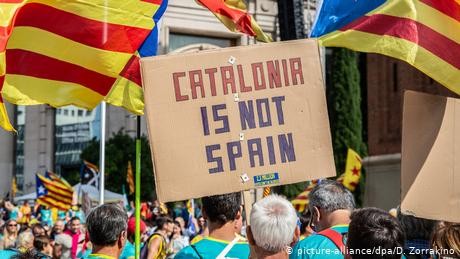 Thousands of Spaniards gathered Wednesday for Catalonia's annual September 11 rally marking the fall of Barcelona to Spanish forces in 1714.

Organizers said they expected some 450,000 people to take to the streets in support of further attempts to break away from Spain.

The rally comes as 12 Catalan separatist leaders await a Spanish Supreme Court verdict on charges of rebellion, sedition, and misappropriation of public funds linked to an illegal 2017 independence referendum and unilateral declaration of independence that cast Spain into political turmoil.

Waiting on the verdict

The October ruling is expected to be a lightning rod for the movement and determine the path forward for Catalan nationalists.

Oriol Junqueras, the jailed leader of the Republican Left of Catalonia (ERC) party said the state "intended to behead a peaceful movement with this sentence."

Junqueras, who faces 25 years in jail if convicted, said of the possibility of another referendum that "we cannot discard any option that is democratic and peaceful."

The 2017 referendum was ruled illegal before it was held and led to violent confrontations with Spanish authorities and the imposition of direct rule from Madrid.

Catalan's former president, Carles Puigdemont, who fled to Belgium after independence failed, took to Twitter to proclaim: "Today we again show the world that we persist despite repression, that we have the right to live in peace and freedom, and that no one can decide our future for us."

Catalonia's separatist movement, which still holds power in the regional government, has become splintered, with some advocating confrontation and others favoring dialogue with Madrid.

The latter has become a more realistic option with Spain's socialist Prime Minister Pedro Sanchez, who has taken a less hardline approach to the issue than his conservative predecessor Mariano Rajoy.

Sanchez tweeted that "Today should be a day that unites all Catalans. On the path of dialogue within the Constitution, coexistence, respect, and understanding."

Though the September 11 commemoration, known as Daida, has been long celebrated, separatists began using it as an opportunity to rally for independence in 2012. In the past, as many as one million Catalans have participated.

Recent polls, however, indicate that support for independence is on the wane, with only 44% of respondents voicing support for it and 49% opposition to it in a statewide July poll.