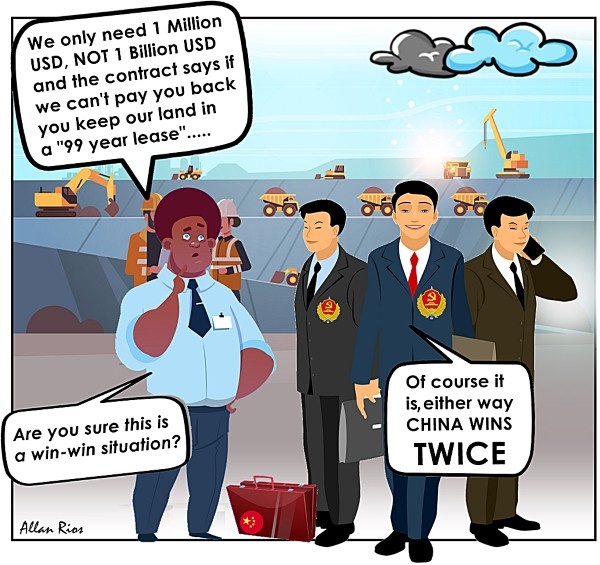 Allan Rios, 42, who goes by the pen name Dedoshucos, says that one of the topics he is most passionate about is the Chinese Communist Party's (CCP) use of the "death trap policy" to further its international influence. Rios said he began researching the subject more deeply last year after Mike Pence's Hudson Institute speech in 2018 and was finally able to express his concern through this political cartoon.

On Tuesday, Rios posted an illustration on Reddit showing an African leader questioning the fairness of a so-called win-win deal in which his country is given a far larger loan than what was requested on the condition that inability to repay it would result in handing over part of his nation's land in the form of a 99-year lease. In response, one of three Chinese businessmen in suits emblazoned with the CCP logo says that it is definitely a "win-win" deal because, "either way, China wins twice!"

Rios told Taiwan News that as a native of Latin America, this type of political corruption at the expense of the general population already living in poverty in developing countries exploited by the Chinese government "really feels personal to me."