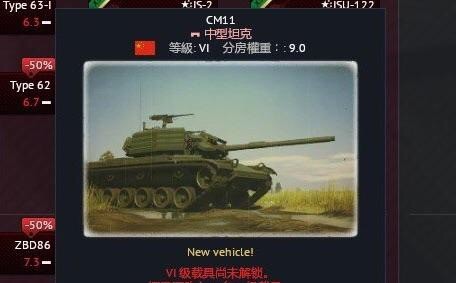 TAIPEI (Taiwan News) -- The video game War Thunder, which is a game predicated on historical accuracy, last week suddenly and expectedly created multiple historical anachronisms by removing all the Taiwan flags from the vehicles in the game and erroneously replacing them with the banner of Communist China.

On Friday (Sept. 6), Niche Gamer reported that the Taiwanese flags corresponding to military vehicles in the game have been removed and replaced with the flag of China in the game War Thunder. The game, which is a vehicular combat massively multiplayer online (MMO) game developed by Russian-owned Gaijin Entertainment, is a based on combined arms battles which are set from the end of WWI to the Cold war, with a particular emphasis on WWII.

Players utilize aircraft, tanks, and ships from various nations, with each war machine marked with the historically accurate flag of the country they were associated with in a given war. The game was first released in August of 2013 and published by Tencent Games in China in April of 2014. On Sept. 6, gamers started to notice the strange change, and began to complain on forums and the company's Facebook feed. Gamers complained that slapping Communist Chinese flags on weaponry that clearly was used by Taiwan and not China in various theaters over time was historically inaccurate.

The focus trees for categories of vehicles in the game which originally listed war machines from Taiwan with the Taiwanese flag and equipment from China under the Chinese flag, suddenly lumped everything under "China." When a user clicks on an individual Taiwanese vehicle, the flag of Communist China erroneously appears above it.

For example, the CM-11 Brave Tiger is a tank exclusively built in Taiwan in cooperation with American defense contractor General Dynamics. In the new version of the game, the CM-11 is displayed with a Chinese flag above it, despite the fact that this tank has never served in China's arsenal at any stage in history. One gamer wrote, "Hey Gaijin, why did you replace the ROC (Republic of China) flag of a few vehicles in the game and place the PRC (Peoples Republic of China) on every vehicle there instead? Even those pre-PRC vehicles from the 1930's-1940's like the Flying Tiger P-40?" While another wrote, "I wonder, what does Gaijin have against Taiwan and Chinese tanks in the same focus tree? As this is ridiculous, how this is still even happening today, how people are denying the existence of Taiwan?

When Tsai Ing-wen (蔡英文) took office as Taiwan's president in 2016, she refused to recognize the "1992 Consensus" and only acknowledged that the 1992 Taiwan-China talks were a "historical fact." In response, China has been seeking to punish Taiwan by excluding it from international organizations, ramping up military drills around the island, stealing away diplomatic allies, and intimidating government bodies and corporations to de-list Taiwan as a country and remove its flag from their websites.