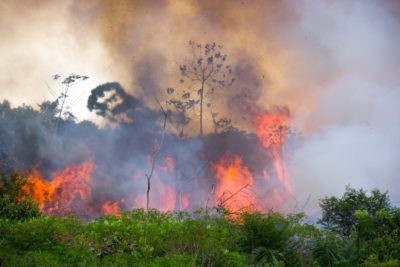 It's the planet's lungs, producing about 20% of the world's oxygen. And it's on fire.

Despite a ban by Brazil's government on deliberate burning, almost 4,000 new forest fires rage in the Amazon, representing an 84% increase from the same period last year.

The international community has reacted with despair, with hashtags such as #PrayForTheAmazon going viral. But while they look in horror, loggers and ranchers continue to set the Amazon ablaze to make way for soybeans and cattle.

“It's easy to blame others – whether ranchers or politicians – for these fires, while overlooking our own culpability,” says WildAid Climate Director Jen Leung. “For a long time now, the global hunger for beef and animal feed has led to the destruction of the Amazon as well as to the current tragedy unfolding before our eyes.”

As the world's largest exporter of beef, Brazil provides close to 20% of the total global exports, according to the United States Department of Agriculture. Roughly 40% of that is bound for Asia. Globally, meat production today is nearly five times higher than in the early 1960s.

As a result of increased demand for meat, Brazil's President Jair Bolsonaro spearheaded the expansion of the farming industry and has dismissed extending protections to indigenous groups that live in the forest, leading to worries that deforestation rates could further increase.

Brazil is not alone in its destructive practices. The world's land and water resources are being exploited at unprecedented rates, according to an August 2019 report released by the United Nations Intergovernmental Panel on Climate Change. While climate change makes agriculture more difficult, agriculture itself is also exacerbating climate change. The fires in the Amazon, for example, are potentially accelerating climate change by adding significant amounts of carbon dioxide, a potent greenhouse gas, to the atmosphere.

The solution, says the report authors, is to make the food system more efficient by changing how food is produced and distributed, including better soil management, crop diversification and fewer restrictions on trade. They also call for shifts in consumer behavior, noting that at least one-quarter of all food worldwide is wasted.

“Policymakers can implement changes that promote smarter agricultural and trade practices, but individuals can also help by choosing more sustainably-sourced food and eating less meat,” says Leung. “By decreasing our reliance on beef, we can put our money where our mouth is and help save Brazil's precious Amazon rainforest.”

To combat agriculture's exacerbation of the climate crisis, WildAid is committed to empowering individual consumers to mitigate climate change and reduce their carbon footprint by choosing more sustainable, low-carbon lifestyles.