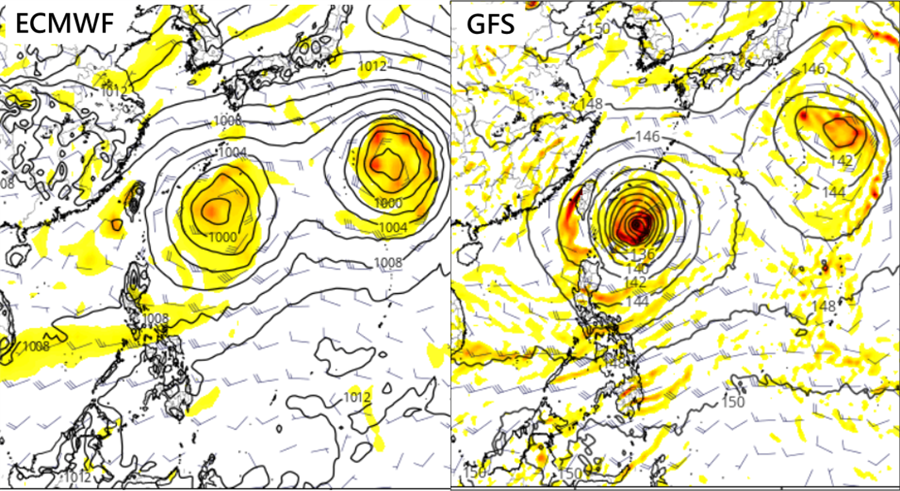 TAIPEI (Taiwan News) -- Tropical Storm Peipah (琵琶) could take shape as soon as Tuesday (Sept. 10), possibly bringing cloudy skies and rain to northern and eastern Taiwan during the Mid-Autumn Festival, putting a damper on moon-viewing during the holiday.

The Central Weather Bureau (CWB) said that a low-pressure system loitering in the sea to the east of the Philippines could transform into a tropical depression later this afternoon (Sept. 9). By Tuesday, the CWB said that the tropical depression could then intensify to Tropical Storm Peipah, the 16th tropical storm of the year.

CWB forecaster Lee Meng-hsuan (李孟軒) said that from today through Thursday (Sept. 12), all parts of the country will see relatively stable weather, with the exception of afternoon thunderstorms, particularly in mountainous areas and Taipei. In terms of temperatures, highs will range between 32 and 34 degrees across Taiwan until Thursday. However, by Friday, the Mid-Autumn Festival, the weather will start to become unstable, predicted Lee. On Friday, Saturday, and Sunday (Sept. 13, 14, and 15), the tropical system could bring increasing amounts of clouds, wind, and rain to northern and eastern Taiwan.

Lee said that at present, the intensity of the low-pressure system is very chaotic and uncertain, but because the system has a wide belt, it is predicted to move to the waters east of the Philippines and near Taiwan. Lee said that as long as the system becomes a tropical storm, it will likely have some impact on Taiwan in the form of rain, particularly northern and eastern Taiwan.

Lee said that due to the effects of the tropical system, cloud cover will probably obscure the moon in northern and eastern Taiwan during the Mid-Autumn Festival. However, residents of southern and central Taiwan "may still be able to enjoy the moon," said Lee.

The latest European and American weather models show the tropical system developing in the waters to the east of the Philippines from Tuesday through Thursday. The Global Forecast System (GFS) predicts that the tropical system will strengthen and near the east coast of Taiwan by Sunday, while the European Centre for Medium-Range Weather Forecasts (ECMWF) model shows the storm being less intense, but neither model shows the system invading Taiwan by that date.