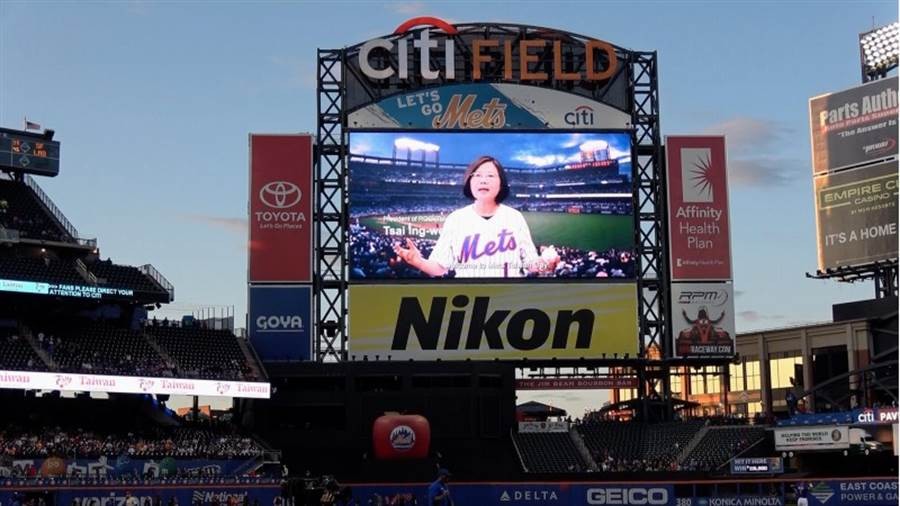 Prior to the start of a Major League Baseball game at the Met's home Citi Field where they squared off against Philadelphia Phillies, Tsai appeared in a one-minute video in which Tsai introduced Taiwan's destinations, food, and passion for baseball. The video was part of the celebrations to mark the 15th annual Taiwan Day in the Flushing neighborhood of Queens, where the majority (58 percent) of Taiwanese New Yorkers live, based on 2010 Census data.

In the video, Tsai starts by saying, "Hi Mets fans, I am Tsai Ing-wen, president of Taiwan. Welcome to Mets' Taiwan Day." Tsai then said that she would like to share "our beautiful country with you today," as the screen cuts to Taroko Gorge, Hualien, a man doing Tai Chi in front of Taipei 101, a night market, and some of Taiwan's famous dishes. Tsai then pointed out that baseball is one of the most popular sports in both Taiwan and the U.S. and that many Taiwanese have played in the major leagues. She then added "I'm sure that we'll see even more Taiwanse baseball players in the future," as highlights of former Mets infielder Hu Chin-lung (胡金龍) flash on the screen.

Tsai then introduced Taiwanese Youtuber Tsai Aga and said that he would throw out the first pitch for the Taiwan Day celebrations. She then handed him a baseball and the two exclaimed, "Let's go Mets, let's go Taiwan!" which led to a wave of cheers from the crowd.

The Mets told CNA that Tsai is the first foreign president to sport a Mets jersey and make an appearance on the team's big screen. Unfortunately, the Mets ended up losing the game to the Phillies 5 to 0. At a press conference after the game, Tsai Aga joked that he purposely threw a slow ball to avoid being drafted by the Mets and leaving his family behind, reported CNA. Lily Hsu (徐儷文), head of the New York office, told the news agency that the video was was meant to promote sightseeing in Taiwan and "its most beautiful scenery, its people."