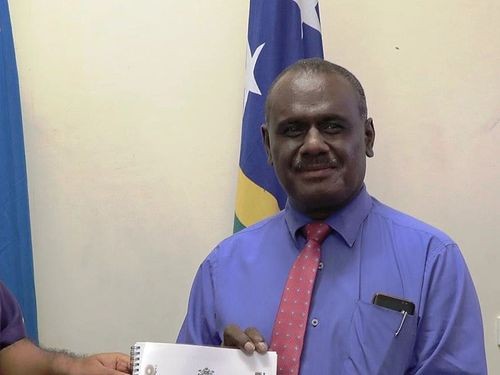 The Ministry of Foreign Affairs (MOFA) on Saturday announced a 5-day visit by Solomon Islands Foreign Minister Jeremiah Manele beginning Sept. 8, amid speculation of a possible switch in political allegiance by Honiara to Beijing.

"MOFA warmly welcomes Jeremiah Manele, foreign minister of the Solomon Islands, our Pacific ally, who is scheduled to arrive in Taiwan for a visit scheduled for Sept. 8 to 12, together with his delegation," MOFA said in a press statement.

Manele will meet with President Tsai Ing-wen (蔡英文), Foreign Minister Joseph Wu (吳釗燮) and attend a banquet hosted by Wu, according to the press statement.

The purpose is for the delegation to gain a more comprehensive appreciation of Taiwan's agricultural technology and related developments for the expansion of bilateral cooperation in new fields, MOFA said.

While this will be Manele's first visit to Taiwan as the Solomon Islands' top diplomat since he assumed the post in May, he has visited Taiwan several times in the past in other official capacities, MOFA said.

Manele's visit is "significant to the Taiwan-Solomon Islands friendship" and comes in the wake of Solomon Islands Parliament Speaker Patteson Oti attending the Asia-Pacific Parliamentarians' Union (APPU) annual gathering in Taipei in early August and Solomon Islands Prime Minister Manasseh Sogavare's meeting with Wu in Tuvalu on the sidelines of the Pacific Islands Forum mid-August and witnessing the signing of a visa waiver agreement, MOFA added.

"Both countries will continue to deepen friendly cooperative relations upholding the principle of mutual assistance for the benefit of both sides," MOFA said.

Manele's visit comes at a time when Taipei-Honiara relations are being tested due to Beijing efforts to further isolate Taiwan in the international community.

The Solomon Islands' new government declared a review of its relations with Taiwan and China following a general election in April and a task force formed for the purpose has toured Papua New Guinea, Vanuatu, Fiji, Tonga and Samoa, all Pacific nations allied to Beijing, and is supposed to submit its assessment on the issue "within this week," according to reports from foreign media.

Over the past few days, however, MOFA has been reassuring the nation over bilateral relations with Honiara​​​​​​​, citing cooperation projects and interactions between high-level officials.