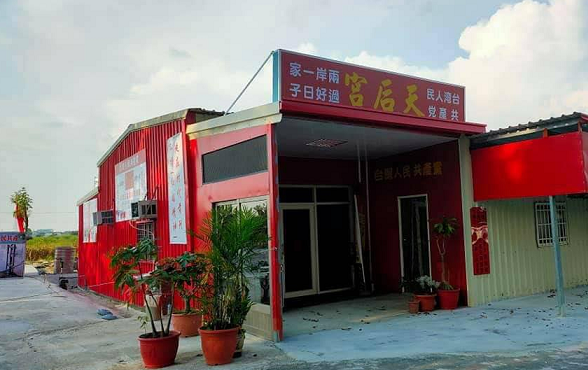 TAIPEI (Taiwan News) – On Friday (Sept. 6), the local government of Tainan City declared that a so-called “temple” dedicated to the goddess Matsu and co-opted by supporters of the Chinese Communist Party (CCP) is an illegal structure.

The owners of the incongruously titled “Taiwan People’s Communist Party Matsu Temple” (台灣人民共產黨天后宮) have been given one week to make adjustments to ensure the structure complies with local regulations. This will likely mean destruction of the building and removal of political symbols like the red five-star flag of China which flies outside the “temple.”

According to Tainan Public Works Bureau, the thin-walled structure was constructed without a proper permit on land that can only be legally utilized for agricultural purposes, reports Liberty Times. Lin Te-wang (林德旺), who is the head of the Taiwan People’s Communist Party (台灣人民共產黨) is responsible for the structure located in Tainan’s Sinying District (新營).

Wang Ting-yu (王定宇), a local politician from the Democratic Progressive Party (DPP) brought attention to the structure earlier in September by posting photos on Facebook and questioning the motives and purpose of the building. Wang noted the obvious fact that, in China, the Communist Party would not support religious activities like worshiping Matsu. Wang has called the display of the Chinese flag “unacceptable.” Officials with Tainan’s Civil Affairs Bureau also noted that the Taiwan People’s Communist Party, which was founded in 2007, is not legally registered, as it has failed to comply with updated amendments to the Political Party Act, as promulgated in 2017.

Liberty Times reports that the structure was previously a betel nut stand. The communists chose to rent the location and modify the structure for their party headquarters because no one in Tainan would lease a suitable location for their political party meetings.

The story is similar to the case of a Buddhist temple in Taiwan’s Changhua County that was controversially defaced and converted into a shrine for the CCP. Like the so-called “Communist Matsu Temple” in Tainan, the CCP “Patriotic Education Base” in Changhua was also ordered to be destroyed in September 2018, because the structure was found to be in violation of building regulations.