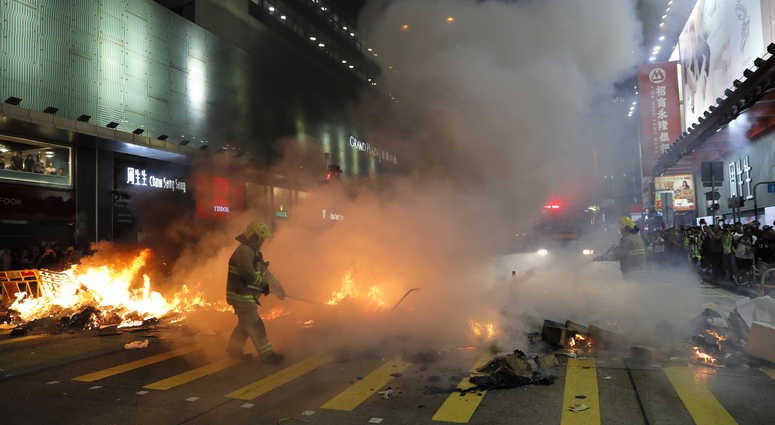 Express train service was to run from the station in downtown Hong Kong directly to the airport, skipping all stations in between, and only those with flight tickets would be allowed to enter the terminals, airport officials said.

Police mounted road checks and inspected passengers on trains and buses heading to the airport in pre-emptive measures to weed out protesters. An Associated Press journalist at an area near the airport witnessed at least two bus passengers being handcuffed and taken away after police found face masks in their bags.

Several hundred masked protesters converged instead at a metro station in the Tung Chung area adjacent to the airport, chanting slogans and calling police “murderers” amid widespread anger over alleged brutality against demonstrators. Shops at the station shuttered and riot police stood watch.

The airport, the world’s eighth busiest, has been a frequent target during a summer of protests sparked by an extradition bill that would have allowed criminal suspects in the semiautonomous Chinese territory to be sent to mainland China to face trial. Many saw the bill as a glaring example of the city’s eroding autonomy since the former British colony returned to Chinese control in 1997.

Hong Kong leader Carrie Lam announced Wednesday that her government would withdraw the bill, but that failed to appease protesters who have expanded their goals to include other issues.

The airport rail link was suspended last weekend after protesters threw objects on the track, blocked roads near the airport with burning barricades and damaged a metro station. Last month, the airport was shut down for two days and hundreds of flights were canceled after protesters occupied the terminals, leading to violent clashes.

There were calls online for protesters to shed their trademark black shirts and forge boarding passes to gain access to airport terminals.

Police warned that plans to use fake boarding passes to gain entry could land offenders up to 14 years in jail. Police also said motorists who intentionally slow down to disrupt traffic could be charged for dangerous or reckless driving.

Demonstrators retreated after riot police chased them down streets but they regrouped again. Some lit piles of boxes to build burning barricades while others used hammers and metal rods to smash traffic lights and vandalize subway stations. Graffiti along walls read “Boycott China” and “Liberty or death.”

Police said three subway stations had to be shut down after protesters thrashed ticket machines, security cameras and turnstiles and damaged fire facilities. Police slammed the behavior as “outrageous” and vowed to take “resolute enforcement actions.”

The persistent violence has hurt Hong Kong’s economy and sparked fears of a Chinese military intervention. Chinese officials have warned that Beijing will “not sit idly by” if the situation worsens.

Protesters have adopted a new slogan, “Five key demands, not one less.” In addition to the withdrawal of the extradition bill, they want an independent investigation into accusations of police brutality, the unconditional release of those detained during the protests, no more labeling of the protests as riots and direct elections of the city’s leaders.

Lam has rejected those demands.

The protests show no signs of abating ahead of China’s National Day celebrations on Oct. 1 despite Lam’s concession on the extradition bill. Protesters plan to march to the U.S. Embassy on Sunday to drum up international support.