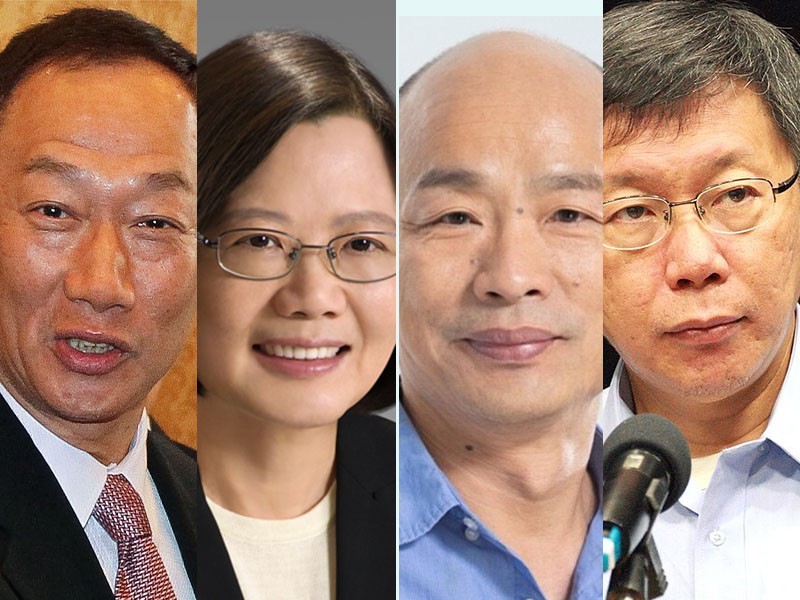 In the interest of Taiwan

The office of Foxconn founder Terry Gou issued a statement on Sept. 5 saying that the tycoon will make clear his intentions about whether launch a 2020 presidential campaign on Sept. 17 and that the decision will be made in the interest of Taiwan. Gou will be visiting the U.S. in October, the office said, adding that there is no need to arrange the trip through American Institute in Taiwan. The office also cautioned against framing the trip as “reporting to the U.S.,” noting that Taiwanese elections are solely the business of Taiwan.

A running mate should be complementary

The office of Foxconn founder Terry Gou said on Sept. 5 that Gou is a political neophyte, so it would be wise to find a running mate who can complement him should he make a presidential bid.

All visitors to Taiwan deserve respect

heast Asia seeking illegal employment such as prostitution. President Tsai Ing-wen said in an interview on Sept. 5 that everyone who comes to Taiwan should be treated with respect and not discriminated against, adding that elected officials should avoid controversial comments when it comes to migrant workers and new immigrants.

Foxconn founder Terry Gou (郭台銘) asked President Tsai Ing-wen (蔡英文) to join him in a debate on industry structure and the future of Taiwan. Tsai replied on Sept. 4 that a number of measures have been taken since she assumed office to improve the island’s industry structure and counteract the impact of the U.S.-China trade war. She said that Taiwan has made progress on reducing its reliance on a single market and called on Gou to “increase investment in Taiwan.”

In an interview on Sept. 4, President Tsai Ing-wen expressed support and concern for those fighting for greater democracy in Hong Kong but said Taiwan would refrain from meddling in Hong Kong affairs. She instead promised Taiwan would provide humanitarian assistance to Hong kongers.

“We are a family”

President Tsai Ing-wen said in an interview on Sept. 4 that people residing in Taiwan, whether or not they were mainlanders, or relatively recent arrivals from China, have become one family with the sole responsibility of protecting Taiwan. The statement was made to refute remarks by Taipei Mayor Ko Wen-je (柯文哲), who once said he disliked mainlanders.

The definition of hate talk

Kaohsiung Mayor Han Kuo-yu (韓國瑜) complained the other day that he has fallen victim to “hate Han talk,” while nobody dares to do the same to President Tsai because she is the president, and the presidential office always fires back with legal action against such derogatory comments. In response, Tsai said on Sept. 4 that Taiwan is a democracy and that political figures are confronted with equal challenges amid elections. Saying that she wasn’t sure how hate talk is defined, Tsai suggested that politicians who are victims of hate talk provide clarification and resort to legal action if necessary.

Securing as much strength as possible to safeguard Taiwan

Han Kuo-yu said on a talk show that he opposes Taiwan’s independence and asked those who embrace the idea to vote for President Tsai. In response, Tsai said she would like to secure support both from those in the “Republic of China” camp and the “Taiwan” camp. What matters most is to generate as much strength as possible to safeguard Taiwan, Tsai stressed.

To run for president or complete a mayoral term

Asked if he would join Foxconn founder Terry Gou on a presidential ticket as a vice presidential candidate, Taipei Mayor Ko Wen-je said on Sept. 5 that he would not consider being a running mate. He would either throw his hat into the ring or fulfil his term as mayor of Taipei. No easy task to sway voters

Taipei Mayor Ko Wen-je (柯文哲) founded the Taiwan People’s Party (TPP) in what some interpreted as a move to aid Foxconn founder Terry Gou in his potential 2020 bid for the presidency. However, a poll suggests that instead of turning to Gou, TPP supporters are switching their allegiance to Tsai. The poll results have been dismissed by Ko, who said on Sept. 4 that it is not easy to sway his staunch supporters.

Taipei Mayor Ko Wen-je once said, “Families of 228 victims like us hate mainlanders,” remarks which brought him criticism. He defended himself on Sept. 4, saying that his remarks just reflected the anti-mainlander sentiment that has permeated through his family since childhood. Seven decades have passed since the 228 incident, and it is time that people moved on, said Ko.

Kaohsiung Mayor Han Kuo-yu has drawn criticism over his comment that “phoenixes flying away and a bunch of chickens coming in,” which some have alleged were a reference to Taiwan’s brain drain and the inflow of migrant workers. During a video live stream on Sept. 4 night, he attempted to clarify the contentious remarks, saying he was referring to complaints he had received from Customs about the surge of visitors from New Southbound Policy countries seeking prostitution or other illegal employment. Note: This statement has been denied by the Customs Administration, which says the matter should be handled by the National Immigration Agency.