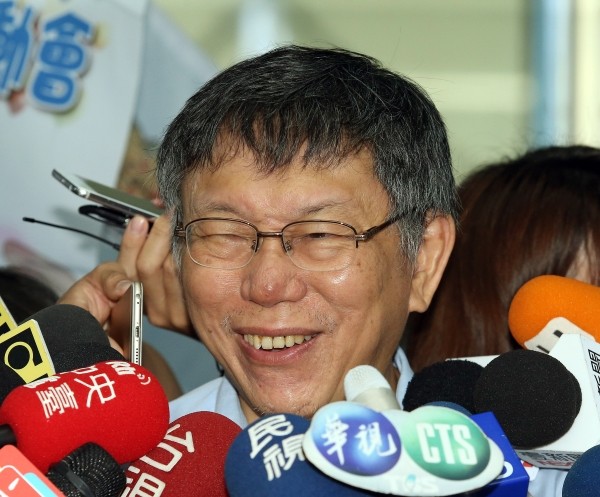 After presiding over the opening ceremony for the new Zhongzheng District Social Welfare Complex today (Sept. 6), Ko was mobbed by a swarm of reporters. Ko had apologized for leaking the news that Taiwanese supermodel Lin Chi-ling (林志玲) was pregnant and regretted violating doctor-patient confidentiality.

On Thursday (Sept. 5) Democratic Progressive Party legislator Tuan Yi-kang (段宜康), in a comment, mocked Ko by saying he is "a Han Kuo-yu that is better at taking exams." When reporters asked him to respond to Tuan's comment, Ko said he would not put it that way, he then sarcastically blurted out "Then Little Tsai [Tsai Ing-wen] is a Han Kuo who is relatively bad at taking tests. Chen Chu is a relatively fat Han Kuo-yu?"

The moment Ko appeared to make fun of Chen's physical appearance, reporters went into a frenzy and they immediately asked him if that was a slip of the tongue, or wanted to make a fuss about Chen. However, Ko stayed on the offensive, "So has Han Kuo-yu become an adjective or a noun?"

Ko then said, "The new trend is if you hit me, I will definitely fight you." He then repeated, "I'll tell you, Little Tsai is a Han Kuo who is relatively bad at taking tests," but he did not repeat what he had said about Chen. When reporters asked Ko to explain his apparently discriminatory comment about Chen, he said, "Another two hours needs to be added to the sex education class."

Ko's secretary then stepped in and whisked the mayor downstairs to attend a performance by children from the Taipei Parents' Association for Persons with Intellectual Disability.