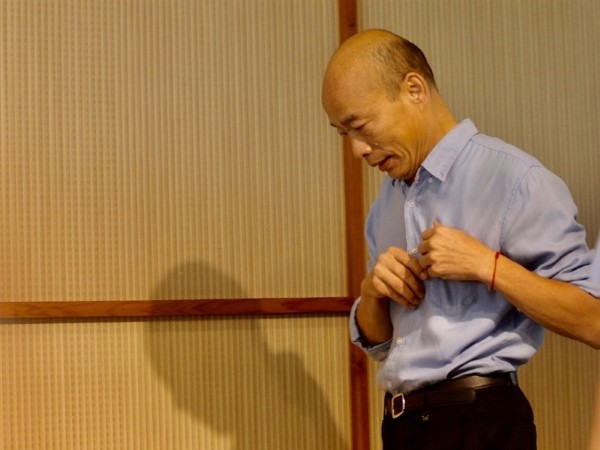 Han has been falling behind is rival, incumbent Taiwan President Tsai Ing-wen (蔡英文), in the latest polls, including a drop of 8 percent in the KMT-leaning news site TVBS. The drop has been so precipitous in recent weeks that veteran journalist Huang Chuang-shia (黃創夏) exclaimed, "I declare that Han has collapsed!"

On Sept. 4, the Green Party Taiwan on Wednesday (Sept. 4) released the results of a poll conducted in collaboration with SET News on its Facebook page. The survey showed that support for Han had dropped to 33.8 percent, 13.8 percentage points behind Tsai, showing that she is starting to pull away from the former manager of the Taipei Agricultural Products Marketing Corporation.

From Sept. 2 to 3, a total of 535 respondents on landlines and another 535 on cell phones were surveyed. After weighting gender, age, and household registration, the survey was found to have a sampling error of plus or minus 3 percentage points and a confidence level of 95 percent.

In the poll, Tsai received the support of 47.6 percent of respondents, while only 33.8 percent opted for Han, giving Tsai a substantial lead of 13.8 percent. If Gou and Ko, neither of whom have declared a run for the presidency, are thrown into the mix, Tsai gained the support of 31.8 percent of respondents, while Han trailed at 26.1 percent, 17 percent backed Ko, and Gou pulled up the rear at 16.7 percent.