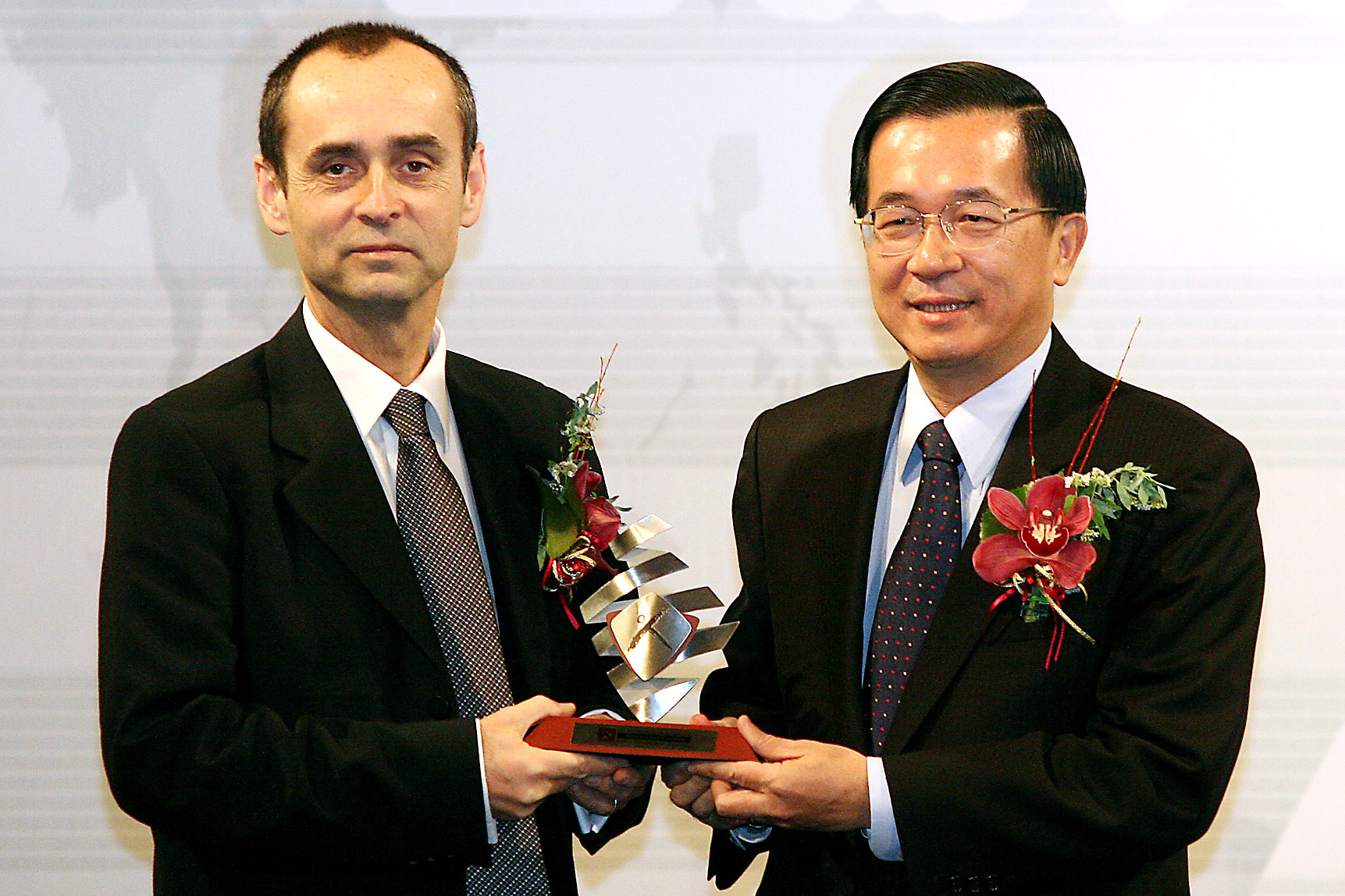 President Chen Shui-bian (陳水扁) yesterday said that advice and criticism have been the driving force enabling Taiwan's democratization and reforms to continue during the period of democratic transition.
Chen said that over the past six years, he has pushed for an open, fair, free and neutral media environment in Taiwan, while building an impartial supervisory mechanism to govern it.
Chen made the remarks at a ceremony held by the Taiwan Foundation for Democracy (台灣民主基金會), at which Reporters sans Frontieres (Reporters without Borders) Secretary Robert Menard accepted the 2006 Asia Democracy and Human Rights Award on behalf of RSF. Menard, who arrived in Taipei Friday to receive the award in person, received the first such award on behalf of RSF.
Speaking at the ceremony, Chen said that In 2006, Taiwan advanced to a world ranking of 43rd in the global freedom of the press index, up eight notches from the 51st position in 2005 and leading Japan's 51st place and the United States' 53rd place.
As one of the true democracies in Asia, Taiwan should treasure its hard-earned fruits of democracy and its freedom of the press, he said.
He noted that presently about one-third of the world's population live in countries or areas where there is no press freedom. In Asia in particular, there are still some countries where the media is suppressed and news reporting censored, he said.
Today, he said, there are still many people in China sentenced to death on charges of leaking national intelligence simply because they have defended the truth of the news.
Imprisoning or killing a journalist is like eliminating a key witness and threatens everyone's right to be informed, Chen said.
He said the establishment of the Asia Democracy and Human Rights Award in 2006 represents Taiwan's commitment and responsibility to pushing for democratization in the international community.
"I believe that Taiwan's insistence on the values of democracy and freedom and their implementation has had positive clout in the international community," he noted.
Chen said the Taiwan Foundation for Democracy conferred the 2006 Asia Democracy and Human Rights Award on the France-based RSF after many world renowned human rights specialists, including Nobel laureate Shirin Ebadi, made recommendations and after fair, independent screening by a panel of judges.
'Unacceptable'
Upon receiving the honor, Menard said that Taiwan journalists and camera crews "have the right to cover news at any international organization" and it is unacceptable that they have been barred from the United Nations and related groups.
Menard also called on the international community to take advantage of the 2008 Olympic Games to push for greater press freedom in China.
He said the Chinese authorities had turned down appeals for release of some 80 journalists and Internet users there.
He said Beijing started to make some gestures on the sensitive issue when the group made an official visit to the mainland last week.
"For the first time, we were able to raise the issue of imprisoned journalists and Internet users in face-to-face talks with government and Communist Party officials. Promises were made to us," Menard said in his speech translated into English.
While saying the RSF would watch to see if Beijing would honor its promise, Menard said, "We must all seize the opportunity offered by the holding of the Olympic Games in Beijing and the World Expo in Shanghai to get people released and to obtain more freedom of expression."
Menard dismissed Beijing's argument that freedom does not fit with Chinese society.
"We hear people, politicians and self-styled specialists explain that freedom is not compatible with Chinese culture, traditions and history, but Taiwan is the proof that all this is false," he said.
Menard also blamed the international community for turning a blind eye to the imprisonment of those people in China due to economic considerations.
"Those who are blinded by the Chinese market, the euros and dollars that it can yield, should be reminded that more than 80 journalists and Internet users are currently being held by the Chinese authorities," Menard said.
And that, although the market has opened up in recent years, the press and the Internet are still kept under surveillance and are still controlled, he said.
The Chinese foreign ministry announced in November that China would allow foreign journalists greater freedom to report across the country ahead of the Beijing Olympic Games, but only until October 2008.
Menard, who established RSF in France in 1985 aimed at fighting for freedom of the press and freedom of expression and ensuring the protection of journalists by denouncing human rights breaches, said the US$100,000 prize money that comes with the award will be used to finance the establishment of a new RSF Web site in Chinese aimed at allowing more Chinese-speaking people to be better informed and helping those journalists who have been persecuted.