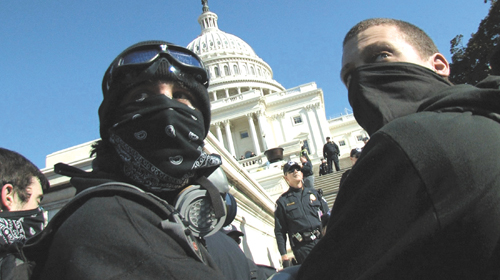 Chanting "bring our troops home," tens of thousands of anti-war protesters rallied in front of the U.S. Capitol on Saturday to pressure the government to get out of Iraq.
Veterans and military families joined some lawmakers, peace groups and actors including Vietnam war protester Jane Fonda and Sean Penn to urge Congress and U.S. President George W. Bush to stop funding the war and pull troops from Iraq.
"When I served in the war, I thought I was serving honorably. Instead, I was sent to war ... for causes that have proved fraudulent," said Iraq war veteran Garett Reppenhagen.
"We need to put pressure on our elected government and force them to ... bring the troops home," said the former sniper to cheers from the crowd at a rally held on the National Mall.
Tens of thousands of people attended the rally, according to a park police officer.
For more than two hours, speakers criticized Bush and the U.S. presence in Iraq before protesters marched around the Capitol.
A group of families of soldiers killed in Iraq stood holding pictures of their loved ones, including one photo of a soldier in full dress uniform lying in a coffin.
More than 3,000 U.S. troops and tens of thousands of Iraqis have been killed since the 2003 invasion of Iraq.
The protest was one of several expected around the country, including a large march scheduled in Los Angeles. Protesters planned coordinated efforts during the week to lobby lawmakers to take action against the war.
Asked about the protests, White House national security adviser spokesman Gordon Johndroe said Bush "understands that Americans want to see a conclusion to the war in Iraq and the new strategy is designed to do just that."
The demonstrations come amid growing efforts by lawmakers to protest Bush's plans in Iraq. The Senate Foreign Relations committee passed a resolution on Wednesday opposing the plan to send more troops to Iraq.
Protesters said they hoped to send Bush and Congress a message that Americans did not support the war.
"I'm convinced this is Bush's war. He has his own agenda there," said Anne Chay, holding a sign with a picture of her 19-year-old son, John, who is serving in Iraq. "We're serving no purpose there."
Bush hits new low
Bush's popularity fell to a new low following his state of the nation speech this week, Newsweek reported in its latest poll Saturday.
With two years left in the White House, only 30 percent of the 1,003 people polled said they approved of Bush's job performance, down from a high of 83 percent approval at the beginning of 2002.
The poll was taken after Bush's annual State of the Union address delivered Tuesday, in which he announced a new Iraq strategy and major initiatives to improve health insurance coverage and to reduce U.S. dependence on foreign oil.
A hefty 71 percent of those surveyed said Bush would not have enough support over the next two years to "make a difference" in carrying out his decisions, compared with just 21 percent who said he did.
The poll, which came days after several more politicians made moves to join the 2008 presidential race, including Democratic Senator Hillary Clinton, also tested registered voters on possible matchups in the November 2008 election.
Putting Clinton versus Senator John McCain, one of the two frontrunners for the Republican nomination, Newsweek said voters favored Clinton by 50 percent to 44 percent, with six percent undecided.
Two other Democrats currently seen as having a chance for the party's nomination, Senator Barack Obama and former senator John Edwards, each also bested McCain in a matchup, 48-42 for Obama and 48-44 for Edwards.
Against the other leading Republican candidate, former New York mayor Rudolph Giuliani, Clinton came out ahead 49-46 percent and Obama led by 47-44 percent.
But Edwards, who was John Kerry's vice presidential running mate in a failed bid against Bush for the presidency in 2004, lagged behind Giuliani 46-47.
In a third matchup, against Republican former Massachusetts governor Mitt Romney, all three Democrats led by wide margins.