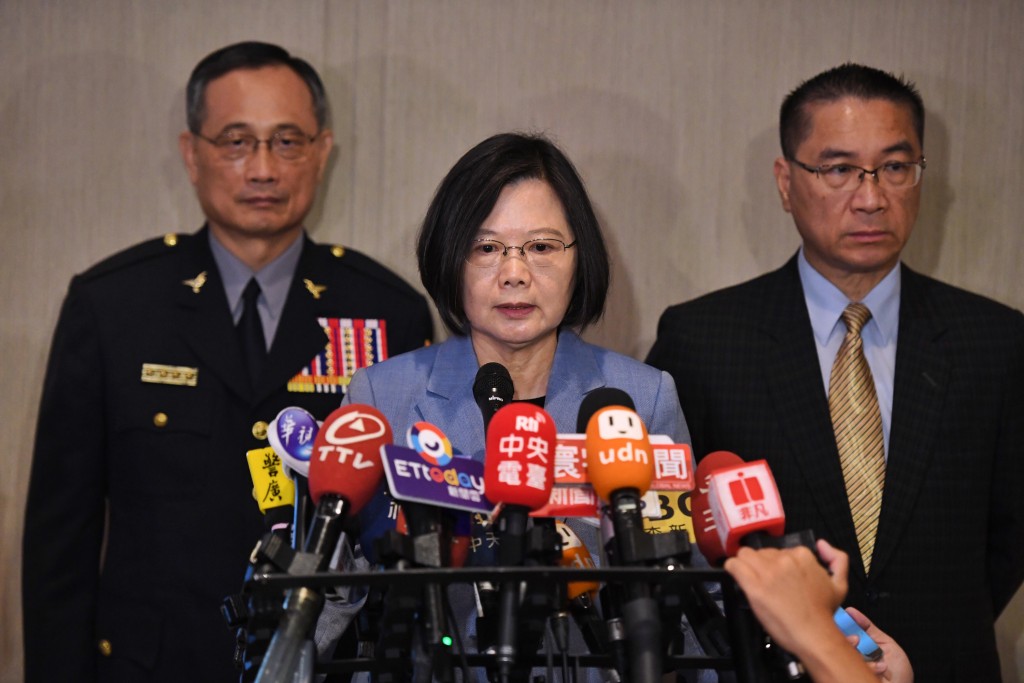 TAIPEI (Taiwan News) — President Tsai Ing-wen (蔡英文) on Wednesday (Sept. 4) ruled out the possibility of a refugee act for Hongkongers despite a plea from pro-democracy activist Joshua Wong (黃之鋒), who is visiting Taiwan.

“Our current laws have provided sufficient foundations for us to offer assistance to Hong Kong’s people when necessary,” Tsai said, after attending an international forum on police cooperation in Taipei. She was referring to the legislation governing Taiwan’s relationship with Hong Kong and Macau.

Tsai’s comments come at a time when some politicians and non-governmental organizations (NGO) are calling for refugee legislation that would grant asylum to Hongkongers who face riot charges for taking part in the anti-extradition bill protests. The current refugee draft bill, which passed the first reading by the legislature, does not cover citizens of Hong Kong and Macau.

Wong, who arrived in Taipei on Tuesday (Sept. 3) with Hong Kong politician Eddie Chu (朱凱迪) and activist Lester Shum (岑敖暉), said one of the objectives of his visit was for Taiwan to provide substantive help to Hongkongers living in Taiwan, as well as to those who might have to flee to the island if the standoff between protesters and the Hong Kong government continues to deteriorate. The three activists met with the representatives of the Democratic Progressive Party (DPP) and New Power Party (NPP) respectively on their first day in Taiwan.

“We do not interfere [in Hong Kong’s protests], but we highly support Hongkongers’ pursuit of freedom and democracy,” Tsai said on Wednesday. On Monday (Sept. 2), the president instructed the cabinet to provide “necessary assistance” to Hong Kong’s people in Taiwan in accordance with existing laws and based on humanitarian grounds, during a national security meeting.

The number of Hong Kong demonstrators being arrested has risen as anti-government protests head into a fourth month, with demands for an independent inquiry into police handling of the protests and universal suffrage for Hong Kong’s citizens. According to figures disclosed by the Hong Kong police, more than 1,000 protesters have been arrested for their involvement in the protests.

Taiwan’s Mainland Affairs Council (MAC) has said the current legislation governing residents of Hong Kong and Macau stipulates the government should offer assistance to Hong Kong’s people, if their safety and freedom are at risk due to political factors.

For those who seek asylum status in Taiwan, the government will deal with them on a case by case basis, added MAC. It has so far allowed Hong Kong bookseller Lam Wing-kee (林榮基), who fled to Taiwan in April over extradition fears to China, to stay in Taiwan through visa extensions.

Despite widespread support for Hong Kong’s pro-democracy protests in Taiwan, legislation that grants asylum to Hong Kong’s residents has sparked concerns over national security. Thousands of Chinese people have obtained permanent residency in Hong Kong through the one-way permit system after the city was handed over to China by the U.K in 1997.