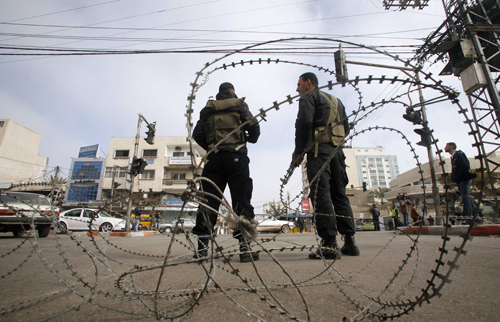 Hamas and Fatah gunmen battled each other in the streets of the Gaza Strip on yesterday, having sent civilians fleeing from their homes in an increasingly bloody power struggle that left more than two dozen Palestinians dead over the weekend.
An explosion early in the morning rocked the Gaza City home of a bodyguard to Fatah strongman Mohammed Dahlan, but the guard was not in the building and no casualties were reported. At least eight people were wounded in exchanges of fire between the sides overnight, Palestinian security officials said.
The latest round of fighting began late Thursday after a Hamas activist was killed in a bombing. By Saturday night 25 Palestinians - including a 2-year-old and a 12-year-old - had been killed and at least 76 were wounded, bringing to a standstill fitful efforts to unite the two rival factions in a coalition government.
A threat by Palestinian President Mahmoud Abbas of Fatah to call early elections fueled the tensions that provoked the violence.
Residents of areas where the fighting was fiercest left to take refuge with relatives, and bulletholes pocked many of the buildings there.
Major roads in Gaza City were blocked by concrete barriers put up by security personnel loyal to both factions, causing traffic jams as drivers were forced on to alternate roads.
Large security details loyal to both groups deployed at major street corners and outside potential targets, like the homes of Abbas and Prime Minister Ismail Haniyeh of the Islamic militant Hamas. Security was also reinforced around Palestinian media outlets, and two Gaza City universities were shuttered.
Late Saturday night, a 12-year-old boy was killed and two people were wounded in northern Gaza during a shootout, witnesses and hospital officials said.
The boy's father, Baher Abu El-Karaya, a local Fatah leader, was injured in the gunbattle. From his hospital bed, he told The Associated Press that Hamas gunmen attacked his home.
In other violence, Hamas gunmen fired mortars at the Abbas-allied Preventive Security Service headquarters and at the home of the force's chief, Rashid Abu Shbak, officials said.
Hamas and an Abbas spokesman appealed for calm on Saturday.
In a clear jab at the moderate Abbas, Haniyeh criticized "troublemakers who are trying to veer away from the path of our people" by receiving "dirty American funding and arms." The White House is seeking some US$85 million to help bolster security forces loyal to Abbas.
Control over the security forces is a focal point of the factions' power struggle. Abbas claims authority over most of the 80,000 Palestinian security personnel, but Hamas controls the Interior Ministry, which is in charge of some of the security apparatuses, and operates its own separate force of 5,000, drawn from the group's military wing.
The longstanding enmity between the two groups turned even deadlier after Hamas swept parliamentary elections in January 2006, ending four decades of Fatah rule.
Some 60 people have died in Gaza since early December alone, following Abbas' pledge to call early elections if coalition talks between Hamas and Fatah fail. Abbas said last week he would move forward with his election plan if the coalition talks failed to produce results within three weeks.
Hamas, which defeated Fatah in parliamentary elections last year, opposes a new vote.
Abbas hopes that by forming a coalition government, he will be able to persuade Israel and the West to reinstate hundreds of millions of dollars in funding to the Palestinian government that they cut off to pressure Hamas to disarm and recognize Israel's right to exist.
Both Fatah and Hamas officials said late Friday that unity talks would be suspended until the fighting ends.
Mediators from two small factions, meanwhile, tried to win the release of hostages taken by the two sides. Late Saturday, seven Hamas activists and four Fatah members were freed in the southern town of Khan Younis, officials said.