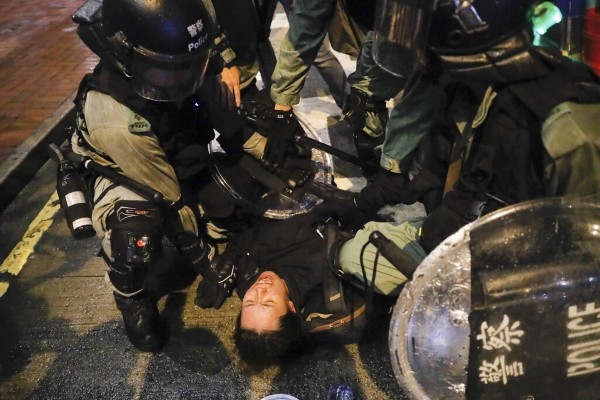 TAIPEI (Taiwan News) -- An editorial published in the German newspaper Die Welt on Tuesday (Sept. 3) suggests that if China cannot ensure the rights and freedoms of the Hong Kong people, the European Union (EU) should establish diplomatic relations with Taiwan and recognize the Dalai Lama as the head of state of Tibet.

In the editorial, Jacques Schuster writes that German leaders are quick to pontificate on morality to Western partners, particularly the U.S. However, when it comes to dealing with Communist China, he says that they show their true colors, fear the consequences of their speeches, and "duck away."

Schuster says that German Chancellor Angela Merkel "worries more about every dying tree on the other side of the equator than about the threatened men, women, and children in Hong Kong." He says that when it comes to Hong Kong, Merkel advises and seeks to moderate both sides, treating them as if they are "equally strong opponents, both bearing the same degree of responsibility for their behavior."

He says that rather than being concerned about human rights in Hong Kong, Merkel is very happy about the billions in profits the German economy rakes in from the Far East. Schuster asks, why Merkel, the most powerful woman in the world, should not "change her itinerary from Wuhan to Beijing to Hong Kong instead?"

Schuster also criticized the EU's foreign affairs chief Federica Mogherini for "showing her teeth in blatant anger" when it comes to Washington's abandonment of the Iran nuclear deal. Yet, he said she suddenly becomes more diplomatic when dealing with China.

The author said that the EU has not once issued a harsh condemnation of China's actions. He said that although the EU is not a force that can shape international developments, when it comes to relations with China, the organization is "weighed down in an astonishing way."

He asserts that China has lost all respect for Europeans. He said that though the West may be in decline, "a civilization can only be destroyed by itself."

Schuster said that although the EU is too weak to send even a single frigate off the coast of China, it is still strong enough economically to say that any step taken by the totalitarian regime towards Hong Kong can hurt. As the third-largest economic power in the world, the EU could threaten to impose economic sanctions against the leadership in Beijing, which would make them think twice about "devouring Hong Kong," especially given its trade war with the U.S.

The EU also has political weapons at its disposal, writes Schuster. If China cannot guarantee the rights and freedoms of Hong Kong citizens under the Basic Law, "then Europe would be forced to establish diplomatic relations with Taiwan and recognize the Dalai Lama as Tibet's head of state."