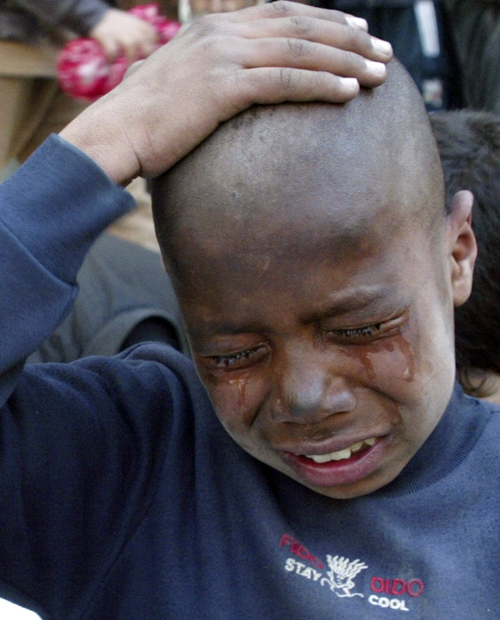 With its spectacular images of blades slicing scalps and bare backs, Ashura is an annual rite observed by millions of Shiites to commemorate the killing of Imam Hussein in 680 at the hands of a Sunni dynasty.
Ashura, which means the tenth in Arabic, falls on the 10th day of the Muslim month of Muharrem and is the culmination of Shiite mourning for their imam's gruesome death in Karbala in present-day central Iraq. The annual rite climaxes today.
A grandson of the Prophet Muhammad, tradition holds that Hussein was decapitated and his body mutilated by armies of the caliph Yazid.
The Shiite faithful mark the painful martyrdom of the Shiite Islam's third imam on what is arguably the most holy day of their year. Dressed in black they beat their chests with their hands or their backs with chains during funeral processions, chanting: "Oh, Hussein!"
Filled with feelings of guilt and remorse, some flail themselves with chains or slice their scalps with swords.
More than three million Shiites came from all over the world in 2006 to commemorate Ashura in Karbala, 110 kilometers south of Baghdad, the site of Hussein's tomb, local authorities said.
Ashura was originally a two-day period of fasting instituted by the Prophet, but its commemoration turned into the foundation of Shiite identity following a split with orthodox Islam over the issue of who would succeed Muhammad.
Hussein's father, Ali, a cousin and son-in-law of Muhammad, was designated caliph in 656 but his authority was disputed and following an inconclusive battle and subsequent negotiations, the governor of Damascus, Muawiya, was named in his place.
A minority, however, insisted the prophet's succession be ensured through his descendants and formed the "partisans of Ali," the Arabic origins of the word Shiite. His son Hussein carried on the fight until the battle of Karbala, which ended in victory for the armies of the caliph Yazid, son of Muawiya. Najaf and Karbala have since become the two most sacred sites for the world's Shiites.