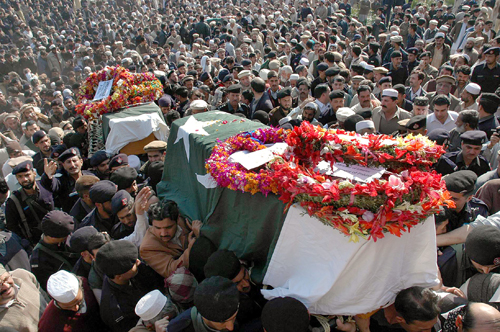 Pakistani police were on high alert in Peshawar yesterday, as more than 2,000 people gathered for funerals of a police chief and fellow officers among 15 victims of a suicide bomb attack in the city.
About 30 people were wounded in the blast on Saturday evening, that went off shortly before Shi'ite Muslims, observing their holiest month of Moharram, were to begin a procession in the heart of North West Frontier Province's capital.
Badshah Gul Wazir, provincial Home Secretary, described how the suicide attacker had struck as police came out of a Shi'ite religious center before the procession was due to begin.
"The man was standing in the street and as police came out of the Imambargah, he made his way into the police team and blew himself up," Wazir said.
Peshawar police chief Malik Mohammad Saad, along with several fellow officers assigned to guard the Shi'ite procession, was among those killed.
"According to the last information we received, 15 people including the suicide bomber have been killed and some 30 wounded, some critically," Wazir said.
Mourners attending the police funerals were frisked before being allowed into the enclosure where prayers were held, while traders and shopkeepers closed in protest against the attack.
It was unclear who was behind the explosion, but Pakistan has been braced for a fresh outburst of sectarian violence during Moharram, when the country's Shi'ite minority mourns the death of one of the heroes of its sect.
Peshawar, home to a large Afghan refugee community, also suffered a wave of suicide attacks late last year, that analysts believe were a spill over from a conflict in tribal lands, where the army is fighting pro-Taliban militants and al-Qaida.
The Peshawar blast came a day after another suicide bomber killed a security guard and himself outside Marriott hotel in a high security zone of the Pakistani capital of Islamabad.
A report in "The News" daily said intelligence agencies suspected Friday's attack in Islamabad may have been carried out by Al-Furqan, a splinter group of Jaish-e-Mohammad, one of the most feared militant groups fighting Indian rule in Kashmir.
Al Furqan is believed to have forged links with al-Qaida, and is more anti-Western than Jaish.
But the motive for the blast at the Marriott remains unclear, as the hotel, which is frequented by western diplomats and businessmen, was also holding a reception later that day for the Indian High Commission to celebrate Republic Day.
The explosion on Saturday night in Peshawar occurred just meters away from Qasim Ali Khan mosque, the largest Sunni mosque in the city, and the Shi'ite community centr, which had just been visited by the police caught in the explosion.
Police had found the remains of the suspected suicide bomber but had not identified what group he might belong to.
The timing and location made it possible that the motive was sectarian, but the slaying of the chief of police raised possibilities that it was militant groups, possibly sympathetic with al-Qaida or the Taliban, who want to destabilize Pakistan's President Pervez Musharraf's government.
While the sectarian conflict between Sunni and Shi'ite extremist groups harks back to the 1980s, some of the most feared Sunni groups have forged links with Osama bin Laden's al-Qaida.
Al-Qaida has used such groups as foot soldiers in attempts to assassinate Musharraf and Prime Minister Shaukat Aziz.
But there is also the possibility that the attack was revenge for the Pakistan army's air strike earlier this month on a militant base in South Waziristan, a semi autonomous tribal region on the frontier with Afghanistan, where Taliban and al-Qaida count on support from tribesmen.