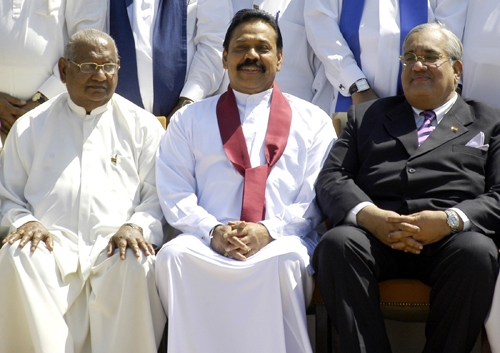 The defection of opposition lawmakers to support Sri Lanka's ruling party yesterday has scuttled chances for a landmark peace deal aimed at ending decades of ethnic bloodshed, officials say.
Sri Lanka's President Mahinda Rajapakse expanded his cabinet to a record 52-members to accommodate 18 defectors from the right-wing United National Party, a spokesman for the president said.
Rajapakse, who is also the minister of defense and finance, gave cabinet positions to 10 defectors while eight others were given junior ministries, the spokesman said, adding that there were several others also waiting to join.
Among the changes, Mangala Samaraweera was stripped of his foreign ministry portfolio and replaced by former investment development minister Rohitha Bogollegama.
The opposition UNP cried foul at the exodus and accused the president of accepting defectors in violation of a deal in October to have a bipartisan approach to resolving the island's ethnic conflict.
The opposition legislators crossing over to the government would give the president a simple majority in the 225-member legislature.
However, the president is still short of a mandatory two-thirds majority in the assembly if he wants to press ahead with any power-sharing arrangement with Tamil Tiger rebels in exchange for ethnic peace.
The UNP said it was no longer bound by an October agreement with Rajapakse to provide him with parliamentary support to work towards a peace agreement with the rebel Liberation Tigers of Tamil Eelam.
"Our memorandum of understanding with the government is over," UNP leader Ravi Karunanayake told Agence France-Presse. "They (the defectors) have traded national interest for their own survival."
Sri Lanka's key international backers, including the United States, European Union, Japan and India had wanted the two main majority ethnic Sinhalese parties to build on their October deal to offer a consensus plan to Tamil Tiger rebels.
Foreign aid donors had asked Sri Lanka's leaders to consolidate the deal and resume negotiations with the Tigers in line with a Norwegian-backed peace initiative. The last round of peace talks in October ended in failure.
Almost 4,000 people have been killed in the past year in escalating violence despite a truce in place since February 2002 in the LTTE-led separatist conflict which has claimed more than 60,000 lives in the past 35 years.
Analysts and diplomats said they feared Sri Lanka's "undeclared war" could escalate.
The worsening violence was underscored Saturday when the LTTE staged an abortive attack against the main sea port of Colombo, a week after the military captured a rebel bastion elsewhere.
"I don't think we will see any movement on the peace front for some time," said Sunanda Deshapriya, a director at the private center for Policy Alternatives think-tank.
Freelance defense columnist Namal Perera said although the Tigers suffered a string of defeats in the island's east, they still had the ability to carry out guerrilla attacks and their suicide cadres were still intact.
"We will see ups and downs," Perera said. "It will be premature to write off the Tigers."