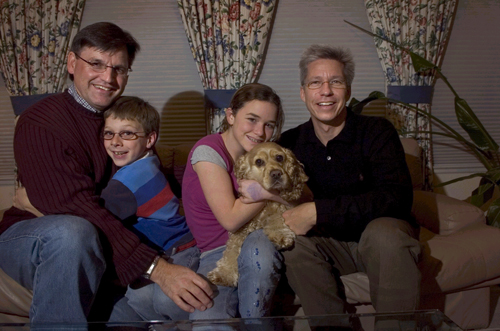 Margaret Maddy Condon-Lorenz grins at her reflection in the picture window and cocks an eyebrow. "The story of how I came to be in a house with two dads," the 12-year-old says with aplomb, "is kind of a miracle."
Giggly and charming, Maddy is the cherished princess of her Elk Grove, California, family: gay dads Ed Condon and Norman Lorenz, and her little brother, Tim. Maddy's adoption in 1995 was the first for a gay couple in Sacramento County, making her both a pioneer and a poster child for same-sex parenting.
"Maddy makes up for the lack of females in this house," Lorenz says affectionately as his daughter dances off to change clothes - again.
The news last month of the pregnancy of Mary Cheney, the U.S. vice president's lesbian daughter, focused attention on a national trend: the number of gay and lesbian parents is on the rise.
Sociologists tracking this say that children of these households tend to be as well-adjusted and successful as offspring from heterosexual households. By some measures, they are faring better.
"It's pretty consistent - the overwhelming finding is that the children are fine," according to Judith Stacey, a sociology professor at New York University and a leading researcher in the area of gender and family. "And there are some findings of certain positive characteristics among them: self-esteem, popularity, warmer relationships with parents.
"These advantages have to do with the obvious fact that these are very desired children. They are unbelievably wanted."
That's clearly the case for Maddy and Tim. For them, having two dads or two moms is perfectly normal. Even, as Maddy says, kind of a miracle.
Condon and Lorenz - their kids call them Daddy Ed and Daddy Norman - have been a couple for 25 years. Condon is executive director of the California Head Start Association and Lorenz is a consultant with the state Department of Education. Previously, they owned several Montessori schools in the region.
After a dozen years together, the men realized they wanted to be parents. In the course of their inquiries into adoption, a pregnant woman sought them out.
She was Maddy's birth mother. "Out of the blue, she asked if we would like to adopt her child," Lorenz recalls. "We matched up with her in January of 1994. In March, Maddy was born."
Maddy's two dads were in the delivery room.
"Then they took me home in a convertible," Maddy announces with mock astonishment. "A convertible!"
Condon took four months off from work to care for the newborn.
"I'd never been left with a baby in my life. At noon on the first day, I called Norman and said: 'You've got to come home!' I was very needy as a new mother." He laughs. "My post-partum anxiety was quite real."
Tim, who is 9, joined the family in 1998 when he was 18 months old.
Perhaps Condon was anxious at first, but today both men are relaxed fathers. They say, and the children agree, that having gay parents has not proved to be a problem - or even an issue - for the kids.
Maddy says people sometimes are a little confused, however. "Almost all my friends already know," she says. "They're, like, OK with it. But a lot of other people assume I have a mom. I just say: 'No, I have two dads.'"
Her friends' mothers often treat her like another daughter.
"It's sweet of them and good for Maddy," Condon says. "Raising a girl has been a different kind of journey for us. It's interesting - we've found that parents of boys are more guarded with us than parents of girls. It's a good thing we had our daughter first - we're more confident now. Maddy blazed the way."
For Mother's Day events, the children usually invite their aunt or grandmother, but last year Lorenz filled the role at tea party.
"Father's Day," Condon says, "is a national holiday in this house."
Ask them about their futures, and the Condon-Lorenz kids sound like a typical boy and girl. Tim: "I wanted to be a policeman and a fireman, but now I think I only want to be a policeman. It's too hard to be both." Maddy: "I want to be an ER nurse and a hair stylist. And an actor."
As for her own gender identity, Maddy has no doubts, according to Lorenz: "She's very clearly told us, 'I am straight.' Maddy loves boys."
"I do," confirms Maddy, still nodding earnestly at her reflection in the window. "I love boys."