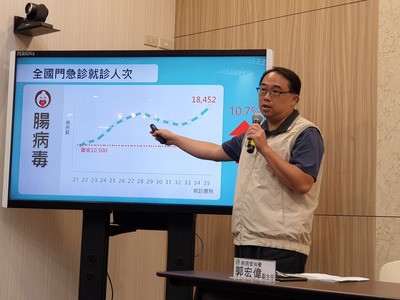 Taiwan's weekly enterovirus cases continued to increase last week, breaching the 18,000 mark, the Centers for Disease Control (CDC) said Tuesday, suggesting that the epidemic is expected to continue into October.

Between Aug. 25 and Aug. 31, a total of 18,452 patients sought outpatient or emergency treatment at hospitals for enterovirus infection around Taiwan, up 10.7 percent from the figure recordedthe previous week, according to CDC data.

It was also the highest weekly figure recorded this year, the center said.

Among them, four were infected with type 71 (EV71) virus and the other with Coxsackievirus-A6, Lin said.

Taiwan has so far recorded a total of 34 severe cases of enterovirus infection this year, of which EV71 has accounted for most, at 25, the CDC said.

EV71 is a neurological disease that attacks the nervous system and infants under the age of 5 are at higher risk of developing severe complications from this type of infection.

The disease center warned that the peak season for the disease is not yet over, saying that the epidemic will most likely continue into October.

CDC Deputy Director-General Philip Lo (羅一鈞), meanwhile, urged the public to take precautions against the spread of the illness, especially among children.

Parents are advised to seek medical attention if their children display symptoms of fever, upper respiratory tract infection, diarrhea, numbness or other symptoms related to enterovirus infection, he said.

The director-general warned that the disease is expected to peak in the next four weeks into October, as children begin to return to school for the new semester.

He also advised schools in Taiwan to take disinfection work around campuses seriously so as to prevent the spread of the disease as enterovirus is highly contagious.