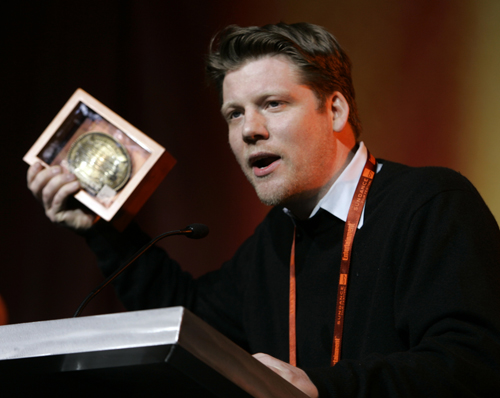 The searing immigrant saga "Padre Nuestro," about a Mexican teen's heartbreaking search for his father in America, won the grand-jury prize for best U.S. drama Saturday at the Sundance Film Festival.
"Manda Bala (Send a Bullet)," another Latin American story recounting government corruption and kidnapping in Brazil, earned the grand-jury award in the U.S. documentary competition at the festival, the nation's top showcase for independent film.
"Grace Is Gone," a tear-jerker starring John Cusack as a father who takes his young daughters on a road trip to postpone breaking the news that their Army sergeant mother has been killed in Iraq, won the audience award for favorite U.S. drama as chosen by balloting among Sundance movie-goers.
Writer-director James C. Strouse won the Waldo Salt screenwriting award for "Grace Is Gone."
The U.S. audience award for documentaries went to Irene Taylor Brodsky's "Hear and Now," a portrait of her aging, deaf parents as they undergo risky surgery that could allow them to hear.
Writer-director Christopher Zalla's debut film "Padre Nuestro" is the story of a Mexican youth (Jorge Adrian Espindola) who sneaks into the United States to find the father (Jesus Ochoa) he never met, only to have his identity usurped by a conniving fellow illegal immigrant (Armando Hernandez) he meets along the way.
Jason Kohn's "Manda Bala" connects such disparate elements as a frog farm used as a front for money-laundering and a plastic surgeon who works on mutilated kidnap victims to capture the violence pervading life in Brazil.
"Manda Bala" also won the documentary cinematography prize for Heloisa Passos.
The jury prize for world cinema was awarded to the Israeli film "Sweet Mud," director Dror Shaul's narrative of a boy coping with his mother's mental illness on a kibbutz in the 1970s.
The Danish film "Enemies of Happiness," Eva Mulvad and Anja Al Erhayem's study of an Afghan woman who bucks patriarchal tradition and runs in her country's 2005 parliamentary election, won the documentary jury prize for world cinema.
The audience award winners for world cinema were given to John Carney's "Once," a drama about an Irish street musician who forges an unusual personal and musical kinship with a Czech woman, and David Sington's British documentary "In the Shadow of the Moon," a chronicle of the Apollo space program.
The U.S. dramatic jury gave two special acting prizes to Jess Weixler "for a juicy and jaw-dropping performance" as a young woman equipped with a lethal genital mutation in the horror comedy "Teeth"; and Tamara Podemski "for a fully realized physical and emotional turn" as an American Indian whose carefree lifestyle leads her to the brink of tragedy in "Four Sheets to the Wind."
The U.S. documentary jury presented a special prize to director Charles Ferguson's "No End in Sight," a study of the Bush administration's handling of the Iraq war. The jury called it a "timely work that clearly illuminates the misguided policy decisions that have led to the catastrophic quagmire of the U.S. invasion and occupation of Iraq."