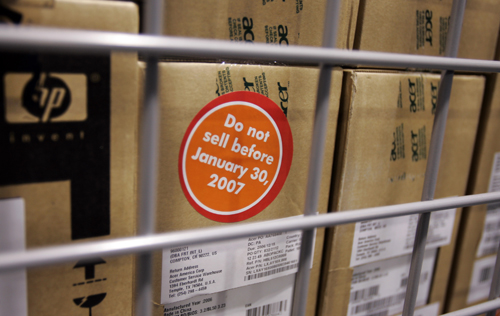 Microsoft risks a new showdown with EU regulators with the roll-out of its Vista operating system nearly three years after a landmark antitrust ruling against the U.S. software giant, officials said.
After numerous delays, Microsoft's next-generation Windows Vista operating system is to make its debut with home computer users on January 30 after it was shipped to business clients in November.
While Microsoft readies to roll out its first revamped operating system in five years, rivals are preparing to do battle again with the IT colossus after already winning one victory in March 2004 with an EU antitrust ruling against the company.
"With Vista, Microsoft has clearly chosen to ignore the fundamental principles of the commission's March 2004 decision," said Simon Awde, the chairman of the ECIS trade association that opposes Microsoft in its antitrust troubles.
ECIS, which includes such tech giants as Oracle, IBM and Nokia, filed a complaint with EU regulators in February 2006 targeting Vista and Office and updated their action with details on Vista last month.
"We are in the process of examining this complaint," said European Commission spokesman for competition issues Jonathan Todd.
Microsoft did not respond to requests for comment on the complaint when contacted on Friday.
The US company has long clashed with the commission over the crushing market power of its existing Windows operating system and was fined a record 497 million euros (642 million dollars) in a landmark March 2004 antitrust ruling.
In addition to fining Microsoft, the EU ordered the company to sell a version of its Windows operating system without Media Player software and to divulge the software protocols underpinning Windows for makers of rival products.
Microsoft challenged the 2004 ruling in the EU's second-highest court in April and the judges are expected to hand down a decision in the first half of the year.
Frustrated with Microsoft's defiance of some of its demands, the commission in July slapped daily fines adding up to 280.5 million euros over the six-month period of the penalty for failing to fully respect the 2004 antitrust ruling.
Microsoft is appealing against the charges.
Meanwhile, the threat of further fines remains as the commission has not yet decided whether Microsoft is meeting its demands.
The company's rivals warn that, as with earlier Windows versions, Vista is designed in a way that makes it difficult for them to build software that is interoperable with it, hampering competition in effect.
"Vista is the first step in Microsoft's strategy to extend its market dominance to the Internet," ECIS' Awde said.
ECIS claims that a computer language Microsoft has written to replace the current standard for publishing pages on the Internet, HTML, was designed to be dependent on Windows, making operations with other platforms difficult.
The association says that Microsoft is also to release a document file format that only operates seamlessly on Microsoft's Office platform unlike the existing format, Open Document Format.
The European Commission is unlikely to open a new antitrust front against Microsoft over Vista before the EU court gives its decision on the regulators' 2004 ruling.